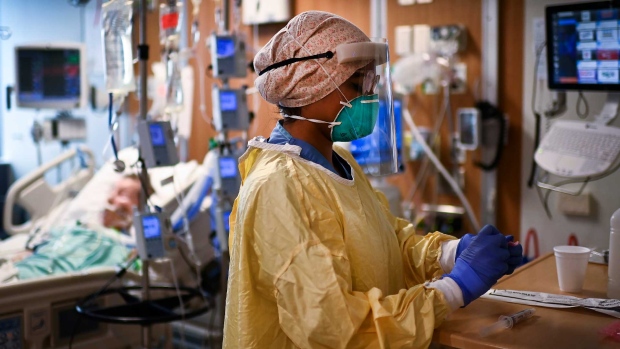 TORONTO — After the start of the COVID-19 pandemic in Canada, there was a significant drop in both referrals and procedures for cardiac issues in Ontario, which led to a higher risk of patients dying while waiting for procedures, according to a new analysis.

The study, published Wednesday in the Canadian Journal of Cardiology, emphasizes the ripple effect that the pandemic has had on other medical conditions.

“In the first wave of the COVID-19 pandemic, we kept hearing stories from patients and other doctors that there were delays in care for patients with heart disease,” Dr. Harindra C. Wijeysundera, a cardiologist, lead investigator of the study and an associate professor at the University of Toronto, explained in a press release.

“We decided to look into these claims using the Ontario database that keeps track of wait lists and wait times for individuals with heart disease who require a procedure or surgery.”

The study looked at information on more than 580,000 patients referred for several common cardiac interventions — from valve surgery to coronary artery bypass grafting — between January 2014 and September 2020, a period of time that includes the first few months of the pandemic.

More than 37,500 of the patients looked at were referred during those 2020 months.

According to the study, while wait times did not increase during the 2020 months as compared to pre-pandemic levels, there was a significant decrease in the amount of referrals for surgery and procedures done themselves.

To come to their conclusions, the study looked at data on patients over the age of 18 housed at the ICES, previously known as the Institute of Clinical Evaluative Sciences, in Toronto, which is one of the largest health databases of the Ontario population.

Researchers followed individual patients until the patient either received a procedure, died while waiting for a procedure, or were removed from the waitlist for another reason.

The biggest change was in the number of referrals for percutaneous coronary intervention (PCI), the term for surgeries to open up a blocked artery. Between March 2020 and September 2020, there were 970 fewer weekly referrals than in pre-pandemic months.

While it sounds small, 0.26 per cent of 37,718 — the number of patients referred during the study period after the pandemic started — means 98 people.

In the group of patients waiting for coronary artery bypass grafting (CABG), there was also an increase in mortality during the pandemic period of the study as opposed to pre-pandemic levels, with 0.64 per cent of patients dying while waiting for surgery compared to 0.59 per cent.

Researchers stated that referrals during the pandemic period was “a significant predictor for increased all-cause mortality for the PCI and CABG groups.”

“We found that the increase in wait list mortality was consistent across patients with stable coronary artery disease, acute coronary syndrome, or emergency referral,” Wijeysundera said. “Coupled with reduced referrals, this raises concerns of a care deficit due to delays in diagnosis and wait list referral.”

Referral during the pandemic wasn’t a predictor for increased mortality in the other surgeries they looked at, researchers found.

Researchers suggested in the study that the fact that wait times didn’t increase but referrals dropped so much could be down to a number of factors, such as patients delaying a visit to the doctor due to COVID-19 fears, or stress on the health-care system that caused delays in access to specialists and testing.

An editorial that accompanied the new study pointed out that even if the numbers aren’t huge, the jump in risk is concerning.

The editorial stated that shifting outpatients on a waiting list based on patients self-reporting a change in symptoms is flawed, particularly during the pandemic

“The system should not be dependent on patient self-reporting for reprioritization on a waiting list,” the editorial stated. “Some patients recognize their symptoms are worsening but are worried about their income if they have to take a leave of absence from work. They may be reluctant to seek care in a health care setting because of fears of contracting COVID-19.”

Patients in a hospital are under observation, but for those who are waiting at home, “nobody is watching.”

“There is, therefore, a need to identify early warning signals of patient deterioration that are independent of personality, COVID-19−avoidance behaviour, and all of the barriers routinely experienced by patients belonging to equity seeking groups,” the editorial stated.

Researchers believe that this risk accounted for if there is a reduction in cardiac procedural capacity due to rising COVID-19 pressure on the health-care system going forward.

“We believe this is highly relevant to the recovery phase of the pandemic,” Wijeysundera said. “Efforts must target not only increasing capacity to treat patients on the wait lists, but also efforts must be made to identify upstream barriers that have prevented patients from getting on the wait list.”