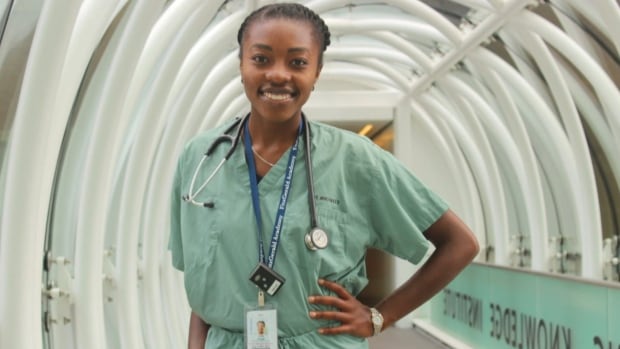 Chika Stacy Oriuwa has wanted to be a doctor since she was a small child.

When she started medical school at the University of Toronto four years ago, she was the only black person in a class of 259 students.

On Tuesday, she graduates as valedictorian. In doing so, she becomes just the second black woman valedictorian and the first woman in 14 years to receive the honour. Dr. Kristine Whitehead, who now practises in Ottawa, was co-valedictorian in 1992 alongside Dr. Gideon Cohen.

“I am extremely pleased to see that Dr. Oriuwa has been recognized by her peers, it is a tremendous honour,” Whitehead said Tuesday in an email to CBC Toronto.

Due to COVID-19, Oriuwa’s  valedictory address will be posted online, and it will contain a message for black medical students who follow in her footsteps, she said.

“Medicine is such an incredible and beautiful profession. And it’s such a privilege and a responsibility to be able to become a doctor, and … they are more than well-equipped to be able to fulfil this role.

“Their place in medical school as black medical students is rightly deserved and rightly earned and to never question that for even for a moment, even if other people question it.”

Oriuwa said she recommends that black medical students have a “resounding sense” of how they define themselves as they pursue their education.

Chika Oriuwa 1st black woman to be valedictorian at U of T’s faculty of medicine 2:08

Oriuwa herself has encountered adversity, including racist and sexist comments and attacks on her character that questioned her ability to be a competent physician.

“One thing that has really strengthened my resolve is, really, this undying sense of conviction that I have as an advocate. I know what my purpose is and what it is that I am called to do,” she said.

“And I think that being strengthened and bolstered by the community is something that also allows me to do the work that I know is necessary.”

Her four years of advocacy work, speaking engagements and mentoring others has made a difference.

Twenty-four black medical students were admitted to the University of Toronto’s faculty of medicine for the class of 2024. It is the largest group in Canadian history.

We wanted to take a little break from the bad news to bring you all something amazing!<br><br>We’ve just learned that there have been 24 Black Medical Students admitted to <a href=”https://twitter.com/uoftmedicine?ref_src=twsrc%5Etfw”>@uoftmedicine</a> for the class of 2024!!?<br><br>This is the largest group in Canadian history ??<br><br>Welcome to the family❤️ <a href=”https://t.co/a51Il4LRFF”>pic.twitter.com/a51Il4LRFF</a>

Oriuwa’s valedictory address is already videotaped but will stream on Tuesday.