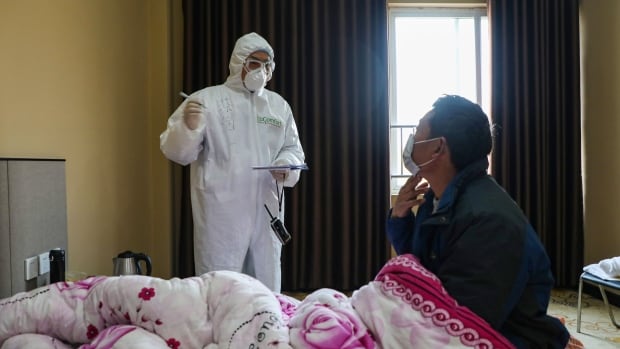 China on Thursday finished building a second new hospital to isolate and treat patients of a virus that has killed more than 560 people and continues to spread, disrupting travel and people’s lives and fuelling economic fears.

A first group of patients was expected to start testing a new antiviral drug, as China also moved people with milder symptoms into makeshift hospitals at sports centres, exhibition halls and other public spaces.

The health-care system in the central city of Wuhan, where the outbreak was first detected in December, has been overwhelmed with the thousands of ill patients. A new, 1,500-bed hospital specially built for virus patients opened days after a 1,000-bed hospital with prefabricated wards and isolation rooms began taking patients.

Other treatment centres had tight rows of simple cots lining cavernous rooms. And Wuhan had another 132 quarantine sites with more than 12,500 beds, according to the official Xinhua News Agency.

Chinese health authorities reported 563 deaths and another sharp jump in the number of confirmed cases to 28,018. Outside mainland China, at least 260 cases have been confirmed, including two deaths in Hong Kong and the Philippines.

The viral outbreak has infected more than 28,200 people globally. Of those, 28,018 of the cases have been in China.

Hospital workers in Hong Kong demanding a shutdown of the border with the mainland were on strike for a fourth day. Hong Kong leader Carrie Lam announced a 14-day quarantine of all travellers entering Hong Kong from the mainland starting Saturday, but the government has refused to seal the border entirely.

A Hong Kong medical union warned that its 20,000 members could resign en masse if the city’s Hospital Authority refuses to speak with them over their demands. It estimated 7,000 were on strike and said those who were working were worried about their safety.

WATCH: Canadian stuck on cruise ship shows what it’s like

Trudy Clement shows what it’s like to be among 251 Canadians quarantined on a cruise ship off Japan. 7:18

The outbreak of the new type of coronavirus has also ensnared two cruise ships, with the passengers and crew now quarantined on the docked vessels in Hong Kong and Japan.

Ten passengers confirmed to have the virus were escorted off the Diamond Princess at a port near Tokyo, after 10 others were taken off the previous day. The group taken to hospitals Thursday are mostly passengers in their 60s and 70s. Of the passengers taken to hospital Thursday:

Tests are still pending on others on board who had symptoms or had contact with infected people.

More than 3,600 passengers and crew on the Hong Kong ship, the World Dream, were being screened after eight passengers from a voyage that began Jan. 19 were diagnosed with the virus. Hong Kong health authorities said more than 5,000 passengers travelled on that cruise and two others before the ship was quarantined Monday.

Xinhua said clinical trials for the antiviral drug Remdesivir have been approved and the first group of patients is expected to start taking the drug on Thursday. Word of the trials had boosted the stock price of the drug’s maker, American biotechnology company Gilead Sciences Inc.

Antivirals and other drugs can reduce the severity of the virus, but “so far, no antivirals have been proven effective,” said Thanarak Plipat, a doctor and deputy director-general of Thailand’s Disease Control Department of the Health Ministry. He said there were a lot of unknowns, “but we have a lot of hope, as well.”

WATCH: What we know about the coronavirus

Infectious disease expert Dr. Allison McGeer tells The National about the spread of coronavirus and if masks really help. 1:49

China’s National Health Commission said the number of infected patients who were “discharged and cured” stood at 1,153 as of Thursday. Details weren’t given, but milder cases have been seen in younger, healthier people. The new virus is in the coronavirus family that includes MERS and SARS, and it causes fever, cough and shortness of breath, and in severe cases, pneumonia.

China has strongly defended its epidemic control measures, including locking down several cities in central Hubei province, where the outbreak has been concentrated.

More than 50 million people are under virtual quarantine in Hubei, but outlying cities, towns and villages have enacted varying restrictions and other countries have severely restricted travel to and from China.