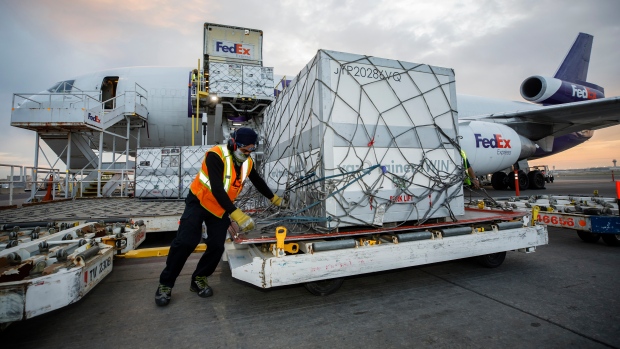 OTTAWA — The Canadian Medical Association and a group of domestic and international activists are calling on the federal government to do more to boost COVID-19 vaccination efforts in less developed countries in order to end the pandemic.

Raising the international vaccination rate in less prosperous countries is the only way to prevent the emergence of new COVID-19 variants that are prolonging the pandemic through an endless cycle of lockdowns and serious illness, said Dr. Katharine Smart, the president of the leading association of Canadian medical professionals.

“Without taking this perspective, we will continue to find ourselves in a perpetual cycle of pandemic management, with new variants and mutations developing in countries where vaccine rates remain low,” Smart said Wednesday.

“Approximately half the world’s population is not yet fully vaccinated, giving the virus plenty of opportunity to mutate and change. By protecting other countries, we are also protecting Canadians.”

The association was joined by international anti-poverty group the ONE Campaign, as well as the African Canadian Association of Ottawa and others, in calling on Canada to do more to support COVAX, the global COVID-19 vaccine-sharing alliance.

More than two-thirds of 10 billion vaccine doses administered in the world have gone into arms in high and upper-middle income countries, where more than two-thirds are considered fully vaccinated and one in three have a third dose.

Meanwhile, nine out of 10 people in 28 low-income countries have yet to receive a single dose.

Hector Addison, the head of the African Canadian Association of Ottawa, said more people of African descent have died from COVID-19 than any other group, in part because so many are front-line workers who do not have the luxury of working from home.

He said less than one per cent of Africa is vaccinated, which has overwhelmed health care, decimated economies and led to social upheaval.

“Vaccine inequity stemming from hoarding and vaccine nationalism has combined to rain untold hardship on Africa,” he said.

“These have been more coup d’etats in Africa in the last 18 months alone than there were in the last 15 years.”

Canada hasn’t sent any new doses to COVAX since Dec. 21, after pledging to deliver 50 million directly along with enough cash for 150 million more by the end of this year.

Smart said the CMA is grateful for Canada’s support of COVAX, which includes a financial commitment of $2.5 but the federal government needs to do more by boosting donations, helping build greater capacity to administer vaccines in low- and middle-income countries and growing the country’s domestic vaccine capacity.

Independent Sen. Peter Harder called on MPs from all political parties to support a motion by Liberal MP Nathaniel Erskine-Smith that calls on the government to increase its international vaccine spending by $1.1 billion.

“The pandemic won’t end and there will continue to be new variants as long as we fail to put the needs of the most vulnerable people first in the world,” said Stuart Hickox, the Canadian head of ONE.

“It puts us in jeopardy by creating the perfect conditions for new variants to emerge, that threatened to completely undo the progress that we had made to end the pandemic.”

This report by The Canadian Press was first published Feb. 2, 2022.