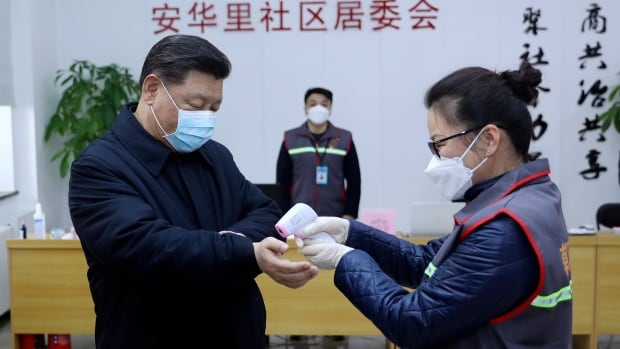 The World Health Organization said Tuesday there have now been 42,708 cases of the new coronavirus reported in China as of midnight ET, leading to 1,017 deaths.

At a briefing in Geneva, WHO Director-General Tedros Adhanom Ghebreyesus said that outside China, there have been 393 cases and one death confirmed in 24 countries.

He also said the new coronavirus had been named COVID-19, explaining that it was important to avoid the stigma of associating it with any particular country and that other names could be inaccurate.

WHO explains why it is important to find an exact name for the deadly coronavirus. 1:22

The first vaccine targeting China’s coronavirus won’t be available for 18 months, “so we have to do everything today using available weapons,” Ghebreyesus said.

Officials say all the passengers aboard the plane were screened and have exhibited no symptoms of the novel coronavirus.

They’ll be placed under quarantine at CFB Trenton with the 213 Canadians and family members who arrived from Wuhan last week.

The flight crew has been examined, and Canada’s chief public health officer, Dr. Theresa Tam, decided all 25 of them can be safely released from quarantine, because they did not spend time in the centre of the outbreak and they followed appropriate infection prevention and control protocols.

This latest flight was the last one planned to carry Canadians out the part of China where the new virus was first detected.

China’s daily death toll from a new virus topped 100 for the first time and pushed the total past 1,000 dead, authorities said earlier Tuesday, after leader Xi Jinping visited a health centre to rally public morale amid little sign the contagion is abating.

Though more offices and stores in China were reopening after the extended Lunar New Year break, many people appeared to be staying home. Public health authorities are closely monitoring whether workers’ returning to cities and businesses resuming worsens the spread of the virus.

WATCH | CBC’s Saša Petricic reports from Beijing, where the outbreak has led to an eerie emptiness:

CBC’s Sasa Petricic looks at how the coronavirus outbreak has brought an eerie emptiness to the normally jam-packed streets of Beijing and how people are responding. 2:11

Xi’s appearance comes amid questioning of the government’s handling of the crisis, particularly the failure of local officials in the worst-hit city of Wuhan to clarify the extent of the crisis.

Public anger has been inflamed over the death of a young doctor from the virus who had earlier been threatened along with seven others by police for warning online of the potential for a major outbreak as early as December.

The virus outbreak has become the latest political challenge for Xi, who despite accruing more political power for himself than any Chinese leader since Mao Zedong, has struggled to handle crises on multiple fronts, including a sharply slowing domestic economy, trade with the U.S. and push-back on China’s increasingly aggressive foreign policies.

As the number of deaths from the virus rose in China, the head of the World Health Organization (WHO) said the outbreak poses a “very grave threat for the rest of the world.”

WHO director-general Tedros Adhanom Ghebreyesus was addressing the start of a two-day meeting aimed at accelerating development of drugs, diagnostics and vaccines against the flu-like virus amid growing concerns about its ability to spread.

“With 99 per cent of cases in China, this remains very much an emergency for that country, but one that holds a very grave threat for the rest of the world,” he told more than 400 researchers and national authorities, including some taking part by video conference from mainland China and Taiwan.

The National Health Commission said in its daily update that 108 deaths had been reported over the previous 24 hours, increasing the total to 1,016 deaths in mainland China since the illnesses began appearing in December. The total is well beyond the toll of the 2002-03 outbreak of SARS, or severe acute respiratory syndrome, which is caused by a different coronavirus related to the current pathogen.

The number of newly confirmed cases fell slightly to 2,478 from 3,062 the day before, bringing the total to 42,638 on the mainland. Some of the patients have since been cured and released from hospital.

A report in the New England Journal of Medicine claimed a woman who wasn’t showing symptoms triggered a chain of coronavirus infections. Infectious disease specialist Dr. Isaac Bogoch explains how the report got it wrong. 3:25

The coronavirus outbreak, which is centred in Wuhan, China, has caused concern around the world as experts struggle to learn more about the virus. A second Canadian charter flight carrying people who had been in Hubei province landed at CFB Trenton in Ontario Tuesday morning. The people on board the flight will spend 14 days living on the base under quarantine, as are the passengers who arrived on an earlier flight.

In Hong Kong, authorities partially evacuated an apartment block after two cases among its residents raised suspicion the virus may be spreading through the building’s plumbing.

Two confirmed cases were found on different floors of a suburban apartment block.  0:49

More than 440 cases have been confirmed outside mainland China, including two deaths in Hong Kong and the Philippines.

Of those, 135 are from a cruise ship quarantined in Yokohama, near Tokyo. Japan’s Health Minister Katsunobu Kato said the government was considering testing everyone remaining of the 3,711 passengers and crew on the Diamond Princess, which would require them to remain aboard until results were available.

Rebecca Frasure, one of the Diamond Princess passengers who tested positive for coronavirus, said she “was really dumbfounded” when she was diagnosed.

Fraser, who is from Oregon, is currently being monitored in a Tokyo hospital. She said she feels well and no longer has any symptoms.

“Basically, I’m just in isolation so as not to pass it along to anyone else,” she told CBC’s Heather Hiscox.

She’ll be tested again 14 days after her diagnosis. If the two required tests come back clear, she can be reunited with her husband, who is still living under quarantine aboard the cruise ship.

WATCH: Passenger who tested positive for coronavirus speaks from isolation in hospital.