Canada’s COVID-19 vaccination campaign kicked off on Monday with the vaccinations of a long-term care resident in Quebec City and a personal support worker in Toronto.

Anita Quidangen, a personal support worker at the Rekai Centre in Toronto, received one of the first doses of the Pfizer-BioNTech vaccine given in Canada. There were cheers and clapping as Quidangen got her vaccine shortly before 12 p.m. ET — a major milestone in the fight against the novel coronavirus that has infected more than 468,000 people and left more than 13,500 people dead in Canada alone.

Quidangen was the first of five front-line health professionals who got a dose of the vaccine, which requires two doses several weeks apart, at a site in the University Health Network, a system of hospitals and health-care facilities throughout the city.

The Ontario government said Quidangen was the first person in Canada to get the Pfizer-BioNTech vaccine, but it was later confirmed that Gisèle Lévesque, an 89-year-old resident of a long-term care facility in Quebec City, had been vaccinated several minutes earlier.

Lévesque was vaccinated before a small crowd of health-care workers. She smiled after receiving the shot and was given a round of applause. 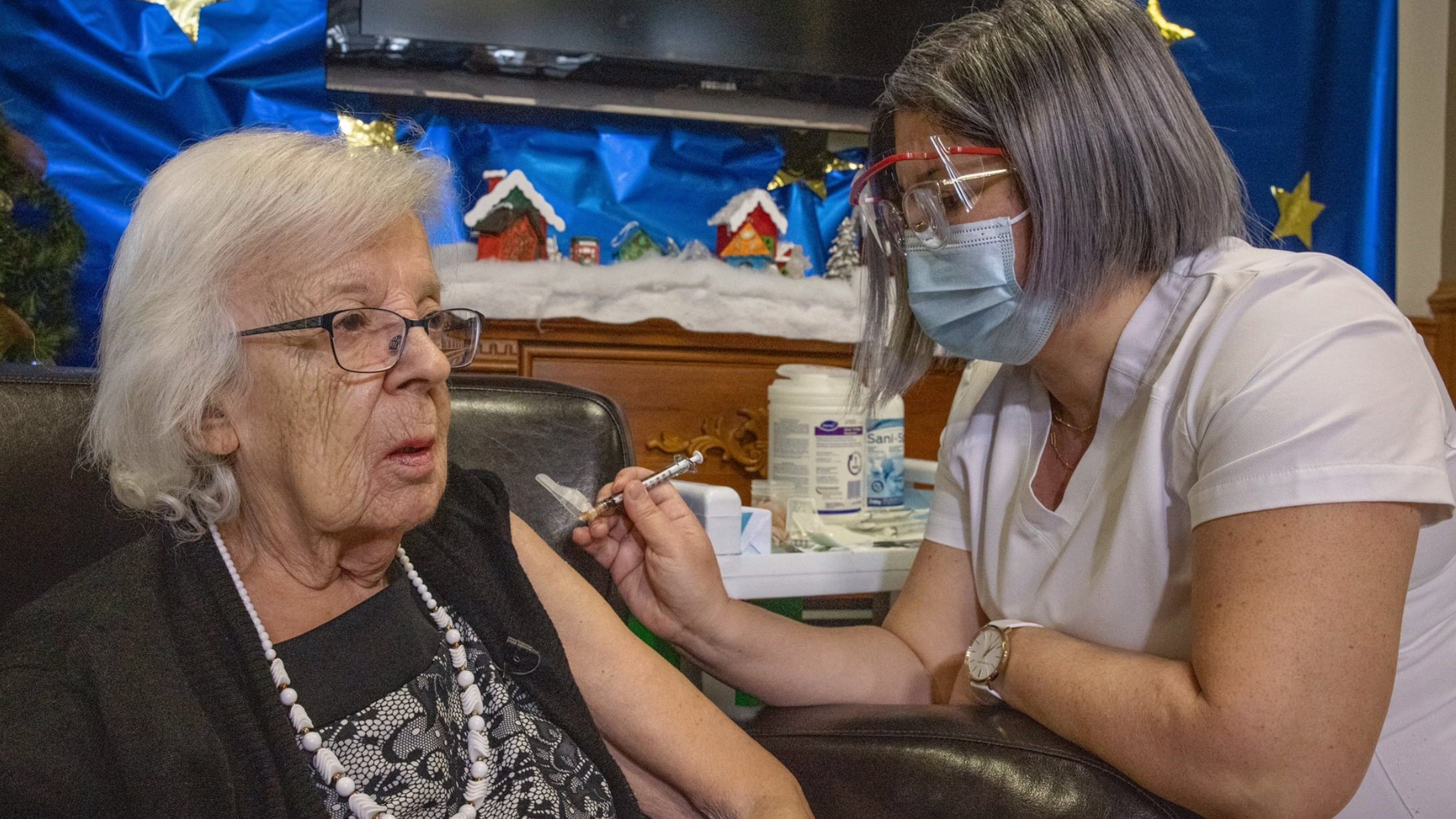 Retired general Rick Hillier, who is leading Ontario’s vaccine task force, said the number of vaccinations that will take place in the province on Monday is “probably pretty small,” but he said it’s still significant — especially for health-care workers and others who have been at the front line of the pandemic for months.

“This is V-Day,” he told CBC News Network early Monday, before the first dose was given. 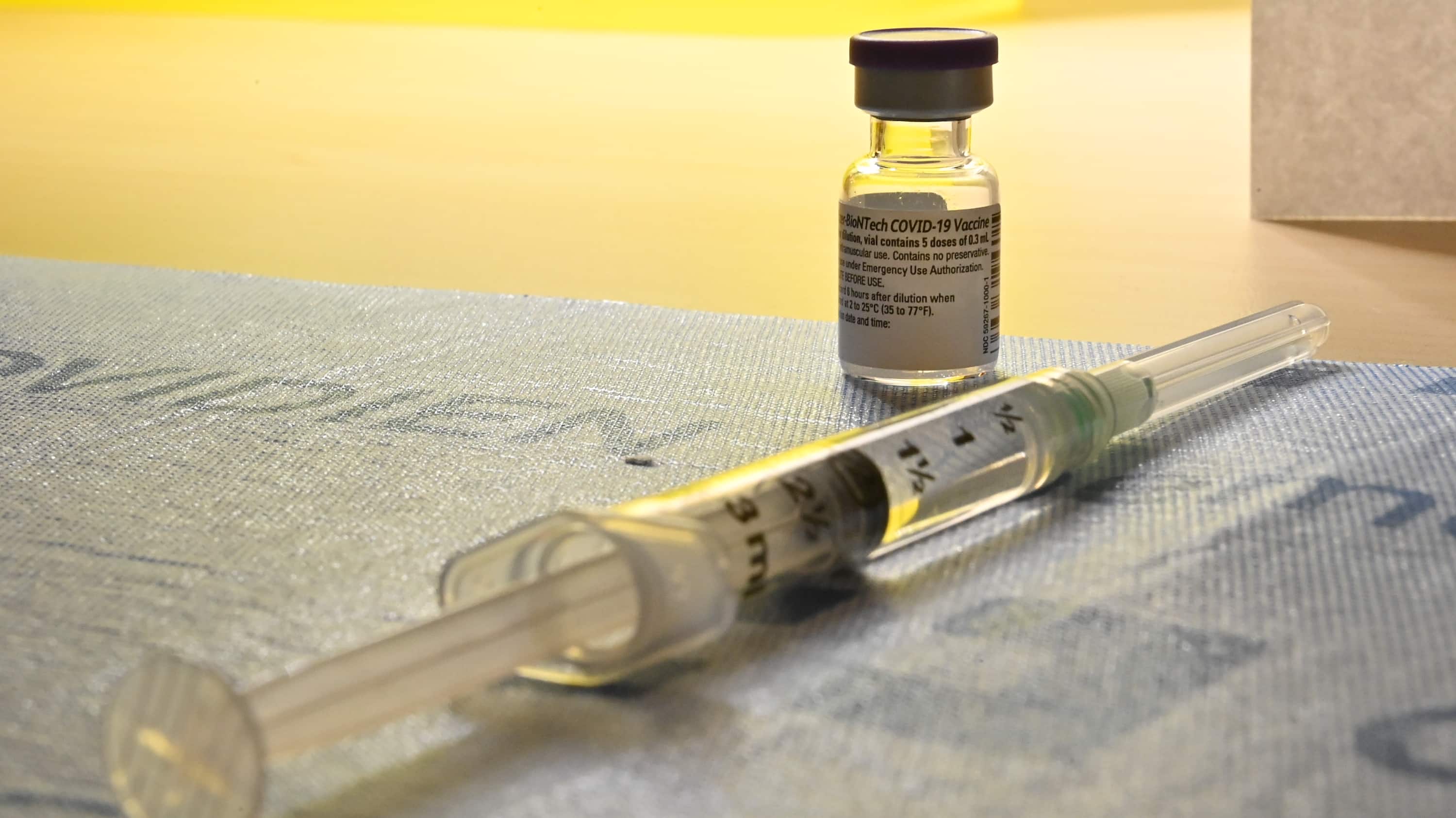 Retired general Rick Hillier, head of Ontario’s vaccine task force, calls the arrival of the COVID-19 vaccine ‘an incredible day.’ ‘We’re on the way out of the abyss,’ he said.   0:50

He said there will be challenges and problems ahead as the province works through what will eventually be a massive vaccination campaign.

“That’s exactly what we want — we want those problems and challenges because it means we’re on the way out of the abyss,” he told CBC’s Heather Hiscox.

Ontario’s vaccination effort was initially expected to begin later in the week, but Hillier said that the Toronto effort would begin Monday.

“We don’t want to waste any time here,” he said.

Ontario is putting the required second dose aside for the first groups of people receiving the Pfizer-BioNTech vaccine. That system could change as the delivery protocol changes, but for now officials have said they want to ensure that all the people who receive the first vaccine will be able to access their second shot.

Maj.-Gen. Dany Fortin, who is handling the logistics of Canada’s vaccine rollout, said on Sunday morning that the delivery schedule is “unfolding exactly as planned.”

Fortin told Rosemary Barton, CBC’s chief political correspondent, that provinces confirmed they are ready at the 14 initial locations for the Pfizer-BioNTech vaccine, which needs to be kept at extremely cold temperatures.

Prime Minister Justin Trudeau has said that the logistical challenges associated with distributing the vaccine mean it won’t be going to the northern territories right away.

COVID-19 hospitalizations in Ontario increased to 857, with 244 people in intensive care units, according to a provincial dashboard.

In an interview with Radio-Canada’s Le Téléjournal, Premier François Legault said he will announce new measures on Tuesday to clamp down on businesses.

The largest vaccination campaign in U.S. history got underway Monday as health workers in select hospitals rolled up their sleeves for shots to protect them from COVID-19 and start beating back the pandemic.

Vaccinations also began in California, with intensive care unit nurse Helen Cordova receiving a shot of the Pfizer-BioNTech vaccine at Kaiser Permanente Los Angeles Medical Center. Gov. Gavin Newsom, who watched and applauded, tweeted that Cordova was one of the first Californians to be vaccinated.

Shipments of precious frozen vials of vaccine made by Pfizer Inc. and its German partner BioNTech began arriving at hospitals around the country Monday.

The virus has infected more than 16.4 million people and killed more than 300,000 people in the U.S., the hardest-hit country in the world.

There are 386 COVID-19 patients in hospital, 39 of whom are in intensive care. Data on hospitalizations and ICU admissions in the Prairie Mountain Health region were not available Monday due to technical issues, the province said.

Shamattawa First Nation is battling one of the worst outbreaks of the virus in the province. A second contingent of Canadian Armed Forces members arrived on Sunday night to assist.

In Saskatchewan, the province is restricting most private gatherings to household members only starting Thursday, with other rules to take effect in the following days, as COVID-19 cases continue rising.

Health officials reported 269 new cases and two additional deaths on Monday. There were 124 people with COVID-19 in hospital, including 27 in intensive care, according to provincial data.

Among the other public health restrictions announced Monday: Outdoor gatherings will be capped at 10 people; casinos and bingo halls must shut down starting Dec. 19; and retail services will be reduced to half capacity, with large retail locations reduced to 25 per cent capacity, starting Christmas Day.

Alberta reported a record 1,887 new cases and 15 new deaths on Monday, a day after tight new public health restrictions came into effect across the province.

The province, which has faced a steep climb in hospitalizations in recent weeks, said 716 people are in hospital with COVID-19, with 136 in ICU.

The additional restrictions that went into place on Sunday require some businesses — such as bars and hair salons — to close down in-person service, while others must limit their capacity.

At a news conference on Monday, Health Minister Tyler Shandro said Alberta plans to administer first doses of the COVID-19 vaccine to 29,000 health-care workers by the end of December.

The province will begin immunizing ICU doctors and nurses, respiratory therapists and eligible continuing-care staff in Edmonton and Calgary on Wednesday, he said.

British Columbia, which doesn’t provide updated COVID-19 data to the public over the weekend, on Monday reported 2,146 new cases and 49 additional deaths.

There are 359 people in hospital with COVID-19, including 87 in intensive care.

The numbers come as the province prepares to immunize its first residents on Tuesday. The first vials of the vaccine, some 4,000 doses, will be distributed this week to front-line health-care workers and long-term care home workers in the Vancouver Coastal Health and Fraser Health regions.

In Atlantic Canada, Newfoundland and Labrador reported one new case of COVID-19 on Monday.

Across the North, Nunavut reported nine new cases of COVID-19 on Monday, all of them in Arviat.

Yukon reported one new case on Monday, while the Northwest Territories reported no new cases.

From The Associated Press and Reuters, last updated at 7 p.m. ET

As of 7 p.m. ET on Monday, there were more than 72.6 million cases of COVID-19 reported worldwide, with more than 47.4 million of those considered recovered or resolved, according to a database maintained by Johns Hopkins University. The global death toll stood at more than 1.6 million.

In COVID-19 vaccine news, family doctors in England are set to start COVID-19 inoculations this week, in the latest stage of the U.K.’s mass vaccination program. The National Health Service said hundreds of general medical clinics across England were taking delivery of the Pfizer-BioNtech vaccine on Monday and that some would start offering the shots by the afternoon. The majority, though, will begin on Tuesday, it said.

Priority will go to people who are 80 and older, as well as staff and residents of care homes.

The first shipments of COVID-19 vaccine in the United States moved to distribution points around the country, while the European Union weighed donating five per cent of its COVID-19 vaccines to poorer nations.

WATCH | U.K. doctors to begin vaccinations in their clinics: 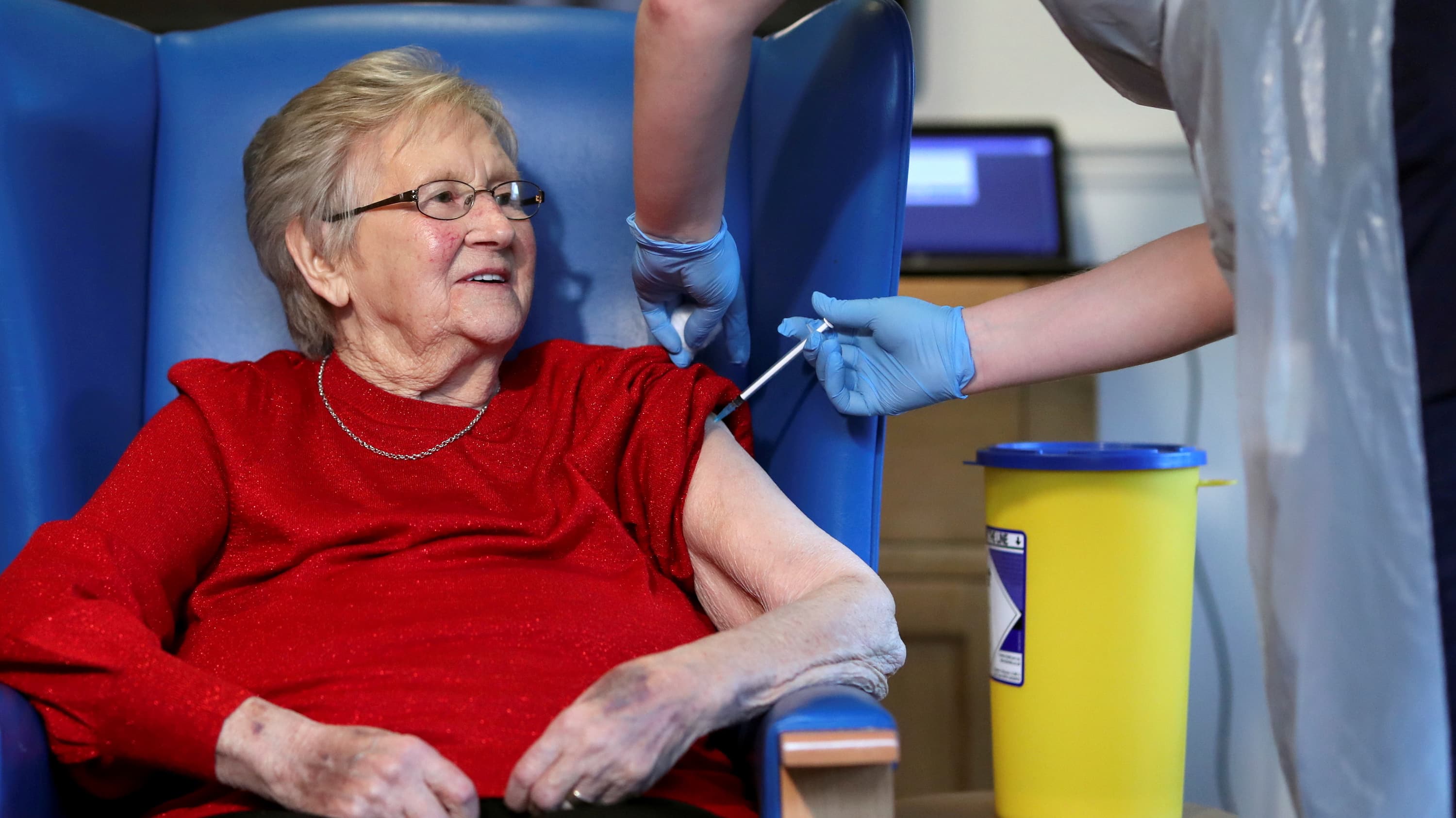 About 100 family doctors in the U.K. begin the challenging task of inoculating patients in their offices with the Pfizer-BioNTech COVID-19 vaccine, which needs very special handling. 2:13

Singapore, meanwhile, has become the latest country to approve Pfizer-BioNTech’s vaccine for pandemic use and expects delivery of the first shots by the end of December, its prime minister said.

German pharmaceutical company CureVac, meanwhile, said it has enrolled the first participant in the Phase 3 clinical study of its mRNA-based COVID-19 vaccine candidate. The Tuebingen-based company said the study is expected to include more than 35,000 participants at sites in Europe and Latin America.

In the Americas, the U.S. death toll from the coronavirus has topped 300,000, according to Johns Hopkins University based on data supplied by health authorities across the U.S.

The real number of lives lost is believed to be much higher, in part because of deaths that were not accurately recorded as coronavirus-related during the early stages of the crisis.

With cold weather driving people inside where the virus spreads more easily, and many Americans disdainful of masks and other precautions, some public health authorities project 100,000 more could die before the end of January.

Jennifer Nuzzo, a public health researcher at Johns Hopkins, contrasted the government’s scattershot response with the massive mobilization undertaken after nearly 3,000 Americans were killed in the Sept. 11, 2001, terrorist attacks.

“To think now we can just absorb in our country 3,000 deaths a day as though it were just business as usual, it just represents a moral failing,” she said.

In Africa, the government of Eswatini has announced on Twitter that Prime Minister Ambrose Dlamini has died after testing positive for COVID-19. The 52-year-old Dlamini, who had been prime minister since 2018, announced in November that he had tested positive for the virus and was being treated at a hospital in neighbouring South Africa.

South Africa is experiencing a resurgence of COVID-19 and President Cyril Ramaphosa is scheduled to address the nation Monday evening on the country’s response.

In the Asia-Pacific region, South Korea ordered schools to close from Tuesday in the capital Seoul and surrounding areas as it battles its worst outbreak since the pandemic began.

Meanwhile, Singapore became the first Asian country to approve Pfizer-BioNTech’s coronavirus vaccine and said it expects to start receiving shots by the end of the year.

In Europe, London will move into England’s highest tier of COVID-19 restrictions, the government said on Monday, citing increased infection rates that may be partly linked to a new variant of the coronavirus.

Health Secretary Matt Hancock said more than 1,000 cases of the new variant had been identified, mainly in southeastern England. Although there was currently nothing to suggest the new strain was likely to cause more serious disease or that it would not respond to a vaccine, Hancock said that it could be contributing to higher infection rates.

The tougher Tier 3 restrictions will come into force in the capital on Wednesday. The main difference between England’s top alert levels is that bars and restaurants, which can stay open under certain conditions in Tier 2, must close their doors in Tier 3 and can only operate takeout and delivery services. There are also additional curbs on socializing in Tier 3.

Italy on Sunday registered 484 confirmed COVID-19 deaths, one of its lowest daily death tolls in about a month. But those latest deaths were enough to eclipse Britain’s toll as having Europe’s highest toll in the pandemic, according to tracking done by Johns Hopkins.

In the Middle East, Israeli Prime Minister Benjamin Netanyahu’s office said he has gone into isolation after being exposed to someone who tested positive for the coronavirus.

It said Netanyahu himself was tested on Sunday and Monday, and that both tests came back negative. He will remain in isolation until Friday. Netanyahu and other senior Israeli officials have periodically gone into isolation after possible exposure to the virus since the start of the pandemic.