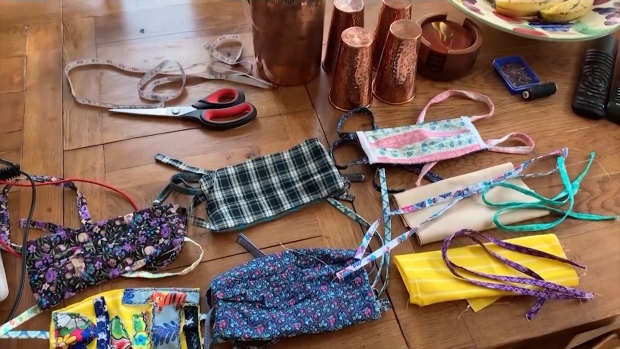 VANCOUVER — As masks become part of our daily attire, many people might be wondering about what the best ones are made from.

The simple answer, according to UBC mechanical engineering professor Steve Rogak, is there’s nothing better than an N95 mask.

But he told CTV News Thursday there are lots of homemade materials that work very well.

“We ended up testing 41 different types of materials that you could potentially use for such types of masks,” he explained. “It turns out that many of the common materials are pretty good at removing most of those particles.”

The team used a machine that placed a circular cut of fabric inside a sealed container. Rogak said this allowed them to flow a stream of air containing aerosol particles through the filter material.

“We can measure the pressure drop across the material, and we measure the aerosol concentration before and after the filter,” he explained. “And by the difference, we know what’s been removed by the filter.”

They also measured the breathability of certain fabrics.

“You want something that’s breathable, removes particles and is comfortable,” Rogak said.

He and his team tested materials such as medical gauze and polyester.

When it comes to medical gauze, Rogak said it’s breathable and has a very open-weave material.

“But, it turns out, if you have enough layers, it’s very effective at removing particles,” he said.

That’s in part because it has bundles of fibre that are frayed with even finer fibres coming off that, he explained.

But the drawback with the gauze, he said, is it requires a lot of layers, so it can get bulky and hot.

One of the best materials Rogak said he found was double-knit cotton. It was one of the first the team tested, and Rogak said one of the test pieces came from his wife’s childhood figure skating costume.

Rogak says he would pair that with a filter made of a dried baby wipe, because they have a structure which is actually closer to N95 masks.

When comparing the homemade versions to commercial non-medical masks, Rogak said the material is typically better, but, “for me this kind of masks fits terribly and I have to modify it with wires and things so I don’t fog up my glasses.”

But he added that it almost doesn’t matter what the mask is made of if it doesn’t fit properly and there are gaps.

“It will totally negate the filtration properties,” he said.

That becomes particularly important depending on face shape and if you have facial hair.

“Normally, when you get fitted for an N95 mask, you would have to shave. It would be part of the job to have an appropriate fit and have that tested,” said Rogak.

He also added there isn’t actually a lot of information on how to fit masks to men with beards.

“If you had a beard, you could presumably make a larger mask that seals over a larger area,” he said, adding the same goes for nose size and face shape.

For those who wear glasses, Rogak suggests trying on your mask while wearing them.

“Wear some glasses, and you may find out very quickly whether it’s fitting properly or not,” he said, adding that you’ll find out quickly whether there is a full seal if the glass starts to fog.

As for whether the outer layer needs to be waterproof, Rogak said that’s really more for high-risk areas like hospitals and during surgery.

“If you believe you need something water resistant, then you could use a polyester (mask), but you have to make sure it’s breathable,” he said, adding that it should be a style like the N95 with a cone shape around the face.

“As you see,​ some people wearing masks, they inhale, and you can see that they’re only breathing through a small area of the mask material,” said Rogak. “That’s going to increase the pressure drop many times compared to a mask that has a bit of a pocket.”