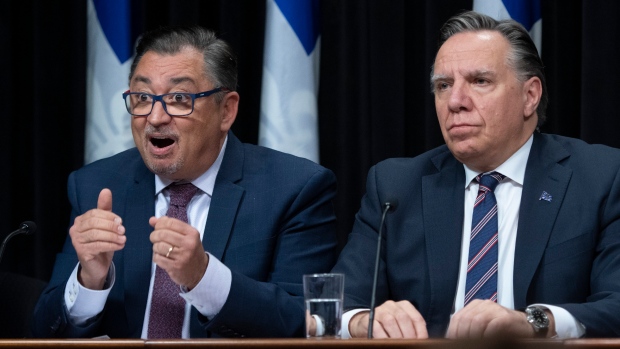 In addition, 3,073 people are under investigation, and another 3,079 tests have come back negative, Legault said at a press conference in Quebec City Monday afternoon.

So far, Montreal has the most recorded instances of the virus, with 18 confirmed cases as of 2 p.m.

The province is asking anyone who has questions or concerns about coronavirus to call 1 877 644 4545.

In an effort to encourage people to self-isolate if they have symptoms or have returned from abroad, the Quebec government is providing financial compensation to those who don’t qualify for employment insurance.

People shouldn’t hesitate to self-isolate, Legault said, even if they’re afraid to lose money from lack of work, so the government is committing $573 per week to workers who are self-isolating. Most people will only need the money for two weeks, Legault said, but those who have symptoms and have to self-isolate longer, it will be extended to a maximum of 4 weeks.

“We’re counting on everyone’s good faith,” Legault said at an afternoon press conference, noting that the program was meant for those who don’t have employment insurance and lose their income when they self-isolate.

In addition to the measures meant to support individuals, Legault explained, the government would later announce measures to ease the economic impact of the virus — which is likely to be severe and prolonged.

The crisis will lead to fewer exports of goods, Legault said, and businesses will have difficulties acquiring materials. Tourism will also take a hit, he said, and as stock markets around the world plunge, Quebecers who have money invested will have less spending power.

Legault said his government would support businesses, easing their access to government loans and, as the private sector slumps, the government will increase its investments to keep the economy fueled. It’s a good time for the Quebec government to create construction jobs and inject money into the economy by investing in the health system, roads and education, he explained.

As the health system prepares for a jump in the number of cases of the virus, Legault said the health ministry has received some 7,000 applications who want to help deal with the COVID-19 pandemic.

In response to widespread complaints from Quebecers about difficulties getting service from the province’s coronavirus line, Health Minister Danielle McCann said by Thursday the line will be staffed by 250 nurse operators, up from the current staffing level of 55.

The delay is to complete the three-day training required for nurse-operators, McCann said.

Legault also said he was pleased with Prime Minister Justin Trudeau’s announcement Monday that Canada will be closing its borders to foreign travellers effective Wednesday.