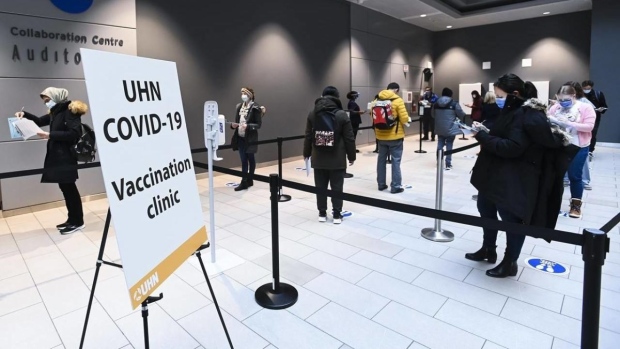 TORONTO — Getting an annual COVID-19 vaccine booster shot will likely become an annual ritual much like flu vaccinations, due to the need for reinforced immunity and dealing with new variants that could emerge, says one Ottawa epidemiologist.

“It’s looking pretty likely that we will (need an annual booster) and that’s driven by two factors: one is the extent to which immunity wanes after our initial vaccination,” University of Ottawa associate professor Raywat Deonandan told CTV’s Your Morning on Friday. “The second is how prevalent the new variants are going to be, and it looks like new variants will continue to be a threat at least for next few years, probably emerging every year or so.”

Canada expects to have every adult in the country fully vaccinated by the end of September. However, it’s not clear at this point how long antibodies stay in the system at an effective level. And, with many parts of the world not expected to be fully vaccinated until at least 2023, scientists worry that new variants able to defeat current vaccines could emerge.

“It looks like we’re going to keep on inoculating on a rolling basis until we get sufficient immunity in enough people to keep the disease at bay. That’s the goal here, to ensure we have population-level immunity,” said Deonandan.

Given the pace of the vaccine rollout, Deonandan said it may be that the first round of boosters takes the place of the second shot for people near the end of the vaccine queue who are receiving the two-shot Pfizer-BioNTech, Moderna or Oxford-AstraZeneca vaccines.

“It’s exactly the same thing, it’s just targeted to a different set of viruses, the more prevalent viruses. In fact it probably will be more efficacious,” he said.

If the first round of boosters does end up overlapping with the second round of initial vaccinations, Deonandan said he thinks it makes sense to ensure the entire population is fully vaccinated with two doses before distributing the first round of boosters to priority populations such as frontline workers or the elderly. However, he said those types of decisions will depend on further data on the effectiveness of first shots of vaccines.

The other issue that could throw the entire schedule up in the air is the nightmare scenario of emerging variants that are unaffected by existing vaccines.

“If the virus mutates in such a direction that the all the vaccines are no longer applicable to the circulating strains, we may have to inoculate everyone from scratch,” he said.