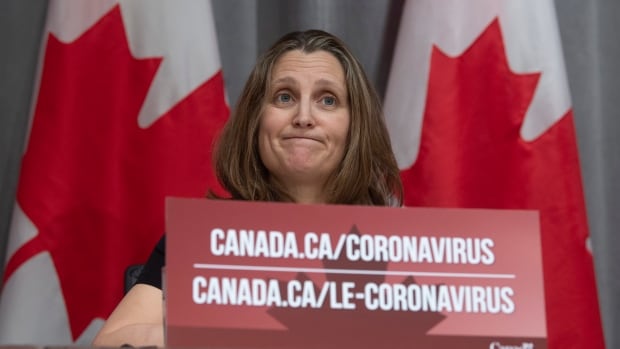 The federal government says it’s “strongly opposed” to the idea of sending American troops to the border to intercept illegal migrants as part of the United States’ response to the coronavirus pandemic.

“This is an entirely unnecessary step, which we would view as damaging to our relationship,” said Deputy Prime Minister Chrystia Freeland this morning, following the first public report from Global News that White House officials are thinking about stationing soldiers near the Canadian border.

“Canada is strongly opposed to this U.S. proposal and we’ve made that opposition very, very clear to our American counterparts.

She then paused and shrugged before continuing: “At the end of the day, every country takes it own decisions but ours is an important and valued partnership and we are making clear Canada’s position.”

Deputy Prime Minister Chrystia Freeland says the federal government is “strongly opposed” to the idea of sending American troops to the border to intercept illegal migrants in response to COVID-19 pandemic. She says the move would be unnecessary and could damage the Canada-U.S. relationship. 1:20

A source with knowledge of those discussions told CBC News the White House is looking at placing 1,000 troops about 25 kilometres from the 8,891 kilometre-long border and using remote sensors to look out for irregular border-crossers.

Another source — who spoke on the condition they not be named because they were not authorized to discuss the measures — said that if the plan moves ahead, the deployed U.S. Department of Defence personnel wouldn’t have any law enforcement powers.

They’d be tasked with watching for people crossing between ports of entry who could be carrying the virus that causes COVID-19 and reporting such people to U.S. Customs and Border Protection officials, they said.

“Protecting our border is a national security priority and without proper precautions, which can only happen through orderly, lawful entry at the borders, the virus could pose greater risk to migrants, travellers, law enforcement personnel, health care professionals and all Americans,” said the official.

“Top U.S. healthcare officials understand that, despite our respective guidance on social distancing and sheltering-in-place, the risk of further spread of the virus is too high not to respond in an appropriate and measured way.”

Canada found out a few days ago: Freeland

Freeland said it’s up to the Americans to explain their reasons for looking at putting troops on the border.

“What we have said is, ‘We really do not believe at all that there would be a public health justification for you to take this action. Of course, it’s up to you to decide for yourselves,'” she said.

“And we’ve said we really don’t think this is the right way to treat a trusted friend and military ally.”

Kirsten Hillman, who was officially named Canada’s ambassador to the United States today, said the Canadians have been working on the file for a few days now.

“Initially, yes, it was something that we we were surprised by. But as I say, we’ve been talking about it now with the Americans for a couple of days,” she told CBC’s Power & Politics.

“We’re opposed to it because of the message that it sends, and the message it sends is that there is something that needs to be fixed. And as I say, there isn’t. “

Hillman, who has been serving as acting ambassador since David MacNaughton stepped down last summer, described the conversations as ongoing and active.

WATCH: Trudeau on Trump considering sending troops to the border

Prime Minister Justin Trudeau was asked by reporters about US President Donald Trump is considering plan to send troops close to the border. 1:03

In his daily news conference this morning, Prime Minister Justin Trudeau said the unprotected border has benefited both countries for decades.

“Canada and the U.S. have the longest unmilitarized border in the world. It is very much in both of our of interests for it to remain that way,” he said.

“It’s benefited our two countries, our two economies, tremendously. We feel that it needs to remain that way.”

Former U.S. ambassador to Canada Bruce Heyman, who served under Barack Obama, said he believes Trump is just preying on domestic fears about the spread of the virus.

“Doing this is purely political. Except it has long-term ramifications for the relationship,” he said. “It’s nefarious, it’s very high-risk and it’s very unfortunate that we even have to discuss this today. This should never take place.”

Heyman said he doesn’t believe there’s a threat associated with people trying to sneak out of Canada into the U.S.

“Everybody kind of expects radical, crazy things coming out of the White House — but this, this is beyond anything I could have ever imagined or expected from Donald Trump,” he said.

But Former United States diplomat Sarah Goldfeder, now a principal at Earnscliffe Strategy Group, sees the move as a response to capacity, not politics.

“I think they’re more worried about the depletion of their current workforce due to COVID-19 and isolation measures. We have to remember that a lot of the hot spots in the United States are along the northern border.”

According to U.S. Customs and Border Protection figures, their officers apprehended more than 4,400 migrants at the Canada-U.S. border between Oct. 1, 2018 to Sept. 30 of 2019. About half of those border crossers were of Mexican nationality, while 322 were Canadian citizens.

The two countries have a mutual ban in place on non-essential travel across the border, which includes trips for recreational purposes.

When that ban was announced, both sides stressed the importance of continuing to allow trade, commerce and cross-border essential workers to move back and forth over the border. As part of the temporary agreement, Canada has also agreed to return asylum-seekers attempting to enter the country outside of official border points.