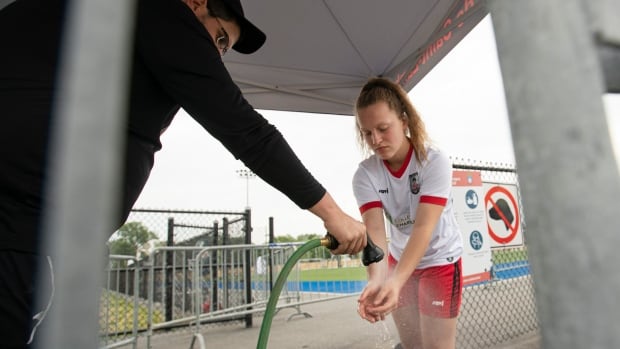 The COVID-19 situation in Quebec remains under control, but there is concern that some in the population are growing too relaxed, the province’s public health director said Friday.

Dr. Horacio Arruda said that with summer weather and a decline in new cases, “we have the impression that there’s a certain loosening in the population about distancing and wearing masks.”

In some recently confirmed new cases, the number of people with whom the infected person had been in close contact has been higher than in the past, Arruda said, suggesting a decline in vigilance. And new cases, though still much lower than at their peak, are skewing younger.

“These are situations that do concern us,” he said.

Arruda said great effort is going into preparing for a second wave. Among changes being made is a testing strategy to target asymptomatic carriers, he said, with a focus on more vulnerable sectors. Workers in Quebec’s long-term care homes will be tested every week, for example, he said.

Social housing group Front d’action populaire en réaménagement urbain (FRAPRU) says it is alarmed by the shortage of rental housing this year, warning that if the Quebec government does not put in place adequate measures, more people will be at risk of becoming homeless.

In its annual report published one day after moving day, the group said more than 370 families across the province were left without a new lease. The group says it is continuing to help those families find lodging.

The situation is worsened by the pandemic, the group says.

According to FRAPRU, with evictions allowed to resume this month, more tenants could be left out on the streets.

Four of the eight shuttered regional airport stations, and eight of the 30 cancelled routes, are in Quebec. Two other scrapped routes link Quebec to maritime provinces.

Without the flights, people in several parts of the province — including the Lower St. Lawrence, the North Shore, Gaspé and Abitibi-Témiscamingue — are effectively cut off from major city centres.

Air Canada blames COVID-19’s impact on travel for the cuts, stating the demand for both business and leisure travel has plummeted.