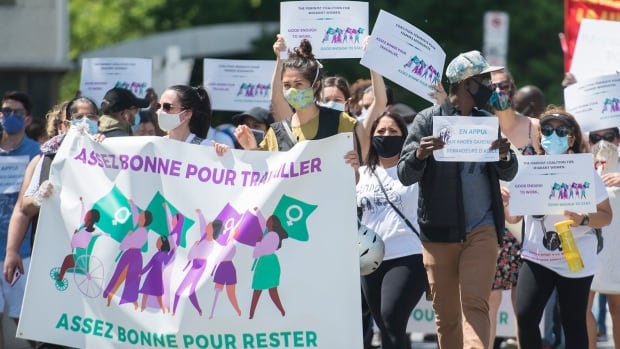 As Quebec’s coronavirus numbers continue to decline gradually, the province is reopening team sports and audiovisual production on Monday. Both sectors will have to respect the province’s physical distancing rules.

Quebec’s COVID-19 data on Sunday included the lowest number of new cases, 225, since March 22. It was the seventh consecutive day with fewer than 300 cases reported.

On Saturday, the number of people in hospital dropped to 981, the first time it has fallen below 1,000 since April 19 — though it is worth noting that on May 19 Quebec stopped counting patients who were well enough to be released but still waiting to be transferred to safe institutional care.

The numbers are in line with a gradual decline in most indicators that has persisted for around a month, during which time daily testing numbers for Quebec have largely stayed above 10,000 — much higher than in the first two months of the pandemic.

Protest to give status to asylum-seekers working in CHSLDs

About 1,000 people marched through the federal riding held by Prime Minister Justin Trudeau demanding commitment from federal and provincial governments to grant permanent resident status to those working on the front lines in the fight against COVID-19.

The Quebec government has the goal of hiring 10,000 new patient attendants by this fall for the care homes, known by their French acronym CHSLDs, with a new 12-week program. But the program, which promises a $49,000 annual salary, is only open to citizens.

Eight business owners have signed Le manifeste gaspésien pour la santé globale, a manifesto and plea to Gaspesians to put out the welcome mat for tourists this summer, despite fears about COVID-19.

Gaspé businesses have been gearing up for the possibility of a tourist season since the Quebec government ordered roadblocks restricting access to Eastern Quebec to be lifted May 18.

The police checkpoints were aimed at limiting the spread of COVID-19, by allowing only essential travel from other regions.

The roadblocks were lifted on schedule, despite concerns voiced by the regional director of public health, Dr. Yv Bonnier-Viger, about an influx of visitors who may bring the virus with them.