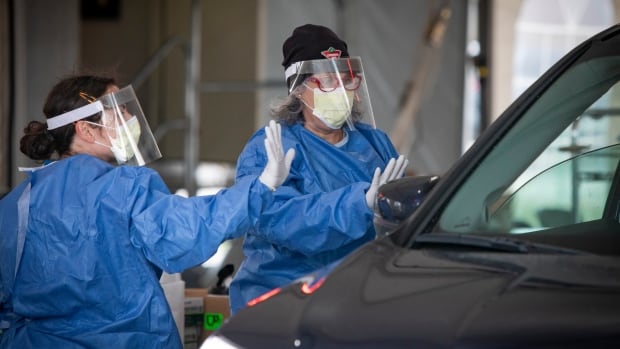 Toronto and Peel Region will be allowed to move into the next phase of Ontario’s reopening plan on Wednesday, Premier Doug Ford said Monday.

The two public health units, along with Windsor-Essex, were previously prevented from proceeding ahead as they dealt with comparatively more new daily cases than the 31 other health units around Ontario.

The move will allow residents in Toronto and Peel to dine out on patios, get a haircut and shop in indoor malls, among other changes.

“We are confident that Toronto and Peel have met the public health criteria to join the 31 regions in Stage 2 effective this Wednesday,” said Health Minister Christine Elliott on Monday.

The news comes as Ontario continues to see new daily case counts below 200, a steady decline in hospitalizations and consistent testing levels above 20,000 per day.

Toronto, Peel and Windsor-Essex still accounted for about 70 of the 161 new cases reported provincewide on Monday, but the overall numbers of active cases in both Toronto and Peel have been in decline in recent weeks.

Speaking at his daily COVID-19 briefing, Ford said the novel coronavirus remains too much of a threat in Windsor-Essex to allow the region to reopen further this week.

“No one wants to see every region of Ontario open more than I do, but we have to do it right,” he said.

Ford placed blame squarely on farmers and workers in the region who aren’t getting tested, saying the province will send in whatever resources are needed.

“It’s frustrating to say the least,” he said.

“It’s just not fair what you’re doing right now, as simple as that. Co-operate. We’ll bend over backwards to help you.”

Eighteen public health units reported no new cases at all, according to the Ministry of Health.

Slightly more than 86 per cent of Ontario’s 33,637 total cases are now marked as resolved.

There are 2,095 active cases in the province, a decrease of 56 from the last update and down considerably from the 5,600 or so that were active at the peak of the outbreak.

Further, Ontario’s network of about 30 community, commercial and hospital labs processed 21,900 test samples yesterday, while another 10,027 were added the queue.

The number of patients in hospitals with confirmed infections of the virus continued its steady decline, falling to 265 — the fewest since the Ministry of Health began reporting hospitalization figures in early April.

The number of those being treated in intensive care units and with ventilators also both declined, by 10 and 1, respectively.

Ontario’s official COVID-19 death toll grew by three, bringing it to 2,609. A CBC News count based on data from public health units put the real current total at 2,647. About three quarters of all deaths in the province were residents in long-term care homes.

Meanwhile, a third migrant worker in Ontario with COVID-19 has died.

The Haldimand-Norfolk Health Unit says the farm in its region currently has 199 infected migrant workers and 18 other people associated with the farm who tested positive for COVID-19.

Kristal Chopp, chair of the board of health, says it’s an “absolute tragedy” that someone who comes to Canada to work in the agricultural industry and support his family back home lost his life so far from his loved ones.

Two other migrant workers have died due to COVID-19 in the Windsor region since the start of the pandemic.

Approximately 20,000 migrant workers come to Ontario each year to work on farms and in greenhouses — many of them from Mexico, Guatemala and the Caribbean — and this year they were required to self-isolate for 14 days upon arrival.