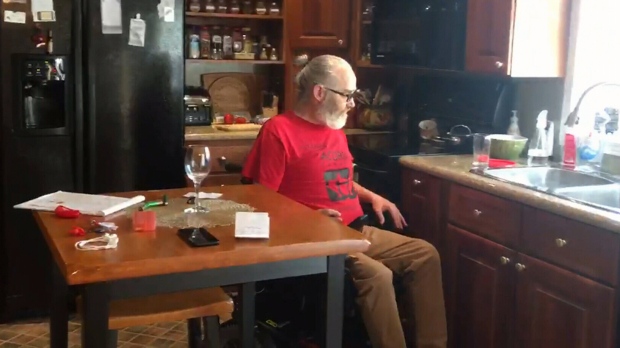 TORONTO — Before COVID-19 placed much of the country on lockdown, Blaine Cameron lived an independent and active life in Ottawa. But when the pandemic hit, he lost both.

Cameron, who has muscular dystrophy, lost his dedicated attendants who helped with daily tasks, and moved back in with his parents. Still, he considers himself lucky.

“It is quite a loss of independence but I’m glad that I have the privilege of having family that have the ability to help me out,” said Cameron.

“I can’t imagine other disabled people without that.”

There are more than six million Canadians living with a disability, and many of them, like Cameron, are especially vulnerable to the impact of COVID-19.

The Canadian government and international groups like the World Health Organization and the United Nations note that while having a disability alone does not put a person at higher risk of getting the disease, it can put some at a higher risk of infection or severe illness.

Those who must interact with multiple care providers, have difficulty washing their own hands, are blind and must touch objects and surfaces for support or to obtain information, for example, could all be a greater risk. They may also face other barriers such as disruptions to health care access and other essential services.

People who are non-verbal, living in poverty, or do not have access to technology and other communication support are also especially vulnerable, say advocates who have previously sounded the alarm.

New data out of the U.K. suggests that nearly two-thirds of COVID-19 deaths in the country have been people with a disability, the BBC reported, and advocates are calling for an inquiry. Meanwhile, U.S. figures from June out of New York and Pennsylvania found that COVID-19 infections and deaths were higher among those with intellectual disabilities, according to an NPR analysis.

Earlier in the pandemic, a woman in her 40s from British Columbia who had cerebral palsy died alone in the hospital after support workers who normally assisted her were barred from the facility due to COVID-19 prevention policies.

These challenges are compounded by the isolation and loneliness that many people are already experiencing as a result of the lockdowns.

“I really have to draw on just trying to calm my mind and focus on other things, and try not to let that anxiety overwhelm me,” Cameron said.

There was a proposal in Ottawa for a one-time payment of up to $600 for those with a disability that is trapped in political limbo after the bill failed to pass before the House of Commons adjourned. The Prime Minister’s Office says it is exploring non-legislative ways to get that money to those who need it.

“It’s disappointing to see the parties not cooperating the way they had been at the beginning, when the Liberal government was able to get a lot of support measures through,” said Ray Noyes, who, along with Cameron, are a part of ACORN Canada, an advocacy organization made up of low-and moderate-income families.

Noyes is among the 1.25 million Canadians who could have benefited from the financial aid had it passed. He and other advocates question why people with disabilities are living on less than Canadians who are receiving financial help through the Canadian Emergency Response Benefit (CERB), which disqualifies many of those who are on provincial assistance programs.

Noyes currently lives on $1,200 a month from the Ontario disability support program, but rising costs due to the pandemic means those dollars are not going as far as they used to.

“If you think it’s tough for you to try and get your supplies, to get your food, to get the things you need to feel well, imagine what it’s like for somebody who’s already got all kinds of barriers,” said Bonnie Brayton, the national executive director of DAWN Canada, known as the DisAbled Women’s Network Canada.