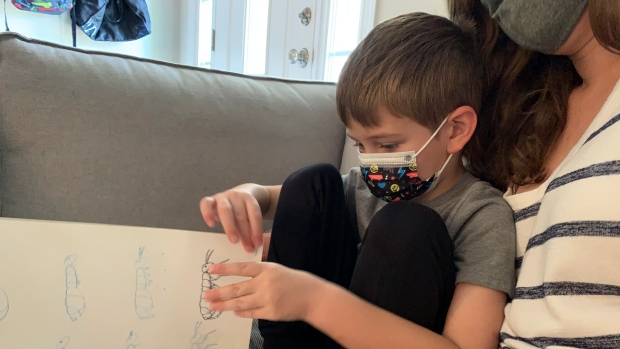 TORONTO — Fully vaccinated individuals who experience breakthrough infections of the highly transmissible and globally dominant Delta variant can still spread the virus to vaccinated household members, though at lower rates than those who are unvaccinated, a new British study suggests.

The latest findings published in The Lancet Infectious Diseases this week show that while COVID-19 vaccines do lower risks of infection, there is still a 25 per cent chance, or one in four risk, of catching the Delta variant from a vaccinated person living in the same household. The risk of transmission to an unvaccinated household member is close to 40 per cent.

Experts told CTVNews.ca that as vaccination rates increase, so will the number of breakthrough cases, simply because there are fewer unvaccinated people. In addition, many breakthrough cases are asymptomatic and would otherwise go unnoticed. But the rate of hospitalizations and deaths remain considerably higher among unvaccinated people than those who have had both shots.

Previous studies have already established that vaccines help prevent serious illness and death, but research suggests they may be less effective against the Delta variant.

One major U.K. study published in August that looked at the effectiveness of the Pfizer-BioNTech and AstraZeneca shots, the vaccines included in The Lancet study, showed that they remained effective against the Delta variant at 88 per cent with Pfizer (down from almost 94 per cent with the Alpha variant) and 67 per cent (down from 74.5 per cent) with the AstraZeneca version. Studies have also shown that while their effectiveness against Delta-driven hospitalizations also fell, they remained high overall.

The Lacet study, led by Imperial College London and the U.K. Health Security Agency, also showed that while fully vaccinated individuals recovered from infection more quickly than those who did not get any shots, the amount of the SARS-CoV-2 virus found in both groups were similar at their peaks. This could explain why vaccinated individuals can still transmit the virus in close quarters, researchers said.

“Vaccines are critical to controlling the pandemic … However, our findings show that vaccination alone is not enough to prevent people from being infected with the delta variant and spreading it in household settings,” said co-author Ajit Lalvani, a professor with Imperial College London, in a statement.

“The ongoing transmission we are seeing between vaccinated people makes it essential for unvaccinated people to get vaccinated to protect themselves from acquiring infection and severe COVID-19, especially as more people will be spending time inside in close proximity during the winter months.”

Household transmission is known as a dominant source of infection spread, but the Lancet study is among the few so far that sheds light on the Delta variant and how vaccinated individuals who are asymptomatic or only mildly sick can still contract the virus and pass it on.

The study recruited 621 individuals between September 2020 and September 2021 for two studies, one on the Alpha variant and pre-Alpha cases, and one on the Delta. Participants were swabbed daily for up to 20 days, providing a total of 8,145 upper respiratory tract samples.

Ultimately, 31 out of the 126 fully vaccinated household contacts, or 25 per cent, were infected with the Delta variant, while 15 out of the 40 unvaccinated contacts, or 38 per cent, became infected. The median length time since vaccination for those who were infected was 101 days. For uninfected contacts, it was 64 days, which suggests waning protection and increased risk of infection after about three months, researchers said, findings that bolster evidence that booster shots will be necessary.

“This finding is consistent with the known protective effect of COVID-19 vaccination against infection. Notwithstanding, these findings indicate continued risk of infection in household contacts despite vaccination,” the authors wrote in the paper, noting that their findings of the secondary attack rate was higher than studies conducted before the Delta variant emerged.

“Our findings provide important insights into the effect of vaccination in the face of new variants, and specifically, why the delta variant is continuing to cause high COVID-19 case numbers around the world, even in countries with high vaccination rates,” lead author Dr. Anika Singanayagam with Imperial College London said in a statement.