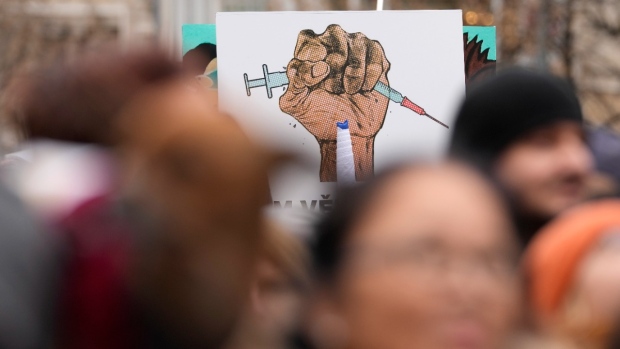 PRAGUE — The Czech Republic’s government has agreed to end mandatory coronavirus testing at schools and companies this month, the prime minister said Wednesday.

The testing “undoubtedly” helped slow down the spread of infections and prevented the health system from being overwhelmed, Prime Minister Petr Fiala said.

“Given the development, we’ve decided to end the compulsory testing on Feb. 18,” Fiala said.

With 57,195 new cases recorded on Tuesday, the country registered a new day-to-day record, about 2,500 more than the previous record set last week on Wednesday.

The seven-day infection rate grew to 2,483 per 100,000 residents on Tuesday, up from 2,318 the previous day, as part of a surge in cases caused by the Omicron variant.

Omicron is less likely to cause severe illness than the previous Delta variant, according to studies. Omicron spreads even more easily than other coronavirus strains, and has already become dominant in many countries. It also more easily infects those who have been vaccinated or had previously been infected by prior versions of the virus.

The number of COVID-19 patients needing hospitalization has only been slightly increasing in recent days, reaching 2,653 on Tuesday, still far less that more than 7,000 in early December. Around 200 people have been in intensive care units, a stable number for the last two weeks.

The Czech Republic has registered 37,281 virus-related deaths during the pandemic.

The nation of 10.5 million has 6.8 million people fully vaccinated and 3.8 million who have received a booster shot.