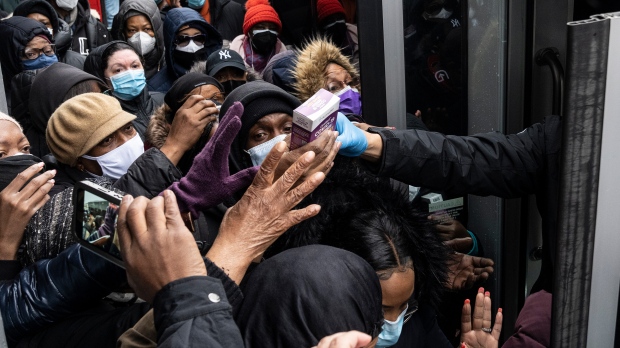 As the highly contagious Omicron coronavirus variant continues to spread across the U.S. this holiday season, the rate of daily COVID-19 cases detected has eclipsed those fueled by the Delta variant over the summer.

COVID-19 hospitalizations remain relatively lower than peaks earlier this year, yet the situation may worsen as tens of millions of Americans remain unvaccinated, putting them at higher risk for complications and death.

Health and government officials have been warning that the Omicron variant threatens to overwhelm hospitals and health care workers.

“Although hospitalizations may be less, that doesn’t mean zero. There are many places in the country where hospitalizations now are increasing,” Dr. William Schaffner, a professor at Vanderbilt University Medical Center, told CNN’s Poppy Harlow on Friday.

More than 69,000 Americans were hospitalized with COVID-19 on Christmas Eve, according to data from the U.S. Department of Health and Human Services.

An increase of around two per cent from last week, the figure remains below peak hospitalizations during the Delta surge and is half of the record-high from January.

But experts note that hospitalization figures tend to lag with time as some illnesses worsen, and researchers are still working to determine whether Omicron is less likely to cause severe illness.

Twelve states have seen at least a 10 per cent uptick in COVID-19 hospitalizations over the past week compared to the previous, HHS data shows.

That’s happening against the backdrop of a 48 per cent increase in Covid-19 cases from last week, bringing the U.S. average for new daily cases to 182,682, according to Johns Hopkins University.

Case numbers surpassing the summer surge is a sobering indication of Omicron’s spread, as it quickly became the most prevalent variant in the US this week.

And as COVID-19 testing shortages led to long lines in many metro areas before Christmas, some pockets of the country are reporting surges.

COVID-19 cases in Los Angeles County have nearly tripled in the last week, reaching 9,998 new cases for its about 10 million residents, public health data shows. Hospitalizations, however, have remained steady.

New York state broke its own daily record of COVID-19 cases on Friday, when it reported 44,431 new cases — a 14 per cent increase from Thursday.

“This is not a surprise,” New York Gov. Kathy Hochul said. “This is a very, very contagious variant.”

Hospitalizations in the state are also rising — but at a lower rate. Friday data showed that 4,744 New Yorkers were receiving COVID-19 treatment at hospitals, marking an uptick of 4.6 per cent from Thursday.

The spread of the Omicron variant can also be partially blamed for thousands of flight cancellations across the globe during the Christmas holiday when millions of Americans travel to gather with family and friends.

As of 11 a.m. ET on Christmas Day, Delta Air Lines canceled nearly 300 flights Saturday, and United Airlines saw about 240 cancellations, according to the tracking website FlightAware.

And while weather may have been a culprit prompting the cancellations, Delta and United have acknowledged they have struggled with staffing due to the Omicron variant.

“Upwards of 150 cancels per day are expected both Saturday and Sunday,” Delta said in a statement Friday.

JetBlue Airways on Christmas Day morning also canceled 120 flights, accounting for 12  per cent of their scheduled trips, according to FlightAware.

The U.S. Centers for Disease Control and Prevention announced Thursday a shortening of the isolation period for health care workers who test positive for COVID-19. As long as they are asymptomatic and later test negative, the timeframe away can decrease from ten days to seven.

“That isolation time can be cut further if there are staffing shortages,” the CDC said in a statement, pointing to surging COVID-19 cases due to Omicron.

The agency also recommended that health care workers do not need to quarantine “following high-risk exposures” to the virus if they are vaccinated and boosted.

Meanwhile, New York state on Friday launched a more expansive isolation policy, which allows fully vaccinated essential workers who test positive for COVID-19 to return to work after five days if they present no symptoms and have had no fever for 72 hours, the governor said.

Hochul didn’t explicitly define who is considered an essential worker, but she explained that it includes those who work in healthcare, sanitation, grocery stores, pharmacies and restaurants.

“I think it’s really important for us to do this, because at this point we’re facing a potential collapse of our essential infrastructure,” Wen said. “This is the reason why for health care workers it’s so important that we preserve the ability of our hospitals to function — but also transit and grocery stores coming into this holiday season. And so many other essential workplaces may actually have a critical shortage of workers.”

As hospitals and health officials prepare for Omicron, additional research is being performed analyzing earlier stages of the pandemic.

During the Delta surge that began over the summer, there were about 690,000 preventable COVID-19 hospitalizations in the United States that cost nearly US$14 billion dollars, according to new estimates from the Kaiser Family Foundation.

About 1.2 million hospital admissions were recorded between June and November 2021, according to data from the US Department of Health and Human Services.

For their analysis, KFF used data from the CDC to estimate that 85 per cent of those hospitalizations were among unvaccinated.

Hospitalizations for which COVID-19 was not the primary cause were excluded, as well as those that could not have been prevented by vaccines as they are not 100% effective.

Using various studies, KFF estimated the average hospitalization to cost about US$20,000 and preventable COVID-19 hospitalizations totaling US$13.8 billion dollars over the course of six months.

“The monetary cost of treating unvaccinated people for COVID-19 is borne not only by patients but also by society more broadly, including taxpayer-funded public programs and private insurance premiums paid by workers, businesses, and individual purchasers,” the analysts wrote.

“Though there was of course a societal cost to develop and distribute vaccinations, the vaccines save the U.S. health system money in the longer run by preventing costly hospitalizations.”