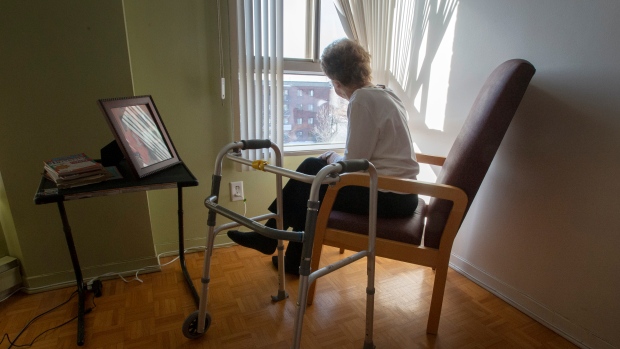 TORONTO — As Canada prepares for a possible second wave of COVID-19, some health experts are raising concerns that long-term care homes devastated by the virus earlier this year are not prepared for a surge of infections.

Palliative care physician Dr. Amit Arya told CTV’s Your Morning on Monday he is “very worried” about how care homes will handle outbreaks the second time around.

“If we reflect back on the early months of the pandemic… a lot of our focus was on preventing a situation like Bergamo, Italy, or New York where hospitals, acute care, ventilators would be overwhelmed,” Arya said.

“While we largely achieved success in that regard, we’ve failed miserably to protect our seniors in long-term care.”

Arya, who works on the frontline in various Ontario nursing homes, says he is concerned that a second wave may have already begun in some residences.

In Ontario, at least 20 long-term care homes have already reported COVID-19 outbreaks. West End Villa in Ottawa is the hardest hit, with nine deaths as of Friday and 52 residents and 26 staff members testing positive.

In the spring, as the virus spread from one long-term care home to the next, an estimated 82 per cent of deaths in Canada were among residents of long-term care homes, according to a report from the Canadian Institute for Health Information.

People older than 80 accounted for 71 per cent of Canada’s COVID-19 deaths, followed by those aged 70 to 79 (18 per cent) and 60 to 69 (seven per cent). Together, those three groups account for more than two-thirds of all COVID-19 hospitalizations.

Arya explained that the majority of problems that are in long-term care are related to staffing and work conditions.

In response to outbreaks at the start of the pandemic, recruitment campaigns have been established in Quebec and B.C. to hire more support workers.

The Quebec government previously said 8,000 newly hired personal support workers will be working by mid-September, while the government is also barring orderlies from working in multiple homes.

The B.C. government announced last week that it will train up to 7,000 people to work as health care aides in long-term care homes and government will pay the tuition costs.

Despite the effort, Arya warned that many facilities continue to struggle with ongoing staffing shortages.

“British Columbia has about half of the long-term care residents as compared to Ontario but only had one-tenth of the deaths,” Arya said. “We have yet to see a similar response in Ontario.”

While Ontario has announced plans to address the salaries of personal support workers and improve their working conditions, the new measures have yet to be implemented in facilities.

However, Arya says these plans may not be enough to help long-term care homes.

“Even before the pandemic we had one nurse looking after, you know, 32 residents in the day and over 60 at night and that’s not feasible, and obviously, as we can imagine, those staffing ratios are even worse since the pandemic started,” he said.

Arya explained that making sure all long-term care workers receive a living wage, paid sick leave and pandemic pay is key, but additional measures need to be taken in Canada’s facilities.

“I would make sure that we had hospital-based teams ready on standby at the start of an outbreak to go into these homes, make sure proper care is being provided. I would ensure that the homes are transparent about their staffing levels and the type of care that’s going on inside, not just the government, but also to the public,” Arya said.

If he were in charge of long-term care facilities, Arya said he would do “a lot of things differently” including ensuring that family caregivers are not barred from entering the facilities amid outbreaks. He also says he would not hesitate to remove the licenses of operators that cannot comply with these measures.

“I would try to advocate for the health and safety of the residents and their family members above all else,” Arya said.