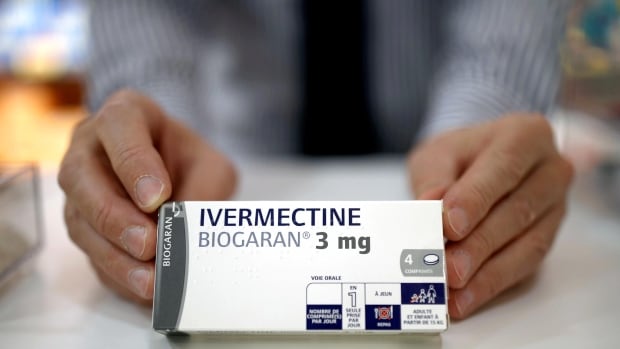 A doctor who was filling in at a rural Alberta hospital says he treated three COVID-19 patients with ivermectin, triggering a warning from the provincial health authority about the dangers of the controversial drug.

In a video circulating on social media, Vancouver-based Dr. Daniel Nagase says he administered ivermectin in September to patients at the hospital in Rimbey, Alta.

Ivermectin is used primarily to rid livestock of parasites. It has not been approved for use in either Canada or the United States for the treatment of coronaviruses and no clinical studies have proven whether it can slow or stop the spread of the coronavirus responsible for COVID-19 in humans.

Alberta Health Services (AHS) has received complaints about Nagase, who has worked as a fill-in doctor at the Rimbey Hospital and Care Centre, 65 kilometres northwest of Red Deer. AHS says he is spreading misinformation.

“Neither the veterinary nor human drug versions of ivermectin has been deemed safe or effective for use in treating or preventing COVID-19,” reads an AHS statement issued earlier this week.

“It is extremely disappointing that someone would spread misinformation about COVID-19 treatment in this way, and suggest that AHS is withholding treatment for patients.”

CBC News repeatedly called Nagase’s office but was told he would not be accepting interviews from CBC about his use of ivermectin or the claims made in the video.

AHS said Nagase is “not scheduled to work as a locum [fill-in] in AHS” and added that because of the complaints, a review will be done.

In the video, posted Monday, Nagase is shown delivering a speech on Oct. 1 at a Vancouver event marking the 75th anniversary of the Nuremberg trials.

In the video, Nagase said the three COVID-19 patients in Rimbey had “deteriorated overnight” and were being treated with oxygen and steroids.

Nagase said he asked for ivermectin to be provided by the Red Deer Hospital’s central pharmacy but was denied and warned the drug should not be used on COVID-19 patients.

Nagase said he sought the help of a “town pharmacist” who acquired ivermectin for him.

“He couldn’t get it from his usual chemical supply because it was a Saturday. He had to get it from an agricultural supply,” Nagase says in the video. “He went to the Co-op store.”

In the video, Nagase claims the drug worked quickly on the patients, allowing all three to leave the hospital within a week. Two of the patients, he claims, were “almost completely better” within 18 hours.

Nagase says that within hours of administering the ivermectin, an AHS medical director barred his patients from receiving the drug or any of the other medications he had prescribed them.

He said he was removed from the hospital, and “relieved” of his medical duties the following day.

He claims there is “something malicious” about the care being provided to COVID-19 patients in Alberta hospitals.

Wolstenholme said the misuse of ivermectin in humans can cause myriad dangerous symptoms.

Physicians are sworn to use evidence-based medicine, he said.

Wolstenholme said doctors who spread misinformation put the public at risk by undermining the confidence in trusted medical science.

“We have what was assumed to be a trusted health-care professional really providing bad advice.”

The B.C. College of Physicians and Surgeons lists Nagase, who graduated from Dalhousie University in 2004, as actively practising as a family physician in Vancouver.

In a statement to CBC News, the Alberta College of Physicians and Surgeons said it is aware of Nagase’s claims but cannot disclose information related to matters that may be under investigation.

Ivermectin has been used in veterinary medicine for more than 30 years. The form used on humans is on the World Health Organization’s list of essential medicines because it is safe, inexpensive and effective — and has proven to be life-saving for treating some illnesses caused by parasites.

COVID-19 is caused by a virus, not parasites.

The drug has been widely and wrongly promoted as a cure for COVID-19, leading to shortages in Canada for those who may need it. Quantities of the drug have been limited since January.

A thread on some <a href=”https://twitter.com/hashtag/Ivermectin?src=hash&amp;ref_src=twsrc%5Etfw”>#Ivermectin</a> poison centre calls: <br><br>1. Took ivermectin horse paste. Not vaccinated. Pt. is sure they have covid (but not tested). Feels weird in head, tightness in ears.<br><br>2. Went to use hand sanitizer but instead used ivermectin lotion in an alcohol base. <br><br>1/5

Health Canada recently issued an advisory asking people not to take the drug to treat COVID-19 after reports that some people were taking its veterinary form.

Alberta’s poison hotline, the AHS Poison and Drug Information Service (PADIS), has reported a recent spike in the number of calls from people who got sick after taking ivermectin.

PADIS medical director Dr. Mark Yarema was part of the AHS scientific advisory group that looked at ivermectin. The group issued a document emphasizing that the drug is not approved for the treatment or prevention of COVID-19.

“We’ve had at least nine months now of evidence … and we just haven’t seen any good, conclusive data that suggests that it is the thing that is making people better from COVID,” Yarema said.

“It would be very similar to treating a stomach flu or a gastroenteritis,” he said.