TORONTO — Doctors are calling for tighter control of the sale of nitrous oxide after a woman was taken to a B.C. hospital in a psychotic state after inhaling the gas used in whipped cream dispensers.

The slim, 20-year-old woman had no history of mental illness but reported to medics that she had been inhaling nitrous oxide, or laughing gas, on a daily basis, according to the BC Medical Journal.

A psychiatrist, neurologist and addictions specialist at Richmond Hospital, part of the Vancouver Coastal Health authority, assessed the patient and agreed that her psychosis was the result of nitrous oxide (N2O) misuse.

Recreational users of N20 commonly puncture the pressurized cartridges, release the gas into an inflatable such as a balloon and inhale it, which can cut off oxygen to the brain causing death.

Online videos show some users inhale the gas straight from the vials.

“She needed to be admitted to hospital under psychiatric and neurological care and she was giving us the information later that she was using whippits (whipped cream cartridges) as a drug of choice and she was actually using about 100 vials of this a day,” said Dr. Matthew Kwok, an emergency physician at Richmond Hospital and lead author on the report.

“We want to highlight the issue of access and regulation. To have nitrous oxide, an anesthetic and also a drug that is easily abused, to be so accessible to the public we think is dangerous.

“And we think that regulatory bodies should really look into ways to control purchase of this drug in Canada.”

There are currently no restrictions around the purchase of whippits and the study authors believe that “current reporting does not reflect the magnitude of the toxicity problem.”

Kwok added that there is the potential for brain damage from even short-term misuse. 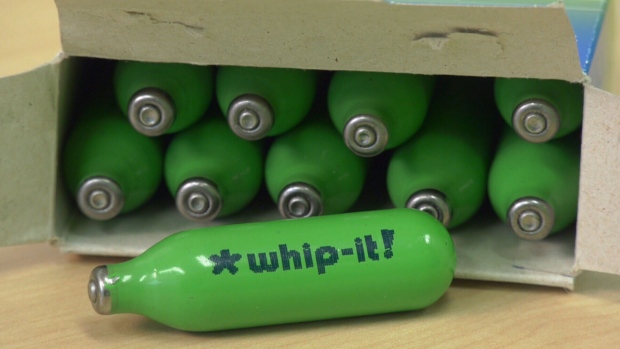 In response to the BCMJ report, Health Canada said the government “would document the misuse (of whippits) but only take further action if the N2O canister had faults or hazards regarding its intended use.”

“To our surprise no cases of N2O misuse have been reported to Health Canada Consumer Products and Cosmetics and only one case of substance abuse of N2O had been reported to the Canada Vigilance Program,” the study author’s wrote.

“We also contacted the BC Drug and Poison Information Centre and learned that the provincial toxicology call centre received 14 calls regarding N2O toxicity from misuse of Whippits or similar commercial products between 2015 and 2019.

“Since our investigation determined that Health Canada received only one report of N2O misuse in this period, many incidents appear to have gone unreported.”

Health Canada considers nitrous oxide to be an “unscheduled non-prescription professional use” product.

“This raises an important question: if N2O used medicinally is deemed to require health care provider involvement, why is the purchase of N2O used commercially not restricted in any way given the potential impact on consumers?” the report authors asked.

A pack of 100 whippit canisters can be purchased for less than $100, according to the study. Each one averages eight grams of pure N2O.

Meanwhile in Denmark, the government there is pushing to ban the sale of laughing gas to those under 18 and proposes restricting sales to two eight gram cartridges per purchase.

“I have seen people pass out, drop right down, even go into a seizure for a short period of time and then come back laughing and think that was funny,” said Damien Delaney, a Toronto-based addictions specialist.

“Potentially it can lead to death.”

Delaney added that N2O has been a problem “for a number of years” and agreed that it should be controlled.

“The longer you end up using it the more the oxygen is not going towards your brain which can cause the dizziness, which can cause the vomiting and in the long term the heart attacks,” said Orit Tordjman, clinical director of Addiction Rehab Toronto.

“But it ends up being very, very addictive, because it gives you that instant high and that instant gratification people are looking for.”

Tordjman said raising awareness of the issue, “whether it be ads on social media or ads on TV,” is very important “because the younger population needs that… they need to know the long term effects of using nitrous oxide. It is hard to make it illegal because it is so readily accessible.”