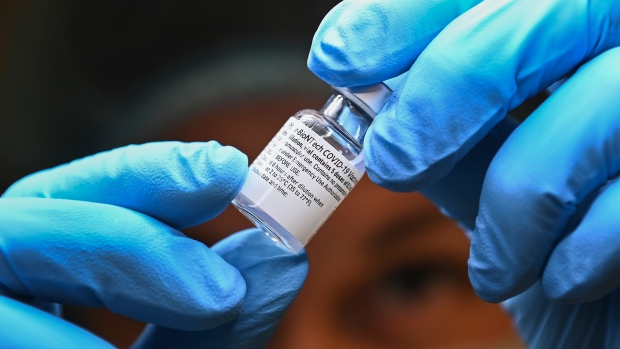 TORONTO — Next week, the U.S. Centers for Disease Control and Prevention (CDC) is holding a meeting, which scientists around the world will be watching, to discuss rare reports of heart inflammation occurring in people after receiving mRNA vaccines for COVID-19.

Myocarditis is a condition that causes inflammation of the heart muscle. It typically develops from a viral infection, and it can cause symptoms like fatigue, fever and chest pain.

Doctors are now investigating rare cases that have emerged after mRNA vaccination, usually after a second dose.

“People present with increasing shortness of breath or perception [that] they can’t breathe properly, and very much pain in the chest,” Dr. Martha Fulford, an infectious disease specialist in Hamilton, told CTV News. “It could be an ache, it could be sharp.”

She says she has seen two cases, and emphasized that these cases are rare, but still need to be investigated in order to make sure our vaccine rollout is as safe and informed as possible.

“I don’t think risk should be exaggerated, but we certainly shouldn’t minimize risks either,” she said.

A causal link between the vaccine and the inflammation has not yet been established, but those who have experienced myocarditis after being vaccinated are calling for a greater awareness among doctors and the public, so that patients can receive the best care.

Studies have suggested that younger patients may be more susceptible.

In a case study of seven patients who were hospitalized with myocarditis after vaccination, which was published Wednesday in the journal Circulation, all seven were male patients between the ages of 19 and 39, with hospital stays that ranged from one to three days.

While most reported cases so far have been mild, some have been more troubling.

Eighteen-year-old Isiah Harris got his second mRNA shot in April near his home in Springdale, Arkansas. He said he had no side-effects from his first shot of the vaccine.

The otherwise healthy teen, who plays football and lifts weights, says he started feeling ill within about 12 hours, developing a fever and severe chest pain.

“Within 48 hours, my heart started to just like felt like it was pumping out of my chest, it hurts so bad,” he told CTV News. “It was honestly the worst pain I’ve ever felt.”

Doctors diagnosed him with myocarditis. Harris told CTV News that doctors said only 40 per cent of his heart was pumping normally. He developed fluid in one lung, a frightening experience that left him in hospital for four days.

During Harris’ time in hospital, he was treated with anti-inflammatories and pain killers. He’s now seeing U.S specialists at the Cleveland Clinic who are researching a possible link with his vaccination.

“I’m getting an MRI tomorrow to see if there’s permanent damage on my heart, to see how long I need to be resting for,” Harris said.

The first reports of myocarditis in those who had recently been vaccinated started coming out of Israel in late April, when the country announced it was investigating a few cases.

In early June, Israel’s Health Ministry said they had observed a small number of heart inflammation cases among mostly young men who had received an mRNA vaccine, reporting that they had identified 275 cases of myocarditis between December 2020 and May 2021.

More than five million people were vaccinated during that time period, the ministry said, underlining how rare this appears to be.

Italy and the U.S. have also reported instance of heart inflammation such as myocarditis and pericarditis, which is swelling of the tissue surrounding the heart.

The CDC reported in late May that these incidents were mostly found in male teenagers and young adults 16 years and older, and that the second dose was more likely to trigger a reaction, which occurred “typically within several days after COVID-19 vaccination.”

“Most patients who received care responded well to medicine and rest and quickly felt better,” the CDC stated.

Myocarditis occurs in the general population without the COVID-19 vaccine, and has been occurring long before COVID-19 was around. But the CDC found that numbers of post-vaccination myocarditis were higher in those aged 16 to 24 than would be normally expected for those age groups.

In an update on COVID-19 vaccine safety released on June 10, the CDC and the U.S. Food and Drug Administration reported that there had been just under 800 reports of myocarditis or pericarditis as an adverse reaction after an mRNA vaccine through the Vaccine Adverse Event Reporting System. Of these reports, 75 per cent occurred in male patients, and more than 50 per cent of reports occurred in those aged 12 – 24 years.

Of 475 reports in those under 30 years of age, only 226 matched CDC’s case definition for myocarditis.

Of the 226 patients, 81 per cent have already fully recovered from their myocarditis or pericarditis.

Doctors in Canada are now seeing cases too. There have been 35 reported to Health Canada, as of June 4 — three among teens in Ontario.

The National Advisory Committee on Immunization updated their recommendations Thursday to announce that mRNA vaccines are preferred as the second dose to those who received AstraZeneca as their first shot.

“The emerging evidence [is] suggesting better immune responses when their first dose of the AstraZeneca vaccine is followed by a second dose of the Pfizer-BioNtech or Moderna mRNA vaccines,” Dr. Theresa Tam, Canada’s Chief Public Health Officer, said Thursday.

“We are aware of and are closely monitoring reports of rare cases of myocarditis and pericarditis heart inflammation, following vaccination with mRNA vaccines. NACI is closely following these reports.”

She added that “there is no clear association yet established between vaccination with an mRNA vaccine, and this condition.”

Canada recently surpassed Israel as the country with the most fully vaccinated population. Over 30 million doses have been delivered, and 65 per cent of the total population has been received at least one dose.

The numbers of those experiencing myocarditis are so low that it’s hard to pinpoint the exact risk right now.

“For me, the single most important question is knowing exactly what the true risk is so we can actually tell people [and] they can make an informed decision,” Fulford said.

The questions are particular pertinent to teens and young adults, who seem to be at a higher risk based on the current data.

Israel is discussing using a lowered single dose on younger vaccine recipients instead of the two-dose regime.

Although teenagers and young adults are much less likely to suffer severe cases of COVID-19 or die of the virus, it’s far from impossible: in Canada, more than 4,000 people under the age of 30 have been hospitalized with the virus, and 76 have died.

Rare cases of myocarditis after vaccination have also been occurring in older adults.

Shirley Graves, 69, is a former ER nurse, who now owns a sheep in Ashton, Ontario.

She received the Pfizer vaccine on March 8, and felt vaguely feverish that night and through to next Tuesday morning, something that is relatively common as a side-effect.

But then the chest pain started. After receiving pain on and off for around a day, she found herself heavily sweating as she walked to the barn on Thursday.

“I thought, ‘Better lie down, Shirley, because you’re going down,’” she said. “I don’t think I truly lost consciousness, but I was incontinent.”

She was taken to hospital, and was also diagnosed with myocarditis at the Ottawa Heart Institute.

As a former health care worker, she knew it was important to log it as an adverse reaction.

She said she believes it was related to the vaccine because no other explanation makes sense.

“I have no family history, I’m not overweight,” she said. “Living on a farm, we eat our own food. Most of it’s home grown. There was no indication [of] something prior to the vaccine, and I became symptomatic within 18 hours of having the vaccine.”

“I become diaphoretic and a little lightheaded, I feel quite washed out, after these episodes,” she said.

She was hesitant to speak about her experience publicly because she does not want to make anyone scared to get vaccinated — something she believes is still important.

“I didn’t want to be […] putting maybe vaccine hesitancy in anybody’s mind,” she said.

“My mom now, she’s 96 and a half, she’s had both her vaccines,” she added. “I actually got to hug her, first time in 14 months, you know, and those are things that are very important.”

Scientists still haven’t uncovered evidence that shows that the vaccines are a direct cause for these cases of myocarditis.

But Canadian doctors are urging a closer look.

Dr. Peter Liu, with the Ottawa Heart Institute, is part of a group looking at these cases, and is preparing to publish a study.

Liu said that vaccination remains the priority, particularly with dangerous variants on the rise.

“We should keep in mind that these are rare complications, you know from the mRNA vaccine,” he said. “They’re so effective, and particularly now with new variants around such as the Delta variant, having the vaccine on board is so protective for both the recipient, as well as, ultimately, for the community.”

He has personally worked with six patients who experienced myocarditis or pericarditis after receiving a vaccine.

“The outcomes of the majority of these cases are completely benign,” he said. “And so that’s additional reassurance that having the vaccine is still better than not being protected.”

Doctors are tracking Graves’ recovery. Two months later, she says her energy is back. She has returned to shearing sheep on her farm, and the scary incident has not changed her unwavering support for vaccination.

Her plan now is to get AstraZeneca for her second shot, which is available to those who can’t have mRNA vaccines.

“We have to get as many people vaccinated as possible, so we can return to some kind of normalcy and get our economy going again,” she said.

But she said her experience showed her there isn’t enough awareness among health workers about this issue.

“I don’t think the medical community had this on their radar as general knowledge,” she said.

Liu agrees that this needs to change.

“I do think that both patients as well as health providers should be aware of this complication, so that when it does arise, that is not ignored, and so that the patient could get to the proper monitoring, [and] the support. And then, if you know, things don’t settle down, the patient can get proper treatment.”