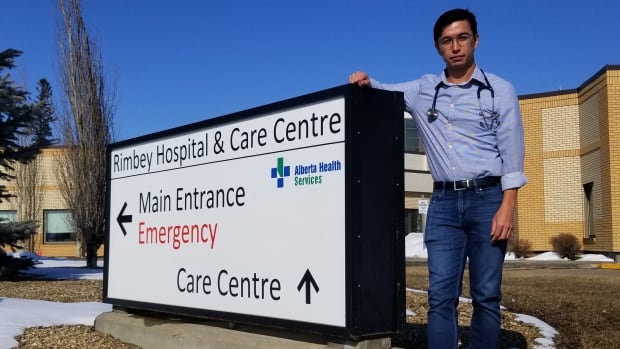 Some doctors in rural Alberta are threatening to leave the province when the COVID-19 pandemic is over, blaming the Alberta government for cuts to fees for hospital and clinic visits.

Dr. Cian Hackett, a rural generalist in the town of Rimbey in central Alberta, said he plans to leave when the crisis is over.

“The successive cuts to physician services delivered in small hospitals such as in Rimbey, Sundre and Stettler are absolutely devastating,” Hackett said in a Facebook post Sunday.

Hackett said he had thought he would work in Rimbey for 30 more years but has changed his mind.

“If you live in another province and know of a great rural practice opportunity, I would love to hear from you,” he wrote.

Hackett, one of six doctors in the town of 2,100 people, works at a clinic and the emergency room at the Rimbey Hospital and Care Centre.

In an interview with CBC News Monday, he said the last straw came last week when government cuts to after-hours hospital fees came into effect Apr. 1.

In a typical 24-hour shift in the emergency room, Hackett said, he would see 20 to 30 patients. He said he worked about six of those shifts every month.

Hackett noted that the government has overwhelming support among rural Albertans.

Medical liability insurance is required of all physicians, and provides malpractice insurance in case they get sued.

According to the 2020 fee schedule, Hackett said, coverage for a family physician to work in a clinic and an emergency room cost $3,420 a year. Adding  obstetrics coverage increased the annual fee to $8,172. In the past, doctors were reimbursed for all but $1,000 of those fees.

“The slash to that no longer makes it worth it for us to practice obstetrics,” he said. “I’d actually be close to losing money each year if I continue that part of my work.”

During the pandemic, the Alberta government deferred its move to change the amount doctors will get for longer visits with patients, known as a complex modifier.

But that change is expected to be implemented when the crisis is over.

“I am not concerned about taking a pay cut,” she wrote. “What concerns me is the focus that this government has taken in its approach to saving money.”

She said the comprehensive care model that Alberta has been building for more than a decade has been “completely destabilized.”

Boeré noted that previous governments made it feasible for physicians to spend quality time with their patients to address all their concerns.

“When this occurs, it keeps people at home and out of emergency departments and hospital wards.”

She also put a call out to other Canadian jurisdictions looking for skilled physicians, when the time comes.

“I will not, however, abandon my fellow Albertans or my colleagues as we face the COVID-19 pandemic. “

The School of Public Policy at the University of Calgary published a research paper on Monday outlining its concerns with the timing of the changes.

“During a pandemic is not the right time to embark on physician compensation reform,” the paper said. “This gives the government time to reconsider the controversial approach taken prior to the COVID-19 pandemic.”

The paper acknowledged Alberta has some of the highest fees for service payments per physician in Canada and that the system has “significant and inherent inefficiencies” as outlined in the 2019 MacKinnon report.

The paper also said the COVID-19 pandemic has demonstrated the value of moving Alberta’s family physicians to an alternative payment model.

It recommended the government allow doctors to do that on a voluntary basis for the time being.