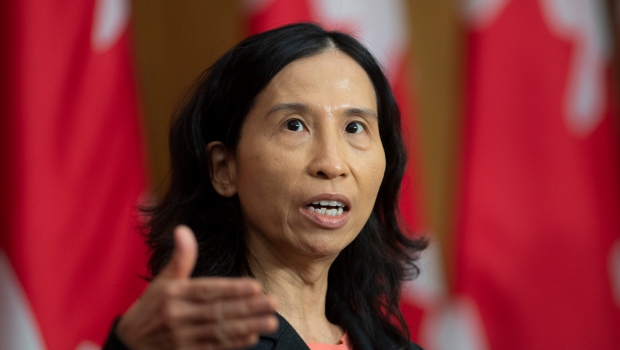 OTTAWA — Canada’s top doctor is hitting back at criticism that public health guidance has shifted during the COVID-19 pandemic, saying that key messages have stayed the same — but advice has evolved alongside the science.

She said those key messages include encouraging Canadians to physically distance, wash their hands and reduce close contacts. Public health advice, Tam insisted, has only “evolved” as researchers learn more about the novel coronavirus.

“Now, science evolves, understanding of the pandemic evolves. So we have to evolve our public health measures, our advice, along with it,” Tam said.

She provided the non-medical mask mandate as a key example of this, noting that the science on non-medical masks evolved, so the recommendations did as well. Public health officers shifted their advice from discouraging the use of non-medical masks to requiring their use in public spaces.

“This is science evolving, and it’s our responsibility to evolve with it,” Tam said.

Her comments come as some Canadians have expressed frustrations with public health messaging. Key voices in these critiques have been business owners, some of whom have pushed back as restrictions force them to shut their doors.

In a letter sent to the prime minister on Wednesday, Goldy Hyder, the president and CEO of the Business Council of Canada, wrote about how the public messaging can be “confusing.”

“Canadians have grown increasingly frustrated by confusing and contradictory public health advice, causing some to lose faith in the system’s ability to protect them. This cannot be left unaddressed,” Hyder wrote.

There has also been some pushback in the provinces. A coalition of fitness business owners in Quebec ramped up their rhetoric in opposition to the provincial COVID-19 restrictions which have shuttered their doors, threatening to reopen in defiance of the rules.

The 200 gym, yoga studio, martial arts and other fitness centre owners said that unless the government provided data showing their centres are linked to COVID-19 outbreaks, they would reopen. Quebec Premier Francois Legault fired back, saying he would fine anyone who flouts the rules. The coalition ultimately backed down on the threat, opting for protests instead, but they said they are prepared to take further action.

Restaurant owners in red zones have echoed the complaints, calling for more evidence to validate the restrictions. The decision to cancel trick-or-treating in Ontario hot zones also led to some spirited debate, with some experts left wondering why the government would oppose something that the experts suggested could be done with relatively low risk.

“The goal should be to find ways to do things safely rather than cancel,” wrote Infectious Disease Physician Isaac Bogoch on Twitter on Oct. 19, when the news of the cancellation first emerged.

“Halloween shouldn’t be too tough to do safely: Outside, wearing masks, restricted to family units, distant from others — is about as low risk as it gets.”

“We are trying not to do blanket public health measures we’re trying to target it to what’s going on in the communities,” Tam said.

She said that in order to complete this marathon, everyone needs to do their part.

“We need both the public doing its part, and public health,” Tam said.

Just weeks after Canadian families cancelled their Thanksgiving plans in a bid to keep the COVID-19 pandemic under control, experts are now hinting that similar precautions may be required as the holiday season looms.

“I think this Christmas is not going to be the same as Christmas 2019. This is a different kind of Christmas,” Tam said.

She cautioned that Canadians will need to perform individual risk assessments before considering any kind of gathering, and that families will need to follow “basic core public health measures.”

Her comments come after Trudeau issued a similar warning on Tuesday.

“It’s frustrating to have to explain to your kids in many parts of the country, like here in Ottawa, that we’re not going to be trick-or-treating this weekend. And it’s frustrating knowing that unless we’re really, really careful, there may not be the kinds of family gatherings we want to have at Christmas,” Trudeau told reporters.

“My six-year-old asked me a few weeks ago, ‘Dad, is COVID-19 forever?’ I mean, he’s in Grade 1, this was supposed to be his big year as a big boy, and they’re not even singing in his classroom.”

Formal public health guidelines have yet to be issued for the holiday season, but Tam said that one thing is certain now.

“I think that Christmas is not going to be the same Christmas as last year, and that we need to be very vigilant,” she said.