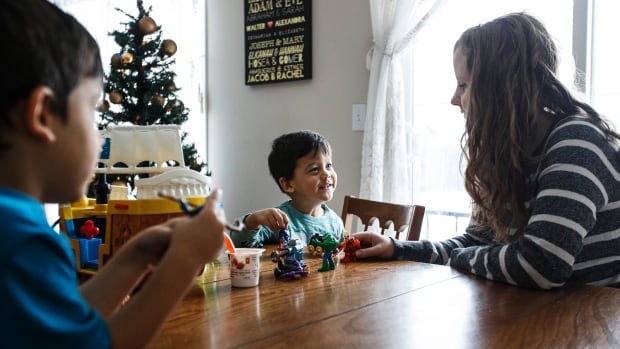 Armando Perez was only three months old when he got itchy.

His mom, Alexandra Perez, says it wasn’t normal scratching that could be fixed with a cute pair of baby mittens. It was so bad that there were blood stains on his bedsheets and scabs on his little arms and legs.

At first, she thought Armando might have an allergy.

“I tried different laundry detergents and different body washes, but he was still itchy,” recalls Perez, as the now 2 1/2-year old and his big brother and little sister play with their grandpa in the downstairs of their Edmonton home.

She says she took the boy to see a doctor, blood tests were ordered and they came back “totally out of whack.” The doctor sent Armando to a specialist and he was admitted for a week to the city’s children’s hospital for more testing.

‘The only one we know of in Alberta’

Perez and her husband, Walter, soon found out their son has progressive familial intrahepatic cholestasis — an ultra-rare genetic liver disease that affects one in every 50,000 to 100,000 children born around the world.

Dr. Cara Mack, a pediatrician at Children’s Hospital Colorado, says there are 40 to 80 cases of the disease diagnosed each year in the United States. And there are six different types.

Armando has Type 2, which is caused by a gene mutation that decreases bile flow.

Mack, who hasn’t treated Armando, says 100 per cent of Type 2 patients are symptomatic.

“Because of the fact that bile acids are stuck in the liver … that directly damages the liver,” says Mack, who notes it leads to scarring and eventually cirrhosis.

Mack says it also causes growth delays because children aren’t able to break down fats or absorb Vitamins A, D, E and K.

“You get significant deficiencies in those vitamins that can lead to, for example, significant bleeding,” she says. “If you are Vitamin D deficient, you can have thin bones and fractures.

“The last major symptom you get is severe itching because the bile acids are stuck inside the liver. They go backwards into the bloodstream and accumulate in the bloodstream.”

That causes children to “itch like crazy,” she said.

The itching continues day and night, which prevents many children from getting a good night’s sleep. It can even limit their appetite.

“It impacts every aspect of their life.”

It’s hard to watch him when you can’t do anything.– Alexandra Perez

Perez says she was shocked to learn that Armando has the rare genetic disease.

Both she and her husband are carriers of the gene that causes it, and there’s a 25 per cent chance of passing it on to a child. Their two other children don’t have the disease.

“Armando is the only one we know of in Alberta,” she says. “We only know of five other kids in Canada, so six in total that we know.”

Perez says Armando was put on a special formula with a fat he could absorb and he took vitamins and several different medications.

“He did improve so he wasn’t jaundiced anymore.”

But, she says, her happy little boy is still scratching.

“The itch that comes from it is so intense and extreme,” explains Perez. “It’s constantly all the time, internal, so it can’t be taken away. He’s just always, always itchy.”

Armando is to start a clinical trial soon that could address the itching.

“It doesn’t do anything for the progression of the disease, but it will help with his symptom of being itchy, which is his main problem,” says his mom.

In the meantime, his parents will continue to watch for signs that he’s getting sicker: losing weight, turning yellow, an inflamed belly.

“It’s hard to watch him when you can’t do anything.”

Perez says it’s even more difficult knowing Armando is likely to need a liver transplant before he turns 10.