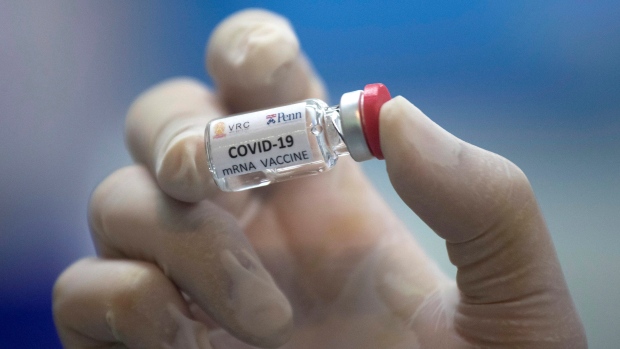 TORONTO — Developing a COVID-19 vaccine is a huge undertaking. Scientists around the world are working to find a way to immunize humans against a virus that nobody knew anything about even six months ago, and get the vaccine into production in a far shorter timeframe than the research process normally allows.

But once they succeed, public health leaders will be left with major dilemmas of their own – ones less about the practical aspects of stopping the novel coronavirus than the ethical problems that accompany a vaccine.

Should the focus be on decreasing the number of cases, or the number of deaths? Is protecting those most at risk of suffering serious complications worth letting the virus continue to run relatively unchecked in the population at large? Will all parts of Canada have to follow the same rules, or does it make sense to use different strategies in different regions?

In short, who gets to be at the front of the line?

HEALTH-CARE WORKERS, THEN WHO?

There is actually widespread agreement on who should be vaccinated first: health-care workers, both to show appreciation for them putting themselves in harm’s way by treating COVID-19 patients and to avoid staffing shortages in the sector by immunizing workers to the disease.

Once all the health-care workers have been vaccinated, though, it’s not at all clear who should be next.

“After health-care workers, it gets a little tricky,” Alison Thompson, an assistant professor specializing in public health ethics at the University of Toronto’s Dalla Lana School of Public Health, told CTVNews.ca Wednesday via telephone.

Normally, the goal of a vaccination program is to promote herd immunity – building up enough resistance to the virus that it is unable to spread, and thus dies out. Due to the urgency of the COVID-19 pandemic, though, Thompson said there might be an argument for minimizing the number of deaths in vulnerable populations before embarking on a herd immunity campaign.

A decision to focus on vulnerable groups comes with its own predicaments. Should seniors be prioritized over those who have underlying health conditions? What about employees in risky workplaces, or those whose immunity to the virus has been weakened by poverty and poor nutrition?

There’s another problem, too: vaccine candidates are being rushed through the research process. What normally takes years of development is being compressed into a timeframe that could be less than 12 months.

Although clinical trials of potential vaccines will still involve watching for signs of safety concerns, the shortened research period means long-term effects will not be fully understood when a successful vaccine is first given to the public

If the immunocompromised are among the first to be given a vaccine, Thompson said, complications could ensue.

“If you do target vulnerable populations … after health-care workers, it can cause problems,” she said.

“Their vulnerability to the virus can, perhaps, also make them more vulnerable to safety and effectiveness issues which we won’t know about.”

LEARNING FROM HISTORY, AND AI

One group of Canadian researchers is looking to take the decision out of human hands to a certain extent. Professors at three universities in Ontario and Nova Scotia are building an artificial intelligence model that they believe will be able to analyze all the factors at play and provide guidance on how to most effectively deploy vaccines.

Daniel Ashlock, a math professor at the University of Guelph, said in a press release that the model will be made freely available to public-health decision makers, potentially as soon as late this summer.

“Knowing who, how and where to vaccine first is critically important to mitigating the spread of the virus,” he said, suggesting that the tool could be used to determine whether vaccinating grocery store workers or vulnerable populations will have a greater effect on public health, for example.

When making those sorts of decisions, public health officials may also look to guidance that was created in preparation for another pandemic – one of influenza.

The Public Health Agency of Canada (PHAC)’s planning guidance for a flu pandemic, which was last updated in 2018, includes 28 questions meant to inform decisions around who to vaccinate first, covering everything from the characteristics of the vaccine itself to what is happening elsewhere in the world to political considerations.

For a flu vaccine, it suggests likely target groups – in no particular order – could include those at highest risk of suffering a severe outcome from influenza, healthy children and adults who can help build up herd immunity, health-care workers, others working or living in high-risk settings, and those most likely to transmit the virus to those most likely to die from it.

The document also notes the inherent risks of pandemic vaccinations, including that a vaccine might not be 100 per cent effective, that availability could be limited and that not everyone might be willing to receive the vaccine.

Thompson said the basic principles of the vaccination strategy outlined in the documents could be applied to a COVID-19 vaccine. She said some of the specific advice might not be relevant, including the suggestion to prioritize vaccinating healthy children.

“There are still so many questions about the role of children in transmitting this virus,” she said.

HOW MUCH CAN THE FEDS DO?

There are also questions around how much PHAC and the federal government will be able to mandate. The flu pandemic guidance specifically notes that it “is not an actual response plan” and that provinces and territories ultimately have jurisdiction over most aspects of pandemic response, while the federal role is largely limited to procuring supplies, overseeing research and building a national consensus.

Thompson said she would like to see the government work toward a national strategy with full buy-in from each province and territory, especially because of the amount of “cross-border activity” and travel happening within the country.

“It may not make a lot of sense from an epidemiological perspective to not do that, but it also morally might be problematic if one province’s or territory’s strategy is not equitable with the rest of the country,” she said.

Tam said June 2 that the government has begun procuring the supplies it will need to conduct “mass vaccinations” and planning for how vaccines will be administered once they are approved for use.

What remains to be seen is how easy it will be for Canada to obtain a vaccine that is developed outside the country. The Canadian Center for Vaccinology at Dalhousie University in Halifax is conducting a clinical trial of one vaccine candidate, but no other potential vaccines have been approved for trial here. If another vaccine is found to be safe and approved for manufacturing first, Canada may find itself as one of many countries jockeying to import it before production can ramp up.

“Whoever does get the vaccine first is going to have a lot of power,” Thompson said.

Many countries, including Canada, China and the U.S., have vowed to consider a vaccine a global public good and make it available wherever it is needed most.

That creates other ethical concerns, as the need to protect Canadians will be balanced against the concerns of those in countries where proper physical distancing threatens the accessibility of food and water, Thompson said.