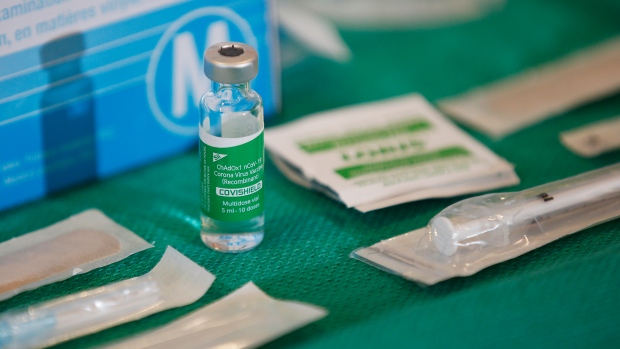 LONDON — The European Union’s medicines regulator will announce the conclusions of its investigation into the possible connection between AstraZeneca’s coronavirus vaccine and rare blood clots later Wednesday.

Earlier this week, a senior official from the European Medicines Agency, or EMA, said there was a causal link between the AstraZeneca vaccine and the rare blood clots that have been seen in dozens of people worldwide, among the tens of millions who have received at least one dose.

Marco Cavaleri, head of health threats and vaccine strategy at the Amsterdam-based agency, said in comments to Rome’s Il Messaggero newspaper on Tuesday that “it is becoming more and more difficult to affirm that there isn’t a cause-and-effect relationship between AstraZeneca vaccines and the very rare cases of blood clots associated with a low level of platelets.”

But Cavaleri acknowledged the agency hadn’t yet figured out how exactly the vaccine might be causing these rare side effects. The agency said its evaluation “has not yet reached a conclusion and the review is currently ongoing.”

The EMA, World Health Organization and numerous other health authorities have said repeatedly that the AstraZeneca vaccine is safe and effective and that the protection it offers against COVID-19 outweighs the small risks of rare blood clots.

Last week, the EU medicines regulator said “there is no evidence that would support restricting the use of this vaccine in any population,” though an expert said more brain clots were being reported than would be expected, and it would continue to assess incoming data.

In March, more than a dozen countries, including Germany, suspended their use of AstraZeneca over the blood clot issue. Most restarted — some with age restrictions — after the European Medicines Agency said countries should continue using the potentially life-saving vaccine.

But the frequently changing advice in some countries on who can take the vaccine has raised concerns that AstraZeneca’s credibility could be permanently damaged, spurring more vaccine hesitancy and prolonging the pandemic.

In Britain, which has given out more doses of AstraZeneca vaccine than any other country, the medicines regulator reported there were 22 reports of rare brain and other clots, including people who had a low blood platelet level, among more than 18 million who got at least one dose.

Any further doubts about the AstraZeneca vaccine would be a setback for the shot, which is critical to Europe’s immunization campaign and a linchpin in the global strategy to get vaccines to poorer countries.

The AstraZeneca vaccine is cheaper and easier to use than rival vaccines from Pfizer-BioNTech and Moderna and has been endorsed for use in more than 50 countries, including by the 27-nation EU and WHO. U.S. authorities are still evaluating the vaccine.