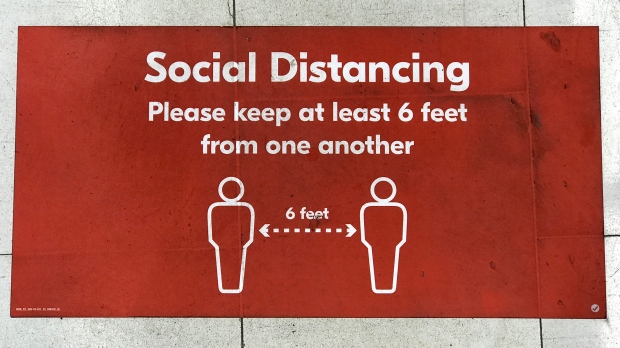 TORONTO — A new study is suggesting that physical distancing may not be the key to preventing the spread of COVID-19 in indoor settings. Instead, the duration of time spent in an indoor location, along with mask usage, may be a better indicator of your risk and how much opportunity there is to breathe in airborne particles.

In one scenario provided by an interactive website based on this new theoretical model, even if people were physically distanced inside a church, if they were wearing no masks and singing, they would be in danger of contracting COVID-19 from another person in the room within four to five minutes.

The research behind the model, published Tuesday in the journal PNAS, takes a closer look at the six-foot rule — two metres in Canada — which has become the standard recommendation from governments for how to safely distance from others while in public.

Researchers pointed out that while the two-metre rule was originally developed when the prevailing belief was that COVID-19 transmission occurred solely through heavier droplets projected from the mouth and nose during speech, coughing and sneezing, our understanding has evolved since then.

Increasingly, scientists have been speaking up about the role of aerosols, which are smaller particles that linger in the air longer, in COVID-19 transmission.

“The importance of airborne transmission of COVID-19 is now widely recognized,” the research stated.

Researchers listed several examples that suggest airborne transmission has been occurring, such as an indoor choir practice of more than two hours in Washington state, where most of the choir contracted the virus despite not all of the people being within two metres of the infected choir member; a two hour-long bus ride in China during which 23 of 68 passengers contracted the virus regardless of seating; and a case of the virus spreading through apartments in South Korea that were connected by air ducts.

The fact that indoor transmission accounts for the majority of COVID-19 infections adds credence to the theory that the virus can linger in the air for longer periods as well.

The distinction in how transmission occurs is important, because while studies have shown that two metres is a sufficient distance to put between two people to remain safe from most droplets expelled from a sick person’s mouth or nose, if airborne transmission is driving infections, as some experts now believe, this means that a person following physical distancing guidelines could still get sick from airborne particles.

In this new study, researchers developed a theoretical model based on airborne transmission in order to come up with a new safety guideline for the time it is safe to spend in a certain space.

Models of airborne transmission are based on the idea that the pathogen is distributed uniformly through a well-mixed indoor space.

So if there is one infected person in an indoor location with others — say, a grocery store or a restaurant — how long can an uninfected person spend in that space before they run the risk of contracting the virus?

The amount of time that it is safe to spend in an indoor space differs depending on a number of factors, researchers stated, such as face-mask usage, the size of the space and the amount of ventilation.

Researchers also looked at how different respiratory activity — such as singing, speaking and breathing — contributed to the overall amount of exhaled particles, and thus the potential amount of pathogens expelled. They found that singing is the most dangerous activity, allowing more particles to enter the air and spread faster, while breathing through the nose was the least dangerous.

Weighing these factors, researchers created a formula to judge the time a person could spend in a specific indoor space with at least one infected person in it before they would be in danger of contracting COVID-19.

“To minimize risk of infection, one should avoid spending extended periods in highly populated areas,” the research stated.

“One is safer in rooms with large volume and high ventilation rates. One is at greater risk in rooms where people are exerting themselves in such a way as to increase their respiration rate and pathogen output, for example, by exercising, singing, or shouting.”

Two graphs showed estimates for how long it would take in a classroom or a nursing home for a person to become in danger of contracting the virus if it was in the air.

Assuming a low transmissibility and moderate risk tolerance for children, the research estimated that with natural ventilation, masks and social distancing, it would take around three days of constant time in a typical classroom of 20 children for one of them to risk contracting the virus from one infected classmate, regardless of whether social distancing was followed.

A nursing home room with around three occupants and mechanical ventilation would become unsafe in just a little over a day, provided they were wearing masks, the researchers estimated. Without masks, it would take only 30 minutes of being in a typical nursing home room with an infected person before one of the other occupants was in danger of contracting the virus, the study suggested.

“Evidently, the Six-Foot-Rule […] becomes inadequate after a critical time,” the research stated.

Obviously, the average person does not know the exact dimensions and ventilation of every building they enter in order to plug them into a formula.

But researchers released a website along with their research that helps to simulate some common indoor locations.

The website allows people to select an average room such as a classroom or a restaurant, along with the number of people inside that room and what they’re doing — resting, singing, wearing masks or not wearing masks — and calculate the average amount of time it would be safe to spend in that room if there was virus present in the air.

For instance, according to the app, in an average classroom in which the occupants are singing adults with no masks on, 10 people would be safe for only five minutes.

The safety guidelines would be violated in three minutes if there were 25 people in the room.

The website estimates that five people over the age of 64 years who were simply talking to each other with no masks on in a living room would be in danger of contracting the virus from an infected person in the room within just 47 minutes.

The app also allows viewers to customize a room to assess the safety of more specific buildings and situations.

The researchers acknowledged that their model includes estimates of the transmissibility of the virus and an assumption that the pathogen would be evenly mixed in a room, which may not be true in an indoor setting with poorer ventilation.

“We emphasize that our guideline was developed specifically with a view to mitigating the risk of long-range airborne transmission,” the research stated. “We note, however, that our inferences [of infectiousness of exhaled air] came from a number of superspreading events, where other modes of transmission, such as respiratory jets, are also likely to have contributed. Thus, our estimates for [the infectiousness of exhaled air] are necessarily overestimates, expected to be higher than those that would have arisen from purely long-range airborne transmission.”

This new research doesn’t mean that it’s pointless to distance from others in indoor spaces. Being directly coughed or sneezed on by a person sick with COVID-19 is dangerous regardless of the amount of time you’ve spent in a room.

But when evaluating the risk of indoor locations where other individuals might be infected, it seems that the most important measures to keep you safe could be a face mask and a shorter trip as opposed to only a two-metre bubble.