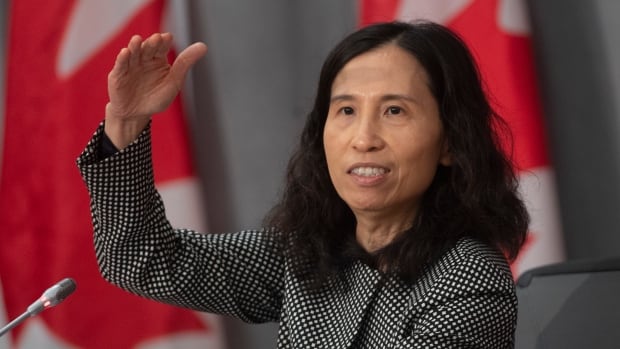 Federal health officials are projecting there could be nearly 32,000 cases of COVID-19 and between 500 and 700 deaths in Canada by April 16, and even with relatively strong control measures in place, there could be between 11,000 and 22,000 deaths over the course of the pandemic.

The figures came Thursday morning as officials released modelling on how the COVID-19 crisis could unfold in the country, and suggested that containment measures such as physical distancing and quarantines could be in place for months to come.

If no containment measures had been taken, which was not the case in Canada, there would be a worst-case scenario of about 300,000 deaths.

Officials said the caseload in Canada is doubling every three to five days, which is considered a relatively positive trajectory compared to other countries. Tam said that is in large part because of lessons learned from other countries about how strong control measures can limit the spread of the virus.

Tam said she is hopeful Canada can stay in the green zone and keep infections and deaths relatively low.

‘Prevent every death that we can’

She warned that measures that can create “hardships” are critical to keep ICU admissions and deaths as low as possible.

Tam said it’s early to know how close Canada is nationally to seeing a “peak” in transmission. But she cautioned that even as there’s a decline in transmissions, Canadians must stay the course with preventative measures as there is a risk of the virus re-igniting.

“What we do together now will buy us more time to further understand the virus and to develop treatments and vaccines,” she said.

“We are the authors of our fate. Together we can plank the epidemic curve.”

Tam said if 2.5 per cent of the population were infected, there would begin to be strains on the health-care system.

Canada’s chief public health officer Dr. Theresa Tam says models are “imperfect” but that they can help understand the state and trajectory of the pandemic and the effect of public health measures to combat the spread of COVID-19. 1:03

The analysis of how many people could become infected, get sick or die from the virus comes just before the long holiday weekend.

Tam said models are “imperfect” but they can help understand the state of the pandemic and where it might go, along with the effect of public health measures on the transmission of the virus.

Prime Minister Justin Trudeau has repeatedly told Canadians that how fast and far the virus spreads will depend largely on how stringently Canadians follow public health advice, including physical distancing, handwashing and staying home whenever possible.

Several provinces have already released projections. Ontario estimates the number of deaths in the province could reach between 3,000 and 15,000 people over the course of the pandemic, which could last up to two years.

Tam has cautioned that models that try to predict how many people could become infected and die from the coronavirus are not “crystal balls,” and that it’s important to focus on data on what is happening in real time.

How projections actually play out depends largely on actions taken by individuals and governments, she said.