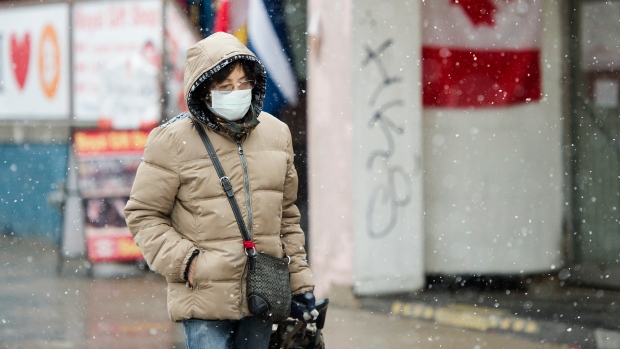 TORONTO — A leading Canadian infectious disease specialist says, despite global efforts, COVID-19 cannot be contained and authorities need to focus instead on creating a warning system to alert seniors when to go into isolation.

Dr. Neil Rau says it’s too soon to begin separating at-risk seniors from other groups, but an alert system needs to be put in place for when an outbreak arrives.

“Better to start protecting the vulnerable group by separating them from society at large rather than asking all of society to separate themselves from each other, because the economic consequences are so huge,” Dr. Neil Rau told CTVNews.ca on Friday.

Rau is among a small but growing group of doctors who disagree with the World Health Organization, which asserted earlier this week that COVID-19 can be contained if countries step up their efforts.

“I don’t think this is containable,” Rau said. “If we were to say, ‘We can’t control it, we have to let it go, let’s face the consequences in a logical way,’ I think we’d be better off.”

Dozens of residents at a Seattle-area nursing home have fallen ill with COVID-19. So far, 10 of those people have died, making the nursing home the epicentre of coronavirus deaths in the U.S.

French President Emmanuel Macron visited a nursing home on Friday and encouraged people — particularly young people — to limit visits to the elderly as a precautionary measure. In Italy, where nearly 200 people have died from COVID-19, elderly people are being told to stay at home.

When the novel coronavirus first emerged in January, it was widely compared to SARS. Both diseases emerged in China and primarily impacted the respiratory system. While SARS was a much deadlier disease, COVID-19 is able to spread much more easily, sometimes from people who have little to no symptoms. Scientists say droplets from an infected person’s nose and mouth can contaminate surfaces for an extended period of time, though it’s unclear for how long.

Rau said it would be a mistake to continue treating COVID-19 like SARS.

“This virus has stopped reading the SARS playbook many, many weeks ago,” he said.

“What’s going on is we’re trying to contain a virus that is not containable and, in the pursuit of containment, we’re adopting strategies that are extremely aggressive and have huge economic consequences.”

A proper response, Rau suggests, is to implement a warning system, similar to when a tsunami is detected, that can warn those most at risk before an outbreak arrives.

Such a system could alert vulnerable people, such as seniors and those with compromised immune systems, to distance themselves from mass gatherings and avoid children or other visitors while the threat is present, Rau said.

“We have no other option for them,” Rau said.

The best way to protect vulnerable people would be through a vaccine, Rau says, but scientists haven’t developed one yet.

More than 101,000 cases have been confirmed internationally, including more than 3,400 deaths worldwide. In Canada, 49 people have tested positive for the disease. No deaths have been reported, but a woman in her 80s remains in critical condition at Vancouver General Hospital.

Canada’s first community case of COVID-19 was detected in B.C. on Thursday in a woman who did not travel overseas recently and has had no known contact with anyone infected.

The development suggests that a community outbreak, which government officials expect will happen, could be soon.

The country now faces a critical question in how it responds, Rau said.

“This is the turning point where we have an opportunity to shine relative to other countries. We can do this differently,” he said.

“If we are intelligent about this and keep tracking the disease at a community level, looking for mild cases, not necessarily with a view to isolate them … then you can get an idea of what is the risk level for seniors, and when should they be careful about visitors. That’s going to be the trick.”