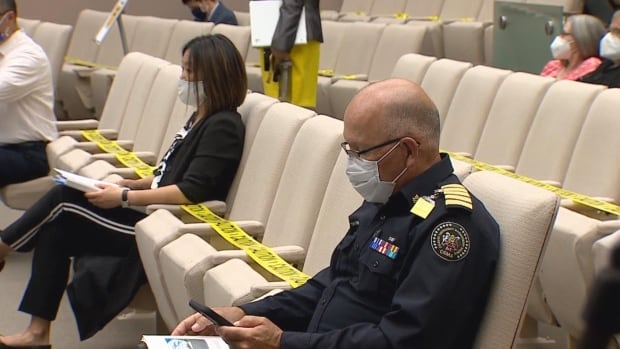 Over the weekend, new cases jumped by 368, bringing the province to a total of 1,100 active cases.

Thirteen regions in the province are also now under a “watch” designation, which means the area has more than 50 active cases per 100,000 residents. The highest is Clear Hills County, at a rate of 366.9 per 100,000 people. That’s a similar case rate to U.S. states like Washington, Oklahoma and Kentucky.

Craig Jenne, an infectious disease specialist at the University of Calgary, said the weekend’s numbers unfortunately confirm that steady increases over the past week aren’t a blip.

And, he said that could mean there’s a need to implement more restrictions.

The number of people in hospital has doubled over the past week, up to 86, with 17 people in intensive care.

Calgary city council heard presentations from experts on Monday as it weighs whether to make masks mandatory on Calgary Transit. Council is expected to make a decision Tuesday, and could also potentially direct administration to look into drafting a policy or bylaw to make masks mandatory inside city properties or other public indoor spaces.

Dr. Raj Bhardwaj said if it were up to him, masks would be made compulsory immediately and that rule could be scaled back if the active case rate decreases, rather than waiting for circumstances to worsen before implementing that restriction.

Thank you <a href=”https://twitter.com/hashtag/yyccc?src=hash&amp;ref_src=twsrc%5Etfw”>#yyccc</a> for having me.<br>I’m sitting in Olympic Plaza, reading twitter and crying right now.<br>I don’t want to go back to a lockdown.<br>I fear for the health &amp; mental health of my friends, family, &amp; colleagues if we end up seeing big numbers of people getting sick in the fall <a href=”https://t.co/lb6HdrF0G9″>pic.twitter.com/lb6HdrF0G9</a>

“This is all about spread within our communities and we’re seeing it take off in Calgary … unfortunately we have to do something about it, the sooner the better,” he said.

“They’re now dealing with 15 to 20 contacts … they’ve got a bit of a challenge on their hands,” he said.

Nenshi himself recently had to be tested after a speaker at a city council meeting contracted the illness. The mayor said his test came back negative.