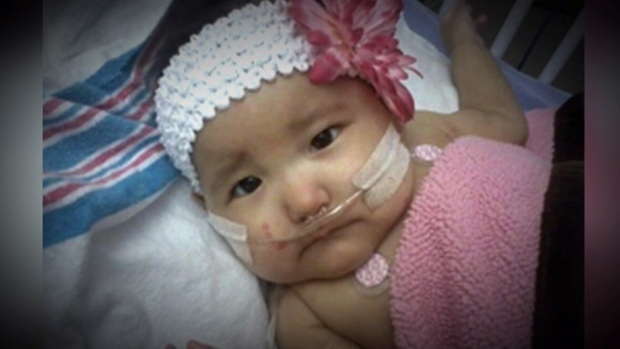 TORONTO — Alyssa Simaganis had a good pregnancy, and when her daughter Kianna was born in 2012, she was “perfect.” But things took a frightening and unexpected turn three months later.

Kianna was sent to a Saskatoon hospital, fighting for her life.

“She ended up in ICU, on a ventilator. She was intubated for about two weeks… I think that was the hardest part of it all was seeing her in an induced coma, not being able to carry her. Her eyes weren’t open,” Simaganis said.

For seven months doctors didn’t know why she was sick, they tested Kianna for everything, until she was finally diagnosed with a rare genetic disease, known as Severe Combined Immunodeficiency (SCID), more commonly known as “bubble boy” disease, the most severe type of immune deficiency disorder found in infants.

“I was shocked … my reaction was just why? How? I never expected anything like that to happen,” said Simaganis.

Children diagnosed with the disorder have genetic mutations that prevent enough immune cells from being produced, meaning they lack the ability to fend off germs. Even a common infection can be deadly. A lack of a national testing strategy means some newborns are falling through the cracks unnecessarily, and doctors are pushing to make screening a priority.

“Infants who are not picked up early on in life will inevitably develop a number of serious and potentially life threatening infections, many of them often going on at the exact same time,” said Dr. Geoff Cuvelier, director of the Pediatric Stem Cell Transplant Program at CancerCare Manitoba and the Winnipeg Children’s Hospital.

“By the time the infections have set in, they’re often incredibly difficult to treat. Sometimes children don’t survive these infections, even if we can manage to treat them. They can become a significant problem for many years down the line.”

Left untreated, children with the condition will die by the time they are a year old due to severe infections. Without screening, a diagnosis is often missed or delayed until after six months of age following recurring infections and sometimes irreversible organ damage.

“I’ve had the unfortunate experience of seeing children that have had SCID and were not diagnosed and came to the hospital with infections that were throughout their bloodstream, throughout their bodies,” said Dr. Kirk Schultz, Professor of Pediatrics at the University of British Columbia and the Children’s Hospital in Vancouver.

“It’s devastating to us as a doctor, knowing that we actually have a cure … and if we could have only offered it and rescued their immune system before they got that infection that took their life away.”

There is a simple diagnostic blood test that can be administered to newborns using the “heelprick” test — and treatment is available. But in Canada, where healthcare is a provincial jurisdiction, the availability of the life-saving test will depend on where one lives.

Ontario became the first province in Canada to test for SCID in 2013. Nova Scotia, New Brunswick, Manitoba, Alberta, and parts of the Northwest Territories and Nunavut now also screen newborns, and there is a push to get the rest of the country on board as well.

Manitoba, meanwhile, is also the only province whose screening program looks for all forms of the disease including IKBKB SCID, the type that affected Kianna. It is a particular mutation that is more prevalent among some First Nations children whose backgrounds trace back to Nelson House and South Indian Lake, Man., according to experts.

David Vetter, famously known as “the boy in the bubble” had SCID and much of what science has learned about the condition was a result of his life and death in 1984. Vetter’s brother was born with the disease, but died before a matched bone marrow transplant had a chance to work, according to a PBS documentary.

So when Vetter was born, and his sister was not a match, doctors and his family made the decision to keep him in a sterile environment. He spent his life confined in a plastic bubble as doctors waited for a treatment. It came when he was 12, when science had advanced enough that he could receive a transplant from his sister, despite not being an exact match. But the procedure introduced the cancer-causing Epstein-Barr virus into his system and Vetter died four months after the procedure from lymphoma.

Today, treatment involves a blood stem cell transplant, usually from a parent or sibling. It is a very specialized procedure available in six Canadian Children’s Hospitals — Vancouver, Calgary, Winnipeg, Toronto, and two in Montreal — and requires a hospital stay of one to two months.

The most important predictors of success are undergoing the procedure before the infant has had serious infections, preferably between one and two months of age, doctors say. Waiting too long makes the process much more complicated.

“If we can pick these children up before about three months of age and get them to a stem cell transplant before that age, they markedly improve their outcomes,” said Cuvelier. “We actually do save lives.”

Kianna’s brother Daxton was also diagnosed with SCID last year, but they were able to treat him in time. Children who are successfully treated go on to live normal lives as adults.

“They’re alive, and they are living into their teenage years into their 20s. We see these children for many, many years after they’ve had a transplant,” said Schultz.

“It’s so rewarding to see a child or a young adult who we know would not have survived that far, going on and thinking about getting married or going to university or having a job,” he added.

For Kianna, who was diagnosed late, it will be a different journey. She now lives with seizures and her experience is why Simaganis wants her story shared.

“I don’t want anyone to go through what we had gone through.”