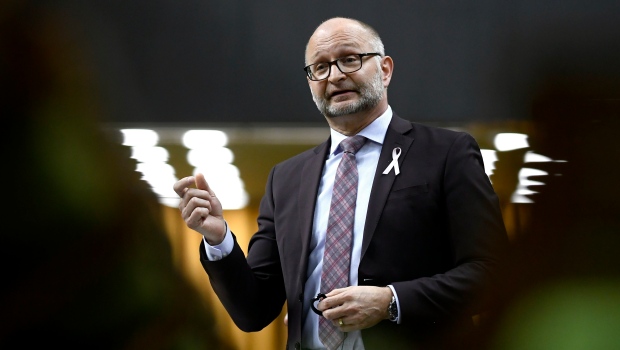 OTTAWA — The Trudeau government is launching public consultations today on how best to respond to a court ruling that concluded it’s unconstitutional to allow only Canadians who are already near death to seek medical assistance to end their suffering.

Prime Minister Justin Trudeau has said the government accepts the Sept. 11 ruling of the Superior Court of Quebec and will amend the federal law accordingly.

But while the government has agreed to eliminate the near-death requirement, its consultation questionnaire suggests other hurdles could be imposed to ensure what it considers to be a balance between a person’s right to choose to end their life and protecting vulnerable individuals who could be pressured into an early death.

Under the court ruling, it has until March 11 to amend the law.

Canadians will have until Jan. 27 to offer their views on how the law should be amended through the online questionnaire being launched today.

At the same time, Justice Minister David Lametti, Health Minister Patty Hajdu and Disability Inclusion Minister Carla Qualtrough will be holding roundtables and meetings with stakeholders and other key actors.

The consultation schedule — which leaves only six weeks for the government to draft new legislation and pass it through the House of Commons and Senate in time to meet the court’s deadline — suggests the government will have to ask the court for an extension.

The ruling came on the first day of the federal election campaign last fall.

The ruling technically applies only in Quebec but, since the Trudeau government declined to appeal the decision, any amendments will apply across the country.

The federal law went into effect in June 2016, following a landmark Supreme Court of Canada ruling that struck down the previous prohibition on medical assistance in dying.

Lametti, a backbencher at the time, was one of only four Liberal MPs to vote against the law. As a former law professor, he expressed concern that the law was too restrictive, did not meet the eligibility criteria set out by the Supreme Court and would eventually be struck down as unconstitutional.

The online questionnaire asks people to consider what safeguards should be put in place to prevent abuse if the foreseeable death requirement is removed from the law.

Among other things, it asks people to consider whether:

— The current 10-day period of reflection between requesting and receiving a medically assisted death should be increased.

— The law should require that both the medical practitioner and patient agree that other reasonable treatments and options to relieve suffering have been tried without success.

— Mandatory psychological or psychiatric assessments should be required to determined capacity to consent.

— Mandatory consultation with an expert in a person’s medical condition should be required, in addition to the current mandatory two medical assessments.

While the public consultations are aimed primarily at how to respond to the Quebec court ruling, they will also dip into broader issues that were excluded in the new law and which must be considered as part of a parliamentary review of the law that is to begin this summer.

Those issues include whether mature minors and those suffering strictly from mental illnesses should be eligible and whether people who fear losing mental capacity should be able to make advance requests for medical assistance in dying.

The questionnaire asks people to decide if medically assisted deaths should be provided in circumstances where a person who has given consent and whose eligibility has been approved loses the mental capacity to give consent a second time immediately prior to receiving the procedure.

That was the dilemma that faced Audrey Parker, a Halifax woman with terminal breast cancer that had spread to her brain. She chose to die with medical assistance in the fall of 2018, earlier than she wanted, rather than risk losing the capacity to give last-minute consent.

The questionnaire also asks people to consider whether someone diagnosed with Alzheimer’s disease should be able to prepare a document detailing the specific circumstances in which they want a medically assisted death to be administered, after they no longer have the capacity to consent.

This report by The Canadian Press was first published Jan. 13, 2020.

We recognize that medical assistance in dying is a deeply personal and complex issue. Please let us know your views by January 27, 2020. The online questionnaire can be found here: https://t.co/6jUVsTD0xw #AssistedDying