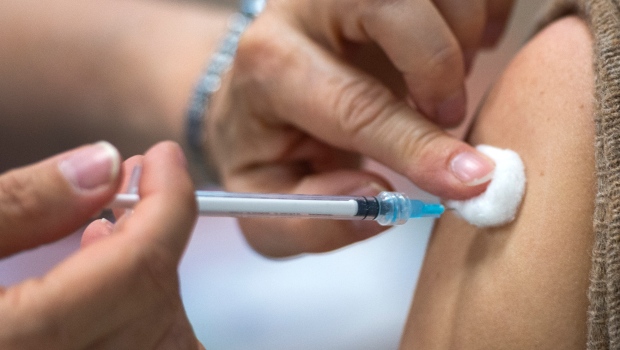 TORONTO — The Public Health Agency of Canada (PHAC) says there have been 6,789 confirmed COVID-19 cases in those who have received the first dose of a vaccine out of more than 13 million people who have been vaccinated.

Of the cases reported, PHAC said a relatively small number has resulted in serious COVID-19 or death.

“As of April 26, out of the 2,274 cases reported above for which outcome information was available, 203 COVID-19 cases were reported to be hospitalized, and 53 cases died due to COVID-19,” the agency said on Monday.

According to data tracked by CTVNews.ca, more than 13 million Canadians have received the first dose of a COVID-19 vaccine as of Tuesday morning.

Experts say it is rare to become sick after being vaccinated, but note that infection is still possible.

“One is most susceptible in the immediate to short-term period following vaccination… to infection due to incompletely established immunity,” Sharkawy said. He added that the time to establish immunity after each dose varies from two to 12 weeks depending on the health status of the person receiving the vaccine and the vaccine itself.

Despite the possibility of infection after vaccination, Sharkawy said this does not mean that vaccines are ineffective or that people shouldn’t get vaccinated.

“The vaccines do protect and do so very well in the vast majority of cases, but it takes our immune system time to mount the adequate response. We need to be mindful of this before we judge a vaccine as ineffective,” he said.

While vaccines aren’t 100 per cent effective, infectious disease specialist Dr. Isaac Bogoch previously told CTV News Toronto that the data from PHAC highlights the benefits of getting first doses into the arms of Canadians as quickly as possible.

Bogoch said this shows that one dose does provide some layer of protection against COVID-19.

“You’re not afforded the same degree of protection as compared to having two doses of the vaccine. Having said that, it’s still pretty significant protection, and depending on the data you read, you are protected from hospitalization after a single dose anywhere from about 60 to 80 per cent,” Bogoch said.

Even if one were to become sick after receiving the first dose of a COVID-19 vaccine, Dr. Zain Chagla, an infectious disease expert with McMaster University in Hamilton, Ont., says the patient will be better off than if had they received no dose.

“Anecdotally, the people that are in hospital after their first dose — where it’s kicked in — are a lot less sicker than they could be. They’re people that you expected to do worse,” Chagla said in an interview with CTV News Toronto.

While infection after the first dose is a rare possibility, experts say there is also a chance that some Canadians may become infected with COVID-19 after being fully vaccinated.

University of Manitoba virologist Jason Kindrachuk told CTVNews.ca in March that these so-called breakthrough infections are expected as not everyone will have an immune response to the vaccines.

“When we look at people that are vaccinated, there is going to be this contingent of people that do not mount a strong enough response to completely defend themselves against getting infected and or developing disease,” Kindrachuk said.

However, Kindrachuk said these infections are typically not a cause for concern.

“Those cases are always the exception and not the norm, and we have to keep our minds on how many infections we’ve seen and in this case, how many immunizations are being administered,” he said.

Kindrachuk added that the likelihood of breakthrough infections will decline as more of the population is vaccinated.

He explained that if a high enough number of Canadians are vaccinated against COVID-19, a single breakthrough infection is unlikely to lead to a large transmission chain or cause recirculation of the virus as communities will have already established “that buffer of people that actually do have protection.”

“The more people that get vaccinated that are surrounding those [breakthrough infections], the lower chance there is of that virus starting to recirculate through the community and making people sick,” Kindrachuk said.

With files from CTV News Toronto