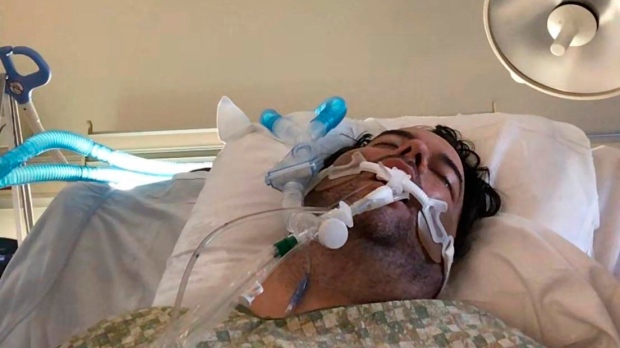 MIAMI — For weeks, Michelle Zymet pleaded with her stepson to avoid going out with friends and to always wear a mask.

“It’s just not the time,” the Florida woman says she told him, begging him to think about his dad, who is at a higher risk of severe COVID-19 illness because he is overweight and diabetic.

One evening in early June, the young man went out against her wishes, gathered with friends and removed his mask while eating and drinking. Days later, he felt cold symptoms and a friend at the get-together told him she had tested positive for the new coronavirus. By then, it already had taken hold in the young man’s household.

The man’s father, John Place, 42, is now fighting the virus at a hospital’s intensive care unit.

The illness’s spread among members of the Plantation, Florida, family highlights the outcome dreaded by authorities who feared the recent surge of cases hitting younger Floridians would spread to older, more vulnerable people.

“They don’t necessarily listen. It could be peer pressure,” said Zymet, 42. “Maybe they think, `None of us are sick. We are fine.’ They don’t understand many of us are asymptomatic and are positive carriers of the virus.”

The young man, who did not want to talk to the media, had told his father and stepmother that he initially thought he had a common cold and took over-the-counter medication. When he heard about his friend testing positive for the new coronavirus, he still didn’t think he had it.

But members of the family started to fall ill one by one, starting with his 14-year-old brother, who is also overweight and was wheezing, coughing and lethargic.

The 6-year-old sister had only a runny nose. The stepmother was achy, with a fever and chills. They all tested positive, but only Place, the father, required hospitalization after four days of fever and nonstop coughing. He has now been in the hospital for nearly three weeks.

With Place unable to work at his photo booth business, Zymet’s friends are raising funds for the family as they brace to handle hefty medical bills.

Zymet said she has been called an “awful mother,” and an “evil witch” for placing the blame on the stepson, but she said she thought it was important to share her family’s story amid a surge of infections first detected among young people.

South Florida mayors gathered earlier this week with Florida Gov. Ron DeSantis and told him that gatherings of young people were a key factor in the rise in cases that emerged in June in their region.

Miami-Dade County Mayor Carlos Gimenez said younger people were celebrating the end of school or college, in some cases joining street protests and otherwise just getting together at house parties, underground venues and restaurants that converted themselves into bars late at night in violation of the rules.

With so many close-knit, multigenerational families in the community, spread to older members of families seemed inevitable, he said.

On Wednesday, Florida passed the 300,000 mark of confirmed coronavirus cases and has been averaging about 96 deaths per day – more than triple the rate it was about a month ago.

Zymet and her family have been isolating at home, and Place was on a ventilator for more than two weeks. She says her stepson has been helping taking care of the younger children and researching the disease while she juggles work in between calls to the hospital, nurses and doctors.

She said the younger generation “won’t know until it hits home.”

“This has definitely brought us together,” she added. “We could have eventually gotten this disease somewhere else. But it is the unfortunate truth that he did bring it home.”