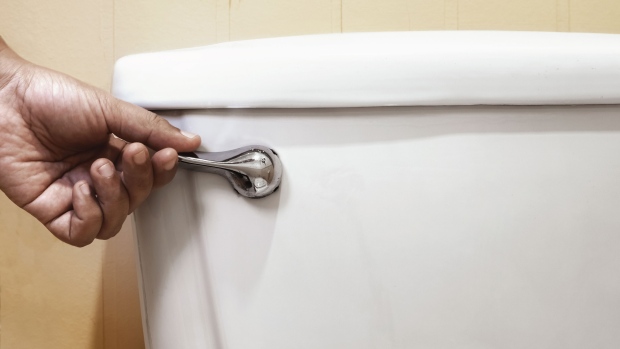 TORONTO — To stop the spread of the novel coronavirus, we’ve strapped on face masks, washed our hands with diligence and sanitized common surfaces again and again.

Now, we might need to add a new prevention method to the list: putting the toilet seat down before you flush.

A new study shows that the spray from flushing a toilet could send potentially infectious particles up into the air and over the toilet seat and bathroom floor, leading to the possible transmission of COVID-19.

Although it’s not a fact we often like to dwell on, many diseases are spread through fecal-oral transmission — in other words, when trace amounts of fecal matter enter your body through your mouth. SARS-CoV-2 — the technical name for the novel coronavirus that causes COVID-19 — is largely spread through droplets produced when an infected person coughs, breathes or sneezes on another person, “but some patients have developed gastrointestinal symptoms such as diarrhea and vomiting, showing that the virus can survive in the digestive tract,” the study says.

This means the virus could be present in a person’s stool, and thus could be spread through the use of a toilet — something that has been suggested in earlier studies.

Published on Tuesday in the scientific journal Physics of Fluid, this new study by researchers at the Yangzhou University in China painstakingly maps out just how far bacteria and water can spray when a toilet is flushed, and what that could mean for COVID-19 transmission.

Researchers looked at two different types of toilets — single tank and double tank, or single-inlet and annular — and found that “without exception, massive upward particle transport is observed for both flushing processes.”

A flushing toilet creates what is sometimes referred to as a “toilet plume.

“During the flushing process, water enters the bowl from a tank under the action of pressure and mixes with the water seal,” the study explains. “This generates turbulent motion, which drives dramatic changes in airflow.”

Aerosol particles can shoot from the toilet bowl at a velocity of up to five metres per second. And even after the initial flush, particles that escaped the toilet bowl will continue to spread through the air, the study said.

Seventy seconds after a single-inlet flush, around 2,700 particles have been sprayed up from the surface of the toilet bowl, the study said.

With an annular flushing toilet, around 1,511 particles can escape within 35 seconds of flushing, and the study notes that “the velocity [of the spray] will be even higher when a toilet is used frequently, such as in the case of a family toilet during busy times or a public toilet in a densely populated area.”

Of those particles disturbed during the flushing process, 40-60 per cent “rise above the toilet seat to cause large-area spread, with the height of these particles reaching 106.5 cm from the ground,” the study revealed.

It’s an extra cause of concern in a high-traffic bathroom.

A study published in April in The New England Journal of Medicine found that the virus remained viable in the air for three hours, and could survive on stainless steel and plastics for up to 72 hours, although its strength decreased exponentially as time went on.

“Cross-infection usually occurs in family bathrooms and public washrooms,” the study states. “A confirmed case usually remains at home for isolation, where shared use of a bathroom is inevitable. The daily flow of people in a public washroom is stunningly large: thus, a confirmed case may cause a massive number of infections. For these reasons, investigation of toilets in the context of epidemic prevention is imperative.”

There has been no evidence so far that bathrooms are or could be a hotspot for transmission, but as we continue to re-open and shift to the new normal, this research reminds us to keep this risk in mind going forward.

The authors conclude their study with three simple recommendations for the public in wake of this knowledge.

The first? Put the toilet seat down before you flush. This will trap the toilet plume and potentially infectious particles in the toilet itself, where they belong. This simple action “can basically prevent virus transmission” from occurring via toilet, the study says.

Of course, some toilets, particularly in public bathrooms, may not have a toilet seat to put down at all.

In this case, the best thing to do is be vigilant about our own personal hygiene.

The authors’ other two recommendations are that we clean the toilet seat before using it — an idea that is particularly pertinent for using public bathrooms — and that we continue to wash our hands carefully after using the toilet.

“Toilets are a daily necessity,” the study states, “but also become dangerous if used improperly, especially against the current scenario of a global pandemic.”