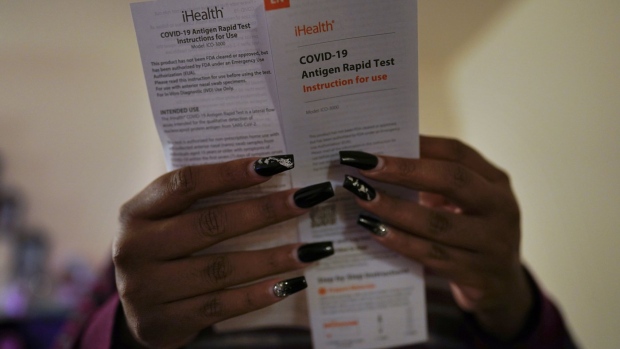 WASHINGTON — Eight-year-old Brooklynn Chiles fidgets on the hospital bed as she waits for the nurse at the U.S. Children’s National Hospital. The white paper beneath her crinkles as she shifts to look at the medical objects in the room. She’s had coronavirus three times, and no one can figure out why.

Brooklynn’s lucky, sort of. Each time she has tested positive, she has suffered no obvious symptoms. But her dad, Rodney, caught the virus — possibly from her — when she was positive back in September, and he died from it.

Her mom, Danielle, is dreading a next bout, fearing her daughter could become gravely ill even though she’s been vaccinated.

“Every time, I think: Am I going to go through this with her, too?” she said, sitting on a plastic chair wedged in the corner. “Is this the moment where I lose everyone?”

Among the puzzling outcomes of the coronavirus, which has killed more than 6 million people worldwide since it first emerged in 2019, are the symptoms suffered by children.

More than 12.7 million children in the U.S. alone have tested positive for COVID-19 since the pandemic began, according to the American Academy of Pediatrics. Generally, the virus doesn’t hit kids as severely as adults.

But, as with some adults, there are still bizarre outcomes. Some youngsters suffer unexplained symptoms long after the virus is gone, what’s often called long COVID. Others get reinfected. Some seem to recover fine, only to be struck later by a mysterious condition that causes severe organ inflammation.

And all that can come on top of grieving for loved ones killed by the virus and other interruptions to a normal childhood.

Doctors at Children’s National and multiple other hospitals getting money from the U.S. National Institutes of Health are studying the long-term effects of COVID-19 on children.

The ultimate goal is to evaluate the impact on children’s overall health and development, both physically and mentally — and tease out how their still-developing immune systems respond to the virus to learn why some fare well and others don’t.

Children’s has about 200 kids up to age 21 enrolled in the study for three years and it takes on about two new patients each week. The study involves children who have tested positive and those who have not, such as siblings of sick kids. The subjects range from having no symptoms at all to requiring life support in intensive care. On their first visit, participants get a full day of testing, including an ultrasound of their heart, blood work and lung function testing.

Dr. Roberta DeBiasi, who runs the study., said its main purpose is to define the myriad complications that children might get after COVID-19 and how common those complications are.

Brooklynn is one study subject. So is 3-year-old Alyssa Carpenter, who has had COVID-19 twice and gets strange fevers that break out unexpectedly, and other unusual symptoms. Her feet sometimes turn bright red and sting with pain. Or she’ll lie down and point her little fingers to her chest and say, “It hurts.”

Her parents, Tara and Tyson Carpenter, have two other daughters, 5-year-old Audrey and 9-year-old Hailey, who is on the autism spectrum. As for many parents, the pandemic has been a nightmare of missed school, unproductive work, restrictions and confusion. But on top of all the anxiety so many parents feel lies the concern for their toddler. They don’t know how to help her.

“It was just super frustrating,” says Tara Carpenter, who is quick to add that no one’s to blame. “We’re trying to find out answers for our kid and nobody could give us any. And it just was really frustrating.”

Alyssa would wail in pain from her red burning feet or whimper quietly. She’d come down with a fever, but suffer no other symptoms and be sent home from school for days, ruining Carpenter’s work week. But then in ballet class, with her pink tights and tutu, she’d seem totally normal.

In the past few months, symptoms have started to subside and it’s giving the family some relief.

“After the fact, what do we do about this?” asks Tara Carpenter. “We don’t know. We literally don’t know.”

For some families in the study, the child suffering from long COVID is the easy one during the hospital visits.

One recent day, another family finds that it’s the older sister Charlie who dissolves into tears because she doesn’t want blood drawn while younger sister Lexie, used to being prodded by nurses and doctors, hops up on the table. The family dynamics of COVID-19 are tough: The sibling with the illness may get more attention, which can create problems for the others. Exhausted parents struggle with how to help all their children.

Herbert asks the kids about fatigue, sleep, pain, anxiety, depression and peer relationships. Do they have memory concerns? Are they having a hard time keeping things in their brains?

“There’s this constellation of symptoms,” she said. “Some kids are incredibly anxious about getting COVID again.”

She said psychological symptoms are among the most common, and it’s not just the kids with COVID-19, it’s their siblings and parents, too.

Danielle Chiles feels the stress. She’s a single mother working full time, grieving the loss of her partner and trying not to seem too depressed in front of her daughter. The decision to enroll her daughter Brooklynn in the study was motivated by wanting to draw attention to the need for vaccines, particularly in the Black community.

“My baby keeps getting it,” she said. “Can’t the people around us try to protect her?”

Brooklynn whimpers when she hears she has to get blood drawn: “Do you have to?”

“If her daddy was here, he’d take her to Dave & Busters after this,” Chiles says, before lowering her voice so her daughter can’t hear what she’s going to say. Her husband, Rodney Chiles, wasn’t vaccinated.

He had qualms, like many do, about the vaccine and was waiting to get it. Shortly after Brooklynn tested positive during the run of the Delta variant, he started feeling sick and went downhill fast. Chiles had pre-existing conditions, too, which accelerated his death. He was 42.

“And then he called us on a Sunday. He was like, ‘They are about to intubate me because I can’t keep my oxygen up. And I love y’all and Brooklynn, forgive me,’” she said. It was the last time he talked to them before he died.

“I’ll tell you what,” Danielle Chiles says. “The only reason I’m still here is because I have a child.”

On school days, Chiles picks up Brooklynn from Rocketship Rise Academy Public Charter School in Southeast Washington. They walk hand-in-hand to the car for a short ride before she resumes working for a nonprofit organization.

One recent day after school, as Chiles had a Zoom meeting in her bedroom office, Brooklynn munched popcorn and talked about how she and her dad bought a pair of tennis shoes and balloons for her mom last year on Mother’s Day. They forgot her mom’s shoe size and they had to come back home and check the size. She giggles as she tells it.

In her room, there’s a big photo of her dad and her, though she usually sleeps in bed with her mom now.

“Even though kids aren’t as sick, they are losing,” said Chiles. “They’re losing parents, social lives, entire years. Yes, kids are resilient, but they can’t go on like this. No one is this resilient.”