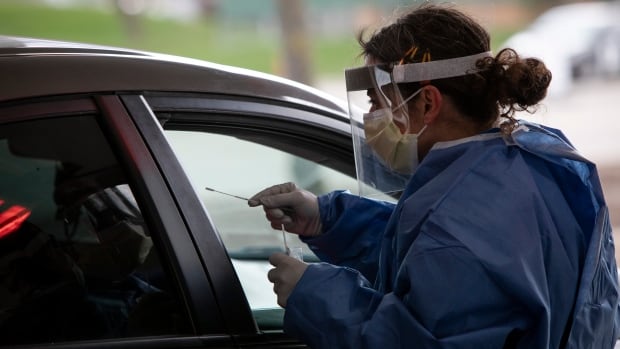 Ontario reported an additional 149 cases of COVID-19 on Wednesday, a relative decrease after two straight days with new case numbers not seen since late July.

The drop, though, comes as the number of test samples for the novel coronavirus processed by the province’s labs fell below 18,000 for first time since Aug. 5 — also a Wednesday following a long weekend.

Ontario has consistently logged daily testing figures in the mid-20,000 range, on average, since June, though decreases in the days immediately after long weekends have been common throughout the pandemic.

In today’s report, Toronto, Peel and Ottawa were once again of particular note with 50, 41 and 16 newly confirmed infections, respectively. York Region also saw another 13.

Twenty-eight of Ontario’s 34 public health units saw five or fewer additional cases, while 21 of those 28 had none, Health Minister Christine Elliott noted in a series of tweets.

There have now been 43,685 confirmed cases of COVID-19 in Ontario since the outbreak began in late January. Of those, around 90 per cent are considered resolved. An additional 136 infections were marked resolved in today’s report.

There are about 1,540 confirmed, active cases of the illness provincewide.

Premier Doug Ford said Wednesday that provincial officials are “concerned about [the] numbers,” and are keeping an eye on them.

“If everyone focuses on the guidelines and protocols, then we shouldn’t have a problem,” Ford said.

The premier said the province isn’t currently considering rolling back reopenings on a provincial level, but did note that individual regions have the option to enact measures like shutting bars early.

A new report finds immigrants, refugees and other newcomers accounted for nearly 44 per cent of Ontario’s COVID-19 cases in the first half of the year.

That’s despite the fact overall testing rates were lower for those groups, and that they comprised just one-quarter of the population.

Immigrants and refugees who worked in health-care, especially women, accounted for a disproportionate number of cases.

She adds many also face language barriers and are more likely to live in crowded and multigenerational households, making it more difficult to isolate when cases occur.

The leaders of the two provinces hardest hit by the COVID-19 pandemic met in Mississauga, Ont., Wednesday to discuss economic recovery and health preparedness.

Ford and Quebec Premier Francois Legault convened an inaugural summit to talk about what they see as key areas for co-operation.

Ford told reporters the two provincial leaders are coming forward with a message “of unity and cooperation. Ford said Ontario and Quebec are uniquely positioned to fight “U.S. economic protectionism” and negotiate with the federal government.

“Together, we are a political and economic powerhouse,” Ford said.

Both premiers said they want to see increased health-care funding from the federal government.

“That means the federal government needs to step up with an increase in the federal health transfer,” Ford said.

“We really need Ottawa to do its part in financing healthcare.”

Both provinces’ ministers of health, finance and infrastructure were also slated to attend the summit, along with other officials.

Legault said the two provinces have shown solidarity as the health crisis unfurled in recent months.

“We have a lot to learn from each other, and collaboration between our governments will remain critical as we strive to recover our economies safely while preparing ourselves for a potential second wave,” he said in a statement.

Meanwhile, the principal of an Oakville elementary school says a staff member tested positive for COVID-19 just days before students returned to class.

Gail McDonald said in a notice to parents that Oodenawi Public School was informed of the positive test on Monday.

She says the individual was present during staff PA Days at the school last week and that no students were exposed to the virus.

Staff who had close contact with the individual have been ordered by public health to self-isolate for 14 days.

The principal says the school underwent enhanced cleaning ahead of its reopening yesterday.

Under provincial guidelines, all schools are required to disclose COVID-19 cases to parents while protecting personal privacy.