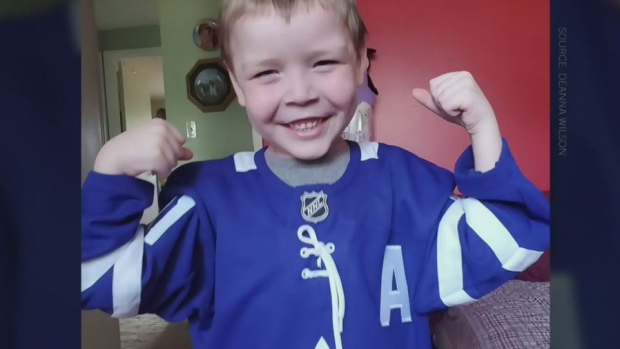 TORONTO — Four-year-old Liam Wilson lives with cystic fibrosis, and while the condition can affect a person’s overall health, he says he’s “strong as a tree.”

That’s also the title of his new book, “Liam, Strong as a Tree,” inspired by his real life.

The book, co-authored by Meghan Behse and illustrated by Leesa Ervin, depicts a young boy and his journey attending his first year of school while battling cystic fibrosis.

In the story, Wilson’s classmates show compassion and support to remind him of his own strength during a troubling time with the illness. Speaking about the new book, Wilson told CTV News on Saturday, “It’s about me and cystic fibrosis, going to school, meeting all my teachers and friends.”

Cystic Fibrosis Canada says the condition is a genetic disorder that affects the cells that produce mucus, sweat and digestive juices that are normally thin and slippery. However, in people with cystic fibrosis, these fluids become sticky and thick, plugging up tubes, ducts and passageways in the lungs and pancreas.

Although the severity of the disorder differs from person to person, the average lifespan for people who live to adulthood with cystic fibrosis is about 40 to 50 years. Because of medical advancements over the past decades, people with the condition can now live longer and healthier lives.

“We hope to make an impact and have others know more about cystic fibrosis,” Wilson’s mother, Deanna, told CTV News. “We want others to know that it’s OK to be different and stand out.”

She says the book has received a positive response and has sold almost 1,000 copies.

According to Cystic Fibrosis Canada, an estimated one in every 3,600 children born in Canada has cystic fibrosis, and more than 4,100 Canadian children, teens and adults visit specialized cystic fibrosis clinics.