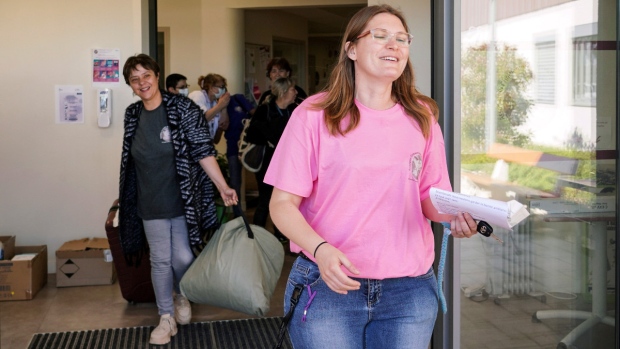 LYON, FRANCE — As the coronavirus scythed through nursing homes, cutting a deadly path, Valerie Martin vowed to herself that the story would be different in the home she runs in France.

The action she took to stop the virus from infecting and killing the vulnerable older adults in her care, was both drastic and effective: Martin and her staff locked themselves in with the 106 residents.

For 47 days and nights, staff and residents of the Vilanova nursing home on the outskirts of the east-central city of Lyon waited out the coronavirus storm together, while COVID-19 killed tens of thousands of people in other homes across Europe, including more than 9,000 in France.

“I said, ‘No. Not mine. My residents still have so much to live for,'” Martin said in an interview. “I don’t want this virus to kill them when they have been through so much.”

On Monday, Martin and 12 colleagues who stayed in the home for the full duration ended their quarantine with hugs of celebration and singing, and with an uplifting victory: Coronavirus tests conducted on the residents and staff all came back negative. The carers, who nicknamed themselves “the happily confined,” left in a convoy of cars, sounding horns and heading for reunions with families, pets and homes.

“We succeeded,” Martin said. “Every day, every hour, was a win.”

While COVID-19 killed people by the dozens at some other homes, Martin said there were just four deaths at Vilanova during their lockdown and that none appears to have been linked to the virus. The average age of residents at the home is 87 and number of deaths was not unexpected, she said.

Because staff and residents were locked in together, Vilanova didn’t have to confine people to their rooms like other homes to shield them from the risk of infection brought in from outside. That spared residents the loneliness that has been agonizing for others. Vilanova allowed residents to continue to mingle and to get fresh air outside.

Martin said she didn’t want their residents to feel like “prisoners” and that it wouldn’t have felt right to her had she continued to come and go from the home while depriving them of their liberty during France’s lockdown, in place since March 17.

Residents were confined to their rooms for two days at the beginning while staffers gave the home a thorough cleaning, and that proved “a catastrophe,” Martin said.

“In two days, we already saw people who started no longer wanting to eat, people who didn’t want to get up, people who said, ‘Why are you washing me? It’s pointless,'” she said,

In all, 29 of the 50 staff volunteered to stay, bringing pillows, sleeping bags and clothes on March 18 for what they initially thought might be a three-week stay but which they subsequently opted to extend. Other staff came from outside to help and were kept apart from residents and made to wear masks and take other protective measures to prevent infections.

The carers slept on mattresses on the floor. Martin slept in her office. One of the volunteers left a 10-month-old baby at home. The team tallied the days on a blackboard marked: “Always together with heart.”

Martin said her top priority now is to console her estranged cat, Fanta. And one of the weirdest moments of the lockdown was climbing back into her car and hearing the same tune on the CD player — Limp Bizkit’s “Mission Impossible” soundtrack — that she had been listening to when she parked seven weeks earlier.

“It was a bit like entering a holiday camp,” she said. “Living a lockdown with 130 people is extremely rewarding.”