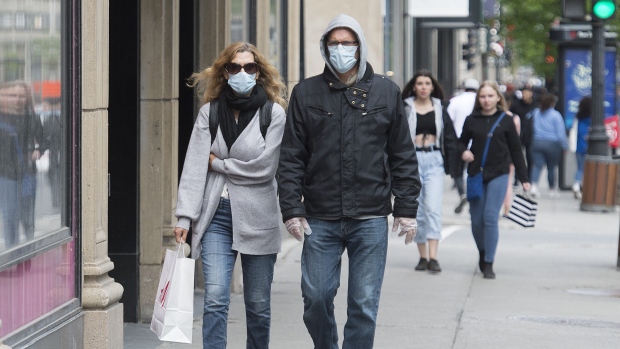 TORONTO — Despite public health officials around the world urging individuals to wear face masks to prevent further spread of COVID-19, there have been several claims posted on social media and printed on posters that suggest wearing a face mask is more dangerous to the wearer’s health than contracting the virus. But a Canadian doctor says those claims are easily debunked.

In one post from earlier in June that has been shared thousands of times on Facebook, a graphic lists a number of supposed health risks of wearing a mask, including decreasing the wearer’s oxygen intake, and increasing their inhalation of toxins and carbon dioxide. The post claimed that would eventually cause the mask wearer’s immune system to “shut down.”

That post has since been flagged as containing false information by Facebook’s independent fact-checkers, according to a pop-up message.

Another popular Facebook post, which has been shared more than 10,000 times, claims that people’s immune systems will become weaker the longer they wear face masks.

In Toronto, several posters recently spotted on park signs and bridges in the Don Mills area claim that wearing a face mask is “a bigger threat to your health than COVID-19.” The signs also suggest that covering the mouth increases levels of carbon dioxide in the body and promotes hypoxia (oxygen deprivation), which can impair brain activity.

In response to these claims, Dr. Iris Gorfinkel, a family physician and medical researcher in Toronto, described them as “nothing short of frightening.”

Gorfinkel stressed that wearing a face mask is safe for the vast majority of individuals and should be done to curb the spread of COVID-19.

“The data is very, very clear that for countries that have adapted this practice [of wearing face masks] and the people have got into it, they don’t just see lower numbers of diseases, they see fewer hospitalizations, and far less mortality,” she told CTVNews.ca during a telephone interview on Tuesday.

The suggestion that wearing a face mask will decrease oxygen intake is simply false, according to Gorfinkel. She said the public is being asked to wear face coverings that are breathable and looser fitting than the N95 respirators worn by health-care professionals.

“These are loose-fitting masks. The air in front of them, and the air within the mask, is no different in terms of oxygen or carbon dioxide levels,” she explained.

Gorfinkel said the mask may cause a difference in humidity in the air surrounding the face, but that won’t cause any harmful effects for the wearer.

Even if some users experience a bit of resistance in breathing in oxygen due to the physical barrier in front of their nose and mouth, Gorfinkel said it would be minimal because the masks are not designed to be airtight against the face.

“Doctors wear masks that are much heavier than that, N95s, and I’m included in that group, and when I’m seeing patients, I’ve worn them for hours on end with absolutely no change,” she said.

IS ANYONE AT RISK?

Gorfinkel said only a small minority of people may experience negative health outcomes from wearing a face mask. She said they can be people with chronic obstructive pulmonary disease (COPD), an inflammatory lung disease sometimes found in long-time smokers, which causes obstructed air flow from the lungs.

“Their air exchange is hugely compromised,” she said. “So looking at a group of them, only the very most severe of them had any problems with a N95. So you’re talking about a very small segment of the population.”

Gorfinkel said another group of people who may experience difficulty wearing face masks are those who may have suffered psychological trauma related to their faces being covered.

“Those are the individuals who, if they put something in front of their face, feel a form of almost a claustrophobia,” she explained. “It’s very confining, and it just feels as though it could be even an extension of PTSD for some individuals who’ve suffered the trauma of having someone place their hand over their face.”

Again, Gorfinkel emphasized that this only impacts a small minority of the population and for most individuals, wearing a face mask is safe for their own health and for the health of those around them.

Finally, Gorfinkel said the claim that wearing a face mask will increase the wearer’s risk of inhaling toxins is highly unlikely and she hasn’t heard of any evidence to suggest this is occurring.

While there are many different types of masks made of different materials now available, she said she’s not aware of any cases where an individual has inhaled a harmful toxin from the mask itself.

“Theoretically, is it a possibility that we could be breathing in, I don’t know, carcinogenic stuff or something? I suppose it’s theoretical,” she said. “But what matters is, would that translate into really negative health outcomes in the kind of numbers that we’re seeing infected by COVID?”

As for the suggestion that toxins released from the body are then re-inhaled because of the mask, Gorfinkel said that wouldn’t happen because there is enough airflow around the masks, which allows the user to breathe in the first place.

There is a risk, however, of bacteria accumulating on the inside of the mask if it’s not properly washed between uses or thrown out after a single use in the case of disposable paper masks.

In conclusion, because there is no risk of decreased oxygen levels and increased inhalation of carbon dioxide or toxins, mask-wearers’ immune systems will not “shut down” as a result.

Gorfinkel reiterated that the countries that have embraced face masks have fared better in preventing the spread of COVID-19 than those that haven’t.

“As a society, we owe it to one another to make sure that we protect each other in the best way we can,” she said. “And one of those best ways turns out to be widespread use of masks. If we’re to reopen as a society successfully, we must do that.”