PARIS, FRANCE — A British man managed to pass on the coronavirus to at least 11 other people without ever setting foot in the epicentre of the outbreak in China, in an infectious journey that shows how the deadly virus can spread rapidly around a globalized world.

The adult British citizen, who has not been named publicly, caught the virus while attending a conference in Singapore and then passed it on to several compatriots while on holiday in the French Alps, before finally being diagnosed back in the U.K.

Of those infected by the man, five have been hospitalized in France, five in Britain and one other man on the Spanish island of Mallorca.

How did he pass on the new coronavirus so rapidly in so many different places? 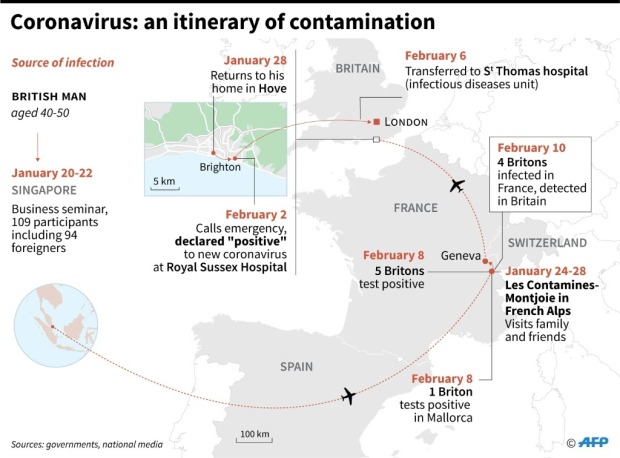 The man attended a business conference in Singapore from 20-22 January. More than 100 people took part in the conference, including at least one Chinese national from Hubei province, the epicentre of the epidemic that has now left more than 900 dead.

He then travelled on to France to spend some days from January 24-28 at the ski resort of Contamines-Montjoie in the Alps with a group of other British citizens staying in two apartments in the same chalet.

Stricken with fever after his return to the south of England, the man then went to a medical centre in the southeastern town of Brighton where he was diagnosed with the coronavirus.

On February 6 he was transferred to the infectious diseases unit at the hospital of St Thomas in London.

Five other people who had contact with him at the French ski chalet were then confirmed by the British health authorities to be infected.

Some of the staff from The Grenadier pub, which the man went to just before he was hospitalised, have also been placed in isolation. But the pub has stayed open.

A medical centre in Brighton said Monday it had temporarily closed for “an urgent operational health and safety reason”.

The BBC and Sky News said one of the centre’s staff members had tested positive for the virus, although this was not officially confirmed.

Health Minister Agnes Buzyn said on February 8 that five British nationals, including a child, who stayed at the chalet with the man had tested positive.

Six other Britons staying in the same chalet were also hospitalised for observation.

“They show no serious signs” of those infected having any threat to their lives, added Buzyn.

Business owners in the Contamines-Montjoie resort have been keen to avoid any exaggerations of the threat as French families prepared to descend on the area for the half-term ski holidays.

Three schools attended by one of the British infected — the child aged nine — are closed and 100 have been people tested. All the results have been negative so far.

Similar efforts have been made to track down passengers who took a flight from Geneva — the closest large airport to Contamines-Montjoie — with the man when he went back to Britain on January 28.

One member of the group he stayed with in France then sought medical help after returning to his home in Mallorca. The contamination took place between January 25 and January 29, according to the Spanish authorities.

The man in Mallorca is “currently in good health. He shows practically no symptom,” said Fernando Simon, an official from Spain’s health ministry.

The Mallorca man’s wife and two daughters aged 10 and 7, who were also hospitalised for tests, have shown no sign of infection.

Experts said that the speed of the transmission showed the potential for the novel coronavirus to become a global pandemic.

“The recent report of transmission to British nationals in France are a worrying but perhaps not unexpected development,” said Paul Hunter, Professor in Medicine, University of East Anglia.

“This reinforces the fact that transmission is no longer restricted to China. It is still too early to know when and if the epidemic will become pandemic and whether we will see start to see sustained person to person transmission in Europe.”