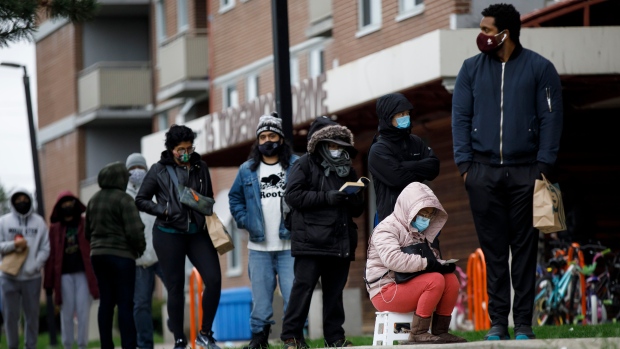 TORONTO — Pharmacists across Canada are calling for increased access to the country’s supply of COVID-19 vaccines as lineups for doses mount.

In places like Toronto, London, Ont. and Victoria, B.C., lineups for vaccines can be seen circling the block, prompting pharmacists to speak up about their own unused capabilities to help.

“That’s just not an equitable system,” Khalid Bhatti, a pharmacist in Mississauga, Ont., told CTV News. “We’re kind of having people go and line up like animals to get the vaccine when we’ve got channels in place.”

In April, the Canadian Pharmacists Association called for their further inclusion in Canada’s vaccine rollout, arguing that that “thousands of pharmacies across the country are still waiting to get involved.”

“We are advocating very strongly that all pharmacies should have access to all types of vaccines and there are really no limitations as to what vaccines pharmacists can administer,” said Sandra Hanna, CEO of the Neighbourhood Pharmacy Association of Canada.

In the Toronto and Peel regions, 16 pharmacies began to administer the Pfizer vaccine on Friday, but are only given 150 doses per week as part of the pilot program.

Many pharmacists say they can now easily handle administering the Pfizer vaccine since a change in its guidance indicates it can now be stored for up to five days in fridges that pharmacies already have.

Even the pilot program’s rollout is frustrating to pharmacists. Originally, they were told that eight of the pharmacies for the program would be independent, but now the majority are big-box pharmacies.

“They gave it to corporate stores and they took the independent out, which doesn’t make sense to me. Independents have been doing a great job,” Mina Maseh, owner of WestKing Pharmacy in Toronto, told CTV News Toronto.

Bhatti’s pharmacy was also not included in the pilot program, though he is in a hot spot. He wants vaccine supply to be delivered fairly in areas with high infection rates.

“If you take a look at where I am, there’s only three or four pharmacies in a three-kilometre radius that are vaccinating,” he said.

Ontario pharmacists aren’t the only ones frustrated with the vaccine rollout. In Victoria, pharmacist Jason Cridge is also struggling to understand how the vaccines are distributed.