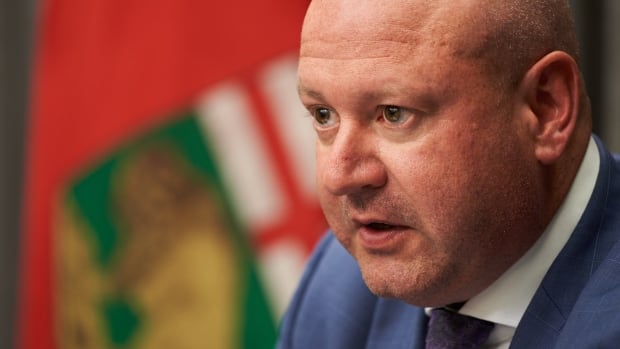 Gathering size limits will drop to a maximum of five people in the Winnipeg area starting Monday, the province says — the lowest the province has gone so far in its effort to stop the spread of COVID-19.

The new restrictions will be in effect for two weeks and gathering limits will apply indoors and outdoors, said Dr. Brent Roussin, Manitoba’s chief public health officer, as he announced a suite of tougher new rules for the Winnipeg metropolitan area.

Stand-alone nightclubs, bars and beverage rooms will be closed, as will casinos, VLT lounges and bingo halls.

The changes come amid climbing daily case numbers in Manitoba, especially in Winnipeg. On Friday, the overall test positivity rate in the province was 5.2 per cent, and 6.8 per cent in the Winnipeg metropolitan region.

“We need to make this change, this sacrifice, for two weeks,” Roussin said Friday.

More indoor businesses will also be required to keep logs of people who visit in order to help with contact tracing, Roussin said, including theatres, museums, galleries, libraries and fitness facilities.

The number of spectators at after-school activities and all sporting events will be reduced to 25 per cent of a site’s capacity.

Roussin said the rationale for closing businesses like bars while leaving restaurants, for example, open was based on how COVID-19 has been spread so far.

“A lot of that is based on where we’ve been seeing contact and cases and transmission events, and so we really wanted to focus on those areas,” he said.

Read a previous version of this story below

Manitoba’s chief public health officer will make an announcement about COVID-19 on Friday afternoon, after back-to-back days of record-high case numbers and a warning Winnipeg will see tighter restrictions.

The province initially scheduled the update for 12:30 p.m., but pushed the time back on Friday morning. It then issued a third media release saying Friesen would no longer participate in the news conference as planned, but later said a scheduling conflict was resolved and the health minister will speak at the conference.

On Thursday, Roussin said further restrictions are coming for the Winnipeg metropolitan region as early next week. The warning came more than two weeks after the area was moved to the orange, or restricted, level on the province’s pandemic response system, and more than a week after additional rules were brought in for licensed restaurants and bars in the region.

While Roussin said it’s unlikely the entire Winnipeg region will be moved to the red, or critical, level, there are restrictions that can be tightened under the current orange level.

The incoming rules could affect things like sporting activities, as well as retailers, gyms, movie theatres and other non-essential businesses that were impacted by shutdowns this spring, he said.

Meanwhile, all licensed personal care homes in the Winnipeg area were moved up to the red, or critical, level on Thursday, which brought new rules for care home admissions.

Manitoba reported its worst daily COVID-19 numbers of the pandemic this week, including three consecutive days of record-breaking daily case counts. On Thursday, the province announced its highest daily tally yet: 173 new cases, including 133 in Winnipeg.

The province also announced another COVID-19 death on Thursday. The death of a Winkler man in his 40s with underlying health conditions was the province’s 38th COVID-19 fatality since the pandemic began, and the 11th in the past six days.