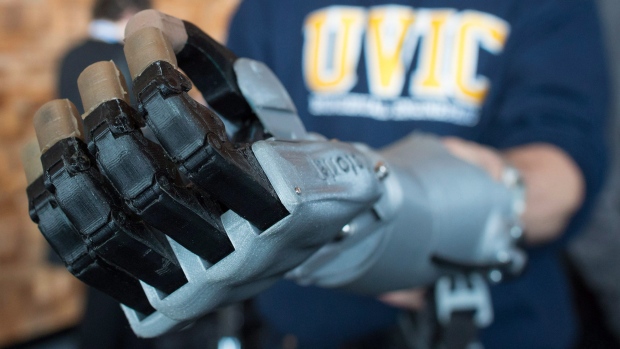 VICTORIA — Nick Dechev says amputees randomly show up at his laboratory at the University of Victoria and ask for help.

Dechev, a mechanical engineering professor and executive director of the Victoria Hand Project, said most times he can offer them assistance from the lab, which designs 3D-printed prosthetic hands.

Over the next three years, he expects to help 200 more amputees and 160 children with scoliosis, a curvature of the spine, using 3D-printed technology developed in Victoria.

Dechev said a $1 million grant announced Tuesday will help the university’s engineers expand production of the low-cost prosthetic hands and test and provide scoliosis braces to help people in communities where artificial limbs and back braces are difficult to get in Canada and the United States.

He said since 2017, the Victoria Hand Project has provided 3D printed prosthetic hands to amputees in seven countries including Guatemala, Ecuador and Uganda, but the expansion targets Yellowknife and Whitehorse in Canada and Chicago, Los Angeles and Fairbanks, Alaska, in the U.S.

“We have actually helped 12 people here in B.C., and we’ve done it off the side of our desk,” Dechev told a news conference at the university laboratory. “Some of them actually showed up to our door and just said, ‘Hey, what about me?’ “

He said this summer at a village in Guatemala a mother showed up unannounced at a hand fitting clinic and asked if the engineers could help her daughter, who was missing her left hand. Dechev said a young boy missed an appointment for a 3D printed left hand, but the girl was fitted on site.

He pointed to a photo of the smiling girl with her new prosthetic hand.

“It’s exciting because we’re really one of the innovators who’s been pushing the envelope on trying this for the past several years,” Dechev said. “We’re very excited about the opportunity it gives to amputees.”

He said the 3D printing and scanning technology is able to design a perfect fit for amputees.

“We think that this prosthesis is actually superior in terms of function than many other traditional prostheses,” said Dechev holding a lightweight printed limb, adding that it costs about $106 to produce.

“Three D printing is an emerging technology and we’re finding new ways to utilize it,” said Dechev. “In doing this cost effectively this enables this to be deployed to a great many people. What we want to do is provide services for remote communities in Canada and underserved populations in the U.S.”

This report by The Canadian Press was first published Dec. 3, 2019.