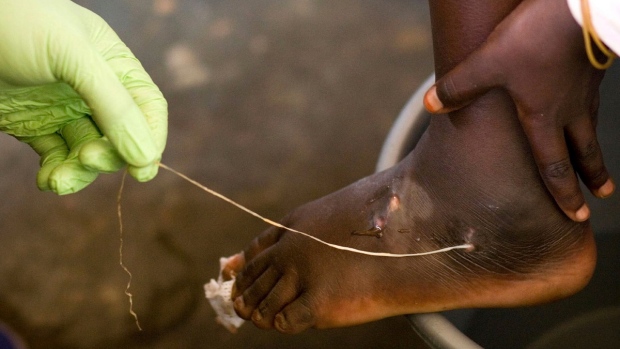 DAKAR, SENEGAL — Just over two dozen people in the world are infected with Guinea worm, according to a new report that says community programs are close to eradicating the disease in which a metre-long worm slowly emerges from a blister in a person’s skin.

The U.S.-based Carter Center, which leads the eradication campaign, says just 27 cases were reported in 2020 in six countries in sub-Saharan Africa, or half the number of cases in 2019. The centre said animal infections also showed a 20% decline.

The reduction in cases is welcome in the health community as the coronavirus pandemic surges globally. Despite cuts to many programs worldwide, The Carter Center said its community-based program to eradicate Guinea worm remained up to 95% operational.

“We’re reporting a 50% reduction in human cases, down to only 27 people in the world last year that had Guinea worm. And that’s compared to in 1986 when there were 3.5 million people annually reporting Guinea worm disease across about 21 countries, mostly in sub-Saharan Africa, but also in the Middle East and in Asia,” Adam Weiss, director of The Carter Center’s Guinea Worm Eradication Program, told The Associated Press.

According to provisional figures, Chad had about 12 cases in 2020 followed by Ethiopia with 11. Angola, Cameroon, Mali and South Sudan had one case each.

Weiss said the COVID-19 pandemic complicated logistics and supply chains, reduced abilities for research activities and made it difficult to move staffers, but he cited the longstanding work and community involvement in fighting Guinea worm for keeping operations going last year.

“We are quite fortunate in that this is a community-based program, and so the volunteers have remained active throughout the entire pandemic,” he said.

Unlike other diseases that are controlled by medicines or vaccines, Guinea worm can be eradicated by training people to filter and drink clean water. The challenges ahead will be education, surveillance and continued access to safe drinking water.

Contracted by drinking infected water, Guinea worm disease affects some of the world’s most vulnerable people. The 3-foot-long worm is asymptomatic and incubates in people for up to a year before painfully emerging, often through extremely sensitive parts of the body.

Guinea worm is poised to be the second human disease to be eradicated after smallpox, according to The Carter Center. The World Health Organization warns that the remaining cases can be the most difficult to control as they usually occur in remote and often inaccessible areas.