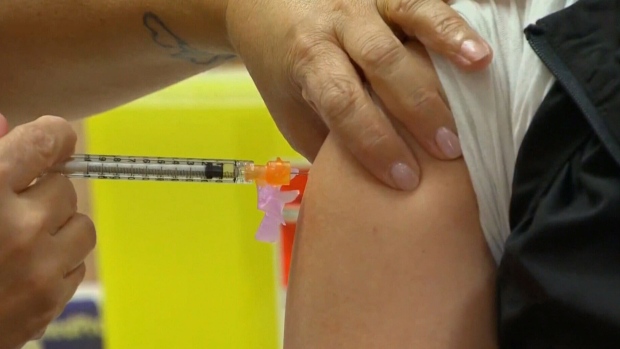 The Canadian Centre for Vaccinology at Dalhousie University is trying to complete the second stage of the Phase 1 trial for a vaccine developed by Edmonton-based Entos Pharmaceuticals but says it’s hard to find volunteers as more people get shots.

The centre’s director, Dr. Scott Halperin, said the search is on for about a dozen more people aged between 18 and 55 who haven’t been vaccinated yet and who haven’t been exposed to the virus. They are needed to complete the initial phase of the trial, which requires a total of 36 participants.

In an interview Wednesday, Halperin said recruitment remains a challenge, especially given the province announced an acceleration of its vaccine rollout this week, with plans to administer second doses two to four weeks earlier than originally planned.

He also noted that vaccination rates will only increase with vaccine now available in Nova Scotia to people 20 years of age and older.

“The rollout program for the vaccine is ahead of schedule, which means there are less people who would be eligible for a clinical trial,” said Halperin. “There is a decreasing number of people who are still not immunized.”

John Lewis, CEO of Edmonton-based Entos, said in an interview that completing Phase 1 is the “gateway” to further clinical development of the vaccine.

“Obviously if we are not able to recruit these patients, we will probably move the trial to a different country,” Lewis said. “It could substantially delay the development of this vaccine.”

He said as things stand, Phase 2 of the trial will have to be conducted outside of Canada because it requires about 600 participants.

The Covigenix VAX-001 vaccine is based on DNA and is similar to the mRNA vaccines developed by Pfizer-BioNTech and Moderna.

However, Lewis said his company’s product is a single shot and doesn’t need to be stored at the lower temperatures required by the other vaccines, which would make it easier to deploy in rural areas, especially in developing nations.

The completed first stage of the Halifax trial involved giving a low dose of the vaccine to evaluate it for safety, while the second stage aims to administer an intermediate dose for a similar evaluation. Both stages also include a placebo control group.

Lewis said there are ethical considerations given the availability of vaccine and the potential risks of contracting the virus. While the yearlong study needs people to stay involved for at least 42 days to collect reliable data, he said people can withdraw at any point and ask whether they were given a placebo or a vaccine. In either case, they can then seek an approved vaccine.

And while people can’t be paid to participate in clinical trials they can be reimbursed for expenses and Lewis said his company is offering participants in the Halifax trial a $50 gift certificate as an incentive.

“We are hoping to get young healthy adults whose overall risk from COVID-19 is very low and who want to contribute to having a made-in-Canada solution,” Lewis said.

Halperin, who is not connected to Entos, said the vaccinology centre’s role is to present the pros and cons of participation to people who may be interested, adding that at this point it’s simply about asking for help in the development of additional vaccines.

He said the development of a Canadian vaccine is important because it would provide the country with options, especially if it’s determined that further immunization will be required at some point.

“I think it’s very important, not just for this vaccine manufacturer but for others, to continue the process to get more vaccines out to the market,” he said. “We are not there globally, and until we are there globally, Canada continues to be at risk.”

As for larger clinical trials, Halperin said companies will have to look abroad because of high vaccination rates among those in older age groups in Canada.

“One would not be able to do a large clinical trial, and particularly where you would want to do it with all age groups,” he said. “You couldn’t do that in Canada now.”

This report by The Canadian Press was first published May 27, 2021.