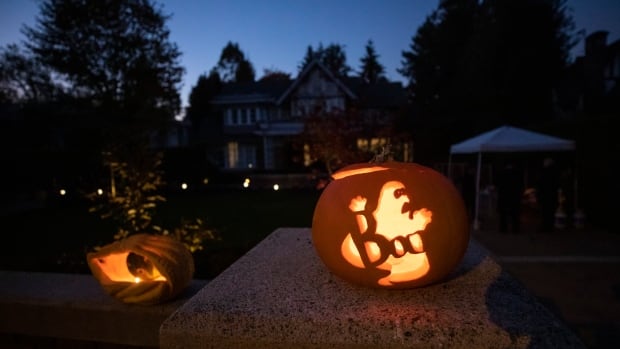 Spooky season fans, fear not: Halloween 2020 is not cancelled due to the global pandemic, Provincial Health Officer Dr. Bonnie Henry confirmed on Wednesday.

Speaking at a news conference, Henry said that while this won’t be the year to host a massive indoor Halloween party, there are still ways to safely mark the scariest night of the year.

“I think we can have Halloween this year, it’s just going to look different, like everything is looking different during this pandemic,” she said.

By way of comparison, the Los Angeles County department of public health has, effectively, cancelled Halloween, saying Halloween gatherings and haunted houses are not permitted.

Trick-or-treating is also not recommended by L.A. health officials, though watching a scary movie at a drive-thru and dressing up homes and yards are recommended as safe ways to celebrate.

Dr. Bonnie Henry says groups of trick-or-treaters will have to be kept small and candy likely left at the end of driveways. 0:35

Henry said the province will release guidelines on how to enjoy the night safely, but offered some early advice.

“I really think we need to think about small groups outside, not having somebody come into your house but having maybe the neighbourhood do something at the end of the driveway,” she said.

“Having pre-packaged treats for kids so that they’re not rummaging around in things. There’s lots of ways we can still celebrate, and I think it’s important for us to still celebrate during this time.”

Henry has told B.C. residents they should be easing up on social interactions as the fall approaches, reining in bubbles to five or six people in an effort to limit the spread of COVID-19. She emphasized the importance of keeping community transmission low to allow schools to safely reopen.