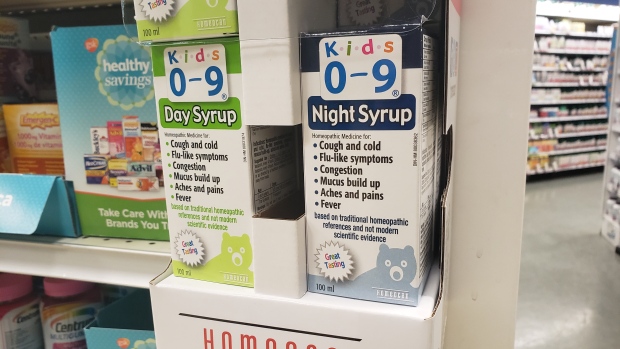 VANCOUVER — Late one night last winter, Nevin Thompson headed out to a drugstore in Victoria, B.C., to purchase some medication to alleviate his youngest son’s fever.

It wasn’t until he returned home that he realized he’d picked up and paid for a homeopathic product – the kind that are, by the manufacturers’ own admission, not scientifically proven to treat anything.

“You never expect to go into a pharmacy and buy homeopathic stuff. It doesn’t make any sense,” said Thompson, a freelance writer.

“When you’re dealing with kids, most parents are interested in stuff that works – like scientifically, rigorously tested.”

Under labelling rules that Health Canada has been enforcing since 2017, homeopathic products for children can’t claim to treat cough, cold and flu symptoms unless those claims are backed up by science – but critics say there remains a major loophole that makes it easy for parents to misinterpret the packaging.

According to the Health Canada website, the labelling requirements were intended to “give parents the clarity they need in choosing safe and effective products for their children.”

But years after the rules were imposed, some health care professionals question how much clearer the system really is for everyday people who might not understand the difference between mainstream and alternative medicine.

Homeopathic products for kids can be found at major drugstores, sometimes stocked side-by-side with scientifically proven treatments. Some are labelled as “for cough and cold” or “for flu symptoms,” despite a message on the box indicating they are not backed by scientific evidence.

Health Canada spokesperson Andre Gagnon said those products still comply with federal labelling rules because “for cough and cold” is not, according to the government, a suggestion that the products treat cough and cold symptoms.

Ian Bushfield, executive director of the B.C. Humanist Association, argued that amounts to a government “loophole” for the people profiting off homeopathy.

“When you see that product on the shelf in a pharmacy saying it’s ‘for’ cough and cold and fevers, the natural inclination – at least my inclination – is to read that as treating it,” Bushfield said.

He and others believe Health Canada’s requirements should be stronger so there’s no chance of parents misinterpreting the labels, especially if the products are being sold by health care professionals.

“In my personal opinion, it’s frustrating to see a pharmacy carrying this because it does give this an air of credibility,” Bushfield said.

Dr. Bernie Garrett is an associate professor at the UBC School of Nursing who studies alternative health remedies and deception in health care, and said he finds the approved labels on homeopathic products “very problematic” given what researchers know about their effectiveness.

He explains homeopathy as an extension of the concept that “like cures like,” which first emerged during medieval times. The idea is that you can treat a symptom by taking a substance that causes that same symptom, then heavily diluting it in water – often to the point that the end product doesn’t contain a single molecule of the original substance.

“The actual dilution is no different from what you’d get drinking water from your tap,” Garrett said.

One of the Health Canada-approved homeopathic products that’s currently sold in major pharmacies is called “Kids 0-9 Day Syrup,” which is said to be “for” everything from congestion to fevers.

The manufacturer, Homeocan, has not responded to questions from CTV News about its products and their effectiveness.

Garrett said the idea that any substance diluted to that degree would provide a health benefit is “ludicrous,” and noted some of the substances used in various homeopathic products wouldn’t be expected to do so regardless of their concentration.

“You can get a homeopathic remedy that includes a dilution of a piece of the Berlin Wall, which is supposed to be for separation anxiety,” he said. “It’s really a form of magical thinking.”

While it’s possible certain alternative health products could have legitimate uses that just haven’t been verified through testing, Garrett said the same can’t be said of homeopathy.

“There’s been hundreds of trials of homeopathic remedies, and all of the quality trials have indicated there’s no significant difference compared to placebos,” Garrett said.

B.C.-based drugstore chain London Drugs is among the pharmacies that stock homeopathic products alongside scientifically proven treatments, which the company said allows parents to make their own choices when it comes to caring for their families.

Chris Chiew, the general manager of pharmacies for London Drugs and a pharmacist himself, stressed that parents should speak to a pharmacist when deciding what products to purchase for their child.

“We always encourage parents to come talk to our pharmacist because every child is different,” Chiew said.

Asked whether a London Drugs pharmacist would ever recommend a homeopathic product for a sick child, Chiew said it “really depends on the situation.”

Some people, for their own reasons, don’t trust mainstream medicine and wouldn’t give their children cold and flu remedies that contain established analgesics and decongestants. Chiew said his company wants to offer people alternatives, provided those alternatives are deemed safe and are licensed by Health Canada.

For Nevin Thompson, who was in a London Drugs when he accidentally bought a homeopathic product for his son, the policy is still disappointing.

“I trusted London Drugs. That’s why I was so upset … I trust them for my computer needs, cheap furniture, juicers, large chocolate bars,” Thompson said.

“I would like to know how they could sell this stuff when it doesn’t work. How could you sell it?”