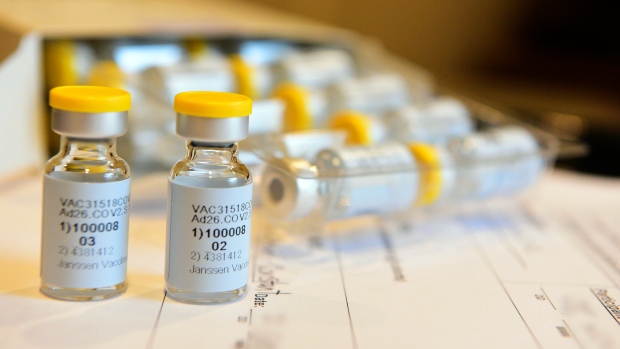 TORONTO — Health Canada says it “will not be releasing” the 310,000 Johnson & Johnson COVID-19 vaccine doses that arrived in the country in April due to a possible quality control issue.

In a statement issued on Friday, Health Canada said it has completed its quality review of the shipment and has decided not to distribute them to provinces to “protect the health and safety of Canadians” amid concerns over the Baltimore facility part of the vaccine was produced at.

The J&J vaccine doses were previously being held for review after arriving in Canada upon learning that a drug substance used in the vaccine was produced at the Emergent BioSolutions’ Baltimore facility. The plant had an error in March that led to millions of J&J doses being ruined.

The agency said the drug substance produced at the Emergent BioSolutions facility was used in the manufacturing of Canada’s shipment of Janssen vaccines, but noted that the final vaccines were manufactured at a different site located outside of the U.S.

“Health Canada was unable to determine that this shipment of Janssen vaccines meets the Department’s rigorous quality standards,” the statement read.

The announcement comes after the U.S. Food and Drug Administration (FDA) said on Friday that J&J must throw away millions of doses of its COVID-19 vaccine that were manufactured at the Baltimore facility.

Production of J&J’s vaccine at the Baltimore site was halted by the FDA after discovering that ingredients from AstraZeneca’s COVID-19 vaccine — also being produced at the plant at the time — contaminated a batch of J&J’s vaccine. An FDA inspection also found sanitary problems and bad manufacturing practices at the plant.

AstraZeneca’s shot is no longer being made at the Baltimore facility, and Health Canada previously said that the 1.5 million doses of AstraZeneca it had imported from this facility were safe and met quality specifications.

To ensure the safety of “any future vaccine supply” from the facility, Health Canada said it is planning an onsite inspection of the factory this summer.

“Until this inspection has been completed, Canada will not be accepting any product or ingredients made at this site,” Health Canada said.

The agency assured Canadians that any COVID-19 vaccines will only be released for distribution to the public once Health Canada is “satisfied that they meet the Department’s high standards for quality, safety and efficacy.”

At a press briefing on Friday, Joelle Paquette, director general for Public Services and Procurement Canada, said another shipment of J&J COVID-19 vaccines are expected to arrive in Canada by the end of June.

Paquette did not elaborate on the number of doses that would be in the shipment or where this batch of vaccines was being manufactured.