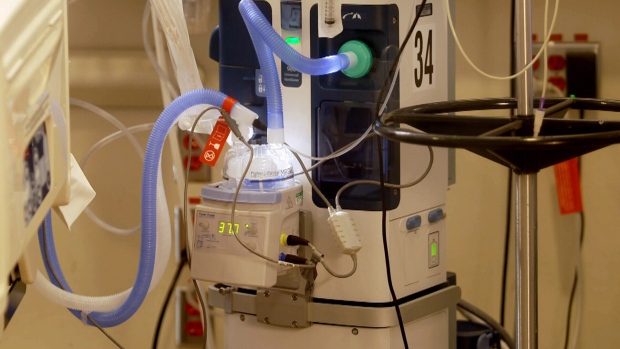 TORONTO — In the COVID-19 intensive care unit at Southlake Regional Health Centre in Newmarket, Ont., every single patient is on a ventilator.

It’s the ward where no one wants to end up, where patients are taken when the virus has made it impossible for them to breathe without a machine.

“It’s shocking, actually,” McNabb said. “And they’re not all surviving. You do take this home. It does weigh on your shoulders.”

Some patients have all but stopped interacting with the world around them. One woman showed signs of life only by looking towards the phone when her daughter called.

Right now, the oldest person in the ICU at Southlake is only 61. Many patients have been in medically-induced comas for weeks.

Working in the COVID-19 ICU is not only heartbreaking, but dangerous.

For some patients, health care workers try to get more oxygen into their lungs by turning them onto their stomach.

Making a patient “prone” is what the process is called. When a patient is flipped, they can draw more air because of the change in position.

However, it’s a risky manoeuvre for both patients and the teams of health-care workers who flip them. Respiratory therapists in particular have one of the most dangerous jobs.

“When we’re doing the proning, they’re connected to the life-support,” Ed Anderson, a respiratory therapist at Southlake, told CTV News. “If that circuit disconnects, it’s just going to shower (us) with all of that spray, which puts us at (a) high, high risk of getting COVID.”

This team in the ICU is used to life-and-death situations. But seeing so many patients take so long to recover — if at all — is taking its toll.

Anderson said he had to take himself to the emergency room at one point because of chest pain from his anxiety.

Patients not sick enough for ventilators are treated in a medicine ward, where health care workers watch them struggle to breathe.

Along with the alarmingly young ages, doctors are seeing COVID-19 patients who don’t have the regular symptoms of fever, headache and dry cough.

“There’s some that … come out with a different presentation completely,” said Dr. Stephanie Tse. “Neurological symptoms, or just generalized weakness.”

Tse says they are having to learn on the job.

When 84-year-old Leo Johnson initially came in to the hospital, it was believed he had neurological issues. Instead, he was found to be positive for COVID-19.

After a battle with the virus, he’s come out the other side as one of Southlake’s success stories. He was set to head home on Thursday.

Johnson said he’s never been away from his wife for 60 years of marriage, and is “glad to be going home.

“Overall, I’ve come out pretty good, compared to others,” he said.

For now, this large, regional hospital can handle the number of cases coming in, but there are fears of what may lie ahead.

“Our greatest fear is that people will no longer abide by, because of fatigue, these public health directives,” Dr. Barry Nathanson told CTV News.

“And all the work that we’ve done in preparing and mitigating and managing so far could easily be undone.”